Theatre Review: ‘Pygmalion’ presented by Thunderous Productions at the Howard County Center for the Arts 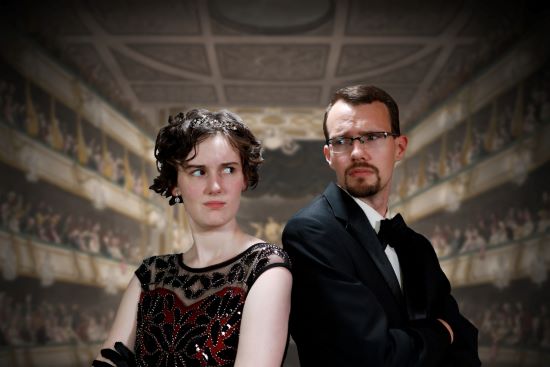 George Bernard Shaw’s comedy “Pygmalion” was presented this past weekend by Thunderous Productions. The play was later adapted into the musical classic, “My Fair Lady,” and the basic story tracks the same for both. “Pygmalion” has a different and more realistic ending which Shaw defended even when it first opened in 1914. The playwright was inspired by the Greek myth of Pygmalion, an artist who fell in love with one of his sculptures.

…a fine example of this classic comedy.

In Shaw’s tale, Henry Higgins (Daniel Dausman) is an expert of languages and dialects. After meeting a young and poor flower girl on the street, she comes to his home seeking lessons on proper speech and etiquette in order to get decent job in a flower shop.  He and his guest, Colonel Pickering (Andrew D. Filicicchia), wager on whether Higgins can teach the girl, Eliza Doolittle (Sarah Locander), well enough to pass her off as a duchess. The three develop a sometimes plutonic, and sometimes adversarial, relationship.  The two men have never figured out what will happen to Eliza when the bet is over. During her tutelage, a young man, Freddy Eynsford-Hill (Raymond Ritzau), falls in love with her. Eliza’s father, Alfred Doolittle (Andrew H. Enriquez) is a a dustman and a bit of a conman as well. He pays a call on Higgins and Pickering and gets them to give him five pounds to let Eliza stay with them.

The cast, despite the stage having only the barest of sets, transported us to the end of the Victorian Era in London. Locander was a most charming Eliza and Dausman’s Higgins was self-important and self-righteous and very prickly. Filicicchia gave us a polite, but still dense (especially about women), Col. Pickering. Alfred Doolittle was just cocky and Cockney enough as performed by Enriquez. Ritzau gave a solid performance as the obsequious Freddy.

Other notable performances were by Allie Pettigrew as Mrs. Peare, Higgin’s long-suffering housekeeper, and Trix Whitehall as Henry’s mother, Mrs. Higgins. Rounding out the rest of the cast with strong acting appearances were Cassie Thompson as Clara Eynsford-Hill, Freddy’s sister; Vicki Golding as Mrs. Eynsford-Hill, Freddy’s mother; and Lauren Venedam as the Parlor-Maid.

Director Rick Starkweather and Thompson, who was also the assistant director, conveyed the Shavian themes correctly and kept the pacing fast in a play with so much dialogue. Lighting and sound was done by Beatrix Whitehall, Allie Pettigrew, and Leilani Cartledge. I particularly enjoyed the choice of music and how it was interwoven into the scenes. Without much set, the lighting was of great importance and it was a great asset to the production. Interestingly, the cast was responsible for purchasing their own costumes (with a stipend from the company). Most were in period and very attractive.

“Pygmalion” is one of the cornerstones of modern drama and should be seen by anyone who loves theatre. With Shaw’s original ending, it has not only great humor but seems more like a slice of life.  Thunderous Productions presented a fine example of this classic comedy.

Running Times: Two hours and 30 minutes with one intermission.

“Pygmalion” ran July 16-17, 2022, presented by Thunderous Production at the Howard County Center for the Arts, 8519 High Ridge Road, Ellicott City, Maryland 21043. Go to their website for information about future productions.