Theatre Review: ‘SIX The Musical” at the The National Theatre in DC 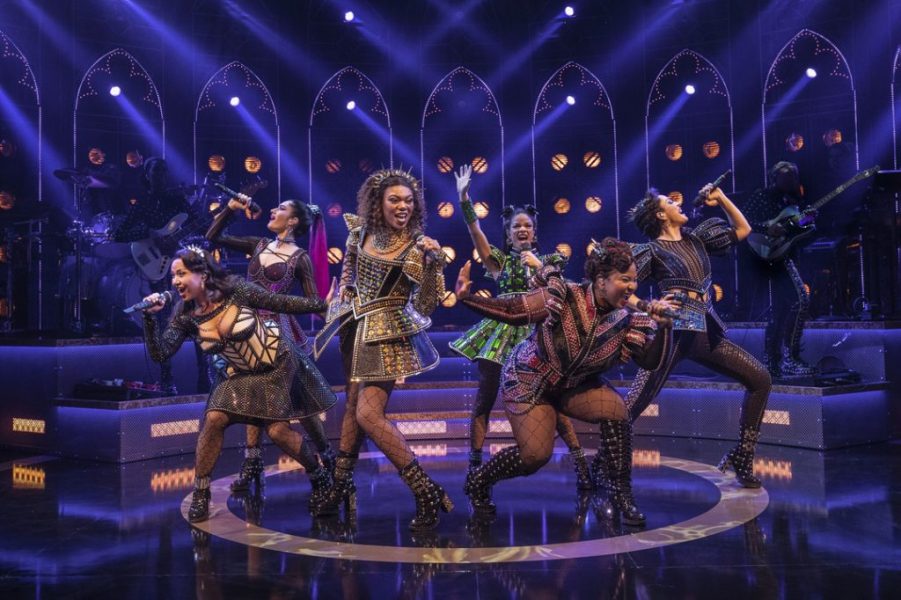 Most British school children recite the rhyme a few times a year to remember the date of each of Henry VIII’s wives: “Divorced, Beheaded, Died: Divorced, Beheaded, Survived.” Since the 2019 U.S. debut of “SIX,” the schoolyard rhyme has transformed into a pop-group, girl-power mantra. The show is lead by an all female cast and band. At the recent Tony Awards, “SIX” won for Best Original Score and Costume Design. The tour is taking the stage at The National Theatre in DC for an extended run.

…brought magic, energy, modernity, and fun to the stage with a cast of queens that we all should hail.

Any TikTok user is familiar with at least a few lines from the show, but the show exceeds even its most quotable moments. It reimagines the six ex-wives of Henry VIII as a pop girl group performing a concert. Set up as a competition to determine which wife had it worst, each queen performs their own solo number enumerating the adversities that they had to face during their marriage, reframed with modern references and pop influences. Pop divas of the 2000s influence each song including Beyoncé, Lilly Allen, Adele, and Emeli Sandé. For these six solos—where the queens serve as each other’s background singers and dancers—a standout cast is imperative and, in this tour, fulfilled. Despite the “competitive” set-up, the queens operate with cohesion and chemistry, exchanging quippy digs and constructing glorious harmonies.

The queens kick off the show with the powerful and exuberant “Ex-Wives,” sending chills throughout the audience with their first chorus. The intricate choreography incorporates technical jazz, house, hip-hop, and commercial dance—all of which must be performed while singing, requiring exceptional talent. Each queen glided effortlessly through this Herculean task, bringing endless energy throughout the performance.

Gilded with a gold crown and rhinestoned fishnets, Khalia Wilcoxon brought her own attitude and energy to Catherine of Aragon. Deploying her powerful voice and dynamic facial expressions, Wilcoxon delivered her solo, “No Way,” with a smirking vengefulness and a curled upper lip that won’t soon be  forgotten.

As Anne Boleyn, Storm Lever utilizes a light tone and an unimposing stature to create a pseudo-innocent, robotic, baby-doll façade. She delivers “Don’t Lose Ur Head” with an unapologetic air that bestows the pop-punk song with a twinge of impishness that marks the solo as her own.

Coming off the high energy of the first three numbers, Jasmine Forsberg had to rise to the first (and only) ballad of the show as Jane Seymour. With her resonant mezzo-soprano voice, she lends power to the heart-wrenching “Heart of Stone.” Forsberg’s intense emotions were felt throughout, culminating in intricate and high-flying rifts that amazed.

Portraying Anna of Cleves, Olivia Donalson’s deep alto imparts ferocity to the braggadocious, hip-hop number “Get Down.” Prancing across the stage with an impetuous air, Donalson’s bright smile brought whimsy to the boastful beat.

Didi Romero bodied the acting challenge that accompanies the vocal trial of Katherine Howard’s “All You Wanna Do.” Beginning the song by naively warbling the 20-year age difference of her first sexual encounter (she was 13), Romero pushes the sexy and youthful, bubble-gum pop number into the emotional reality of the life-long trauma. With heartfelt authenticity, Romero draws you in with her voice.

As Catherine Parr, Gabriella Carrillo brought a maternal wisdom to the group of bickering queens, building the emotional arc of “I Don’t Need Your Love” from a songbird’s melody to a truly formidable climax.

The queens’ astounding performances are matched by their visual elements. Emma Bailey’s set design creates a concert-like feel, encircling the queens with risers and lights. Tim Deiling’s lighting designs blend a concert atmosphere with traditional musical theater spotlights, creating a signature look for the show. Gabriella Slade modernized period costume designs to match modern influences, bedazzling and spangling each queen with signature ensembles that all worked as one.

“SIX” makes its DC debut with flying colors. The entire company brought magic, energy, modernity, and fun to the stage with a cast of queens that we all should hail.

“SIX The Musical” runs through September 4, 2022 at The National Theatre, 1321 Pennsylvania Avenue NW, Washington, DC 20004. For more information and tickets, click here. Note: Masks are required for all guests, regardless of vaccination status and/or age. Masks must be worn at all times while inside The National Theatre.