Theatre Review: ‘Something Rotten!’ at the Newtowne Players 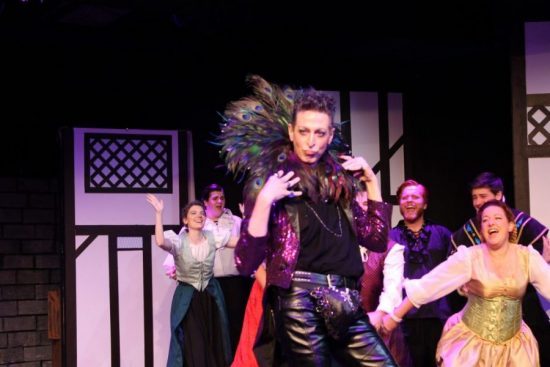 Shawn A. Davidson as Shakespeare (center) and the ensemble. Photo by Heather LePore.

One of my favorite types of musicals are those that are an ardent love letter to the fans themselves. They celebrate the dedication of musical theatre lovers by throwing in as many references as possible that avid fans will recognize, but with enough universal humor for everyone to enjoy. The Newtowne Players (NTP) production of “Something Rotten” taps into this carefree, anything-goes style of musical with an unbridled ebullience that leaves the audience in tears of joy.

Davidson has a David Bowie-meets-Keith Richards energy to his Shakespeare that leans into the rock god reimagining of The Bard… a character that is both larger than life and cattier than a high school mean girl.

“Something Rotten” was written by Karey and Wayne Kirkpatrick, with a book by John O’Farrell and Karey Kirkpatrick. It was originally produced on Broadway in 2015 and nominated for ten Tony Awards, including Best Musical and won for Best Featured Actor in a Musical. It tells the fictional story of William Shakespeare’s old classmate, Nick Bottom (honestly played by James Haigler), who has always harbored an absurd level of resentment for The Bard. Nick is determined to outdo his former classmate by any means possible, eventually seeking out the assistance of a rather questionable soothsayer’s advice for what the next “big thing” in theater will be. The result is an hysterical musical full of bawdy humor that makes it difficult not to laugh out loud.

Zach Ball’s set design is beautiful in its simplicity and gives the show an effortless fluidity. It is comprised of rotating pillars on the sides of the stage that subtly convey scene changes from a house to the town square to the shadier part of town and so on. Through simple changes of posters hanging on the pillars, the stage transforms to fit each setting. Ball also chose to employ the use of curtains to hide the set from the audience before the show begins and during intermission. This allows for both a level of grandeur and immersion into this imagined Renaissance world when the curtain is pulled back by the Minstrel (exuberantly played by Aliyah English) each time.

Costume design by Kayla Martin is the real MVP of this production’s creative side. Martin expertly creates an Renaissance-fair-chic vibe with her design choices. Her excellent use of color coordination, spot on corset usage for certain characters, and the costuming of Shakespeare was pure whimsy. Martin ups the ante each time Shakespeare appears with an over-the-top costume that brought a great sense of anticipation. My favorite costume was the peacock collar in Shakespeare’s debut scene.

The entire ensemble was cohesive and energetic. In musicals of this scope, the ensemble is as much a part of the backdrop as the set and integral to the success of a production. Three ensemble members that stood out were Sarah Jones, Peter Ulmann, and Patrick Lynch. Jones exuded a sensual confidence and physical precision through her dancing. Ulmann had a wacky exuberance that added so much energy to every scene in which he appeared. Lynch’s spot on reactions and one-liners during the ensemble sequences had me dying of laughter.

The whole cast was also remarkable but there were three notable performances. Angela Garcia-Clark as Bea deserves an award for her incredible vocal power during the number “Right Hand Man” in Act One. She infuses Bea with a boss-lady energy that felt empowering and a timely reminder of how truly powerful and self-sufficient women are. Julian Reidenauer as Nigel Bottom brings a naïve hilarity of epic proportions that brought the house down with laughter numerous times. His comedic timing is commendable. Richard Lehman as Thomas Nostradramus steals every scene he is in with a manic energy that practically leaps off of the stage. Shawn A. Davidson has a David Bowie-meets-Keith Richards energy to his Shakespeare that leans into the rock god reimagining of The Bard. The dedication to his acting choices are thorough, with precise physicality that helps bring a daringly fresh interpretation to the role—a character that is both larger than life and cattier than a high school mean girl.

Direction by Stacy Reynolds Oosterink and Megan Rankin Herring, with musical direction by Kylie Treston, turns this production into a merry romp. Oosterink and Herring keep the action clipping by at a pace that never lags and always keeps the audience engrossed. Their blocking feels beautifully choreographed. In Act 2, Nick Bottom’s newest production had so many moving pieces that my senses were overwhelmed with its complexity. Treston’s musical direction brings a full-bodied feel to the score that is masterfully performed by a ten-piece orchestra.

“Something Rotten” is the musical that everyone needs but doesn’t know that they need until they see it. It’s filled with an insane amount of jokes, one-liners, physical comedy, and upbeat musical earworms that lift the spirit. NTP brings this show to Southern Maryland at a time when we all need an excuse to laugh and forget about the troubles of the real world, even if its only for a few hours. Who knew William Shakespeare was actually the true OG rock god of literature? At least, according to “Something Rotten,” that is.

Advisory: This show contains mature language and sexual innuendo throughout.

“Something Rotten” runs through July 24th, 2022 at the Three Notch Theater at 21744 South Coral Drive Lexington Park, MD 20653. For more information and to purchase tickets, please visit their website here.