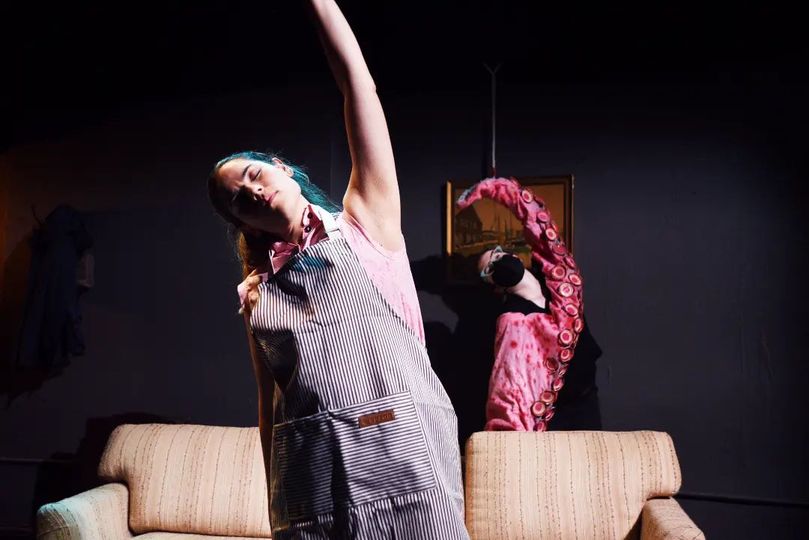 Can one go home again? Is it possible to restore what’s lost in a confining, manipulative existence? Can we celebrate our own ‘otherness,’ even as we are persecuted for it? Baltimore playwright Chad Short tackles these questions in “Squidsbury,” a play he calls “a testament to gritty, adaptable, hardworking matriarchs.” Produced and directed by Tessara Morgan for Truepenny Projects, the show appears at Baltimore’s Mercury Theater through the end of July.

There’s marvelous, inspiring work in this play by both the cast and the production team.

Tina is a young woman with a secret. It weighs heavily on her. In conversation with her best friend, Teensy, she reveals a startling truth: Tina is a squid. “Squid,” here, is neither an acronym, nor something to be Googled from the Urban Dictionary. Tina is, in fact, an actual seagoing cephalopod who’s confined by the disguise of a “human suit.” From time to time, one or more of her tentacles peeks its way out from under a table or behind a sofa. Mostly Tina does a good job of keeping it all together. She’d better, because boyfriend Tim exerts strict control over her, and doesn’t allow her to remove the suit at any time. No one can know!

Tina’s masquerade is maintained, even as friends Tammy and Todd come to visit. They have news of their own, consisting of an exciting invitation for the foursome to travel together. Tina is thrilled, while Tim is busy nursing an extremely upset stomach. Negotiations after the party result in a fierce quarrel. Tina seeks help from Teensy, and the two hatch a plot. “You’re pure evil,” Tina tells Teensy. “You’re the devil,” Teensy replies, “I’m just your advocate.” Eventually, Tina must make a life-changing choice.

Short’s wackadoodle plot is served up by producer/director Tessara Morgan as intense as it is poignant and real. Morgan’s ensemble, aside from Tina and the humans, features puppeteers and a pair of “Ticket Takers” who form the connective tissue between scenes. O’Malley Steuerman and Caitlin Weaver play these characters, clad in black, and ensnared by what appear to be plastic, six-pack rings. In-scene, the pair perform as TV news reporters and other crucial entities—often above the action (literally)—and humming a sea shanty as they go.

Tammy (J Purnell Hargrove) and Todd (Bobby Henneberg) are positively electric. These characters are the living answer to the question “what if we took an old sit-com’s zany neighbor couple, and force-fed them three cases of Jolt Cola apiece?” Shana Herndon plays Teensy very much by the book, as the formulaic sassy BFF. Ultimately, Teensy does display some depth, and it rings so, so true. Dorian Elie plays the controlling boyfriend, Tim. Elie makes him both pathetically weak and irredeemably toxic at the same time—a really nice feat. Maria Ortiz-Marquez, as Tina, takes the audience on a tortuous journey. Her character changes through the play, and Ortiz-Marquez delivers a subtle intensity in the early scenes that is so natural, it’s only in hindsight that it comes as a surprise. Tina is the eye of the storm in those moments, but when her stakes are raised, she digs deep and finds the strength to grab hold of her agency with both (and then some) hands. There’s beautiful movement work done by Isaiah Mason Harvey and Jess Rassp, the puppeteers who form Tina’s tentacles. Their choreography is hypnotic, and, dare one say, fluid. David Brasington also checks in, controlling a large and elaborate squid puppet.

There’s marvelous, inspiring work in this play by both the cast and the production team. Morgan, the producer/director, also designed the puppets. They are fanciful, and gorgeous. Amelia Karolcik’s incredible costume and makeup work are a highlight of the show, displaying rich imagination on a shoestring budget. Sound is by the playwright. Luke Farley’s scenery consists of a basic interior—until it doesn’t—and, similarly, lighting by Eric Nightengale saves its best for last. There’s obvious and appreciated care in the work of intimacy consultant Behar Baharloo and fight choreographer Gerrad Taylor. Stage manager Jordan Cahoon somehow manages to execute complex cues in what must be the warmest booth in town.

Truepenny Projects is a collective originally from Wisconsin, helmed by co-artistic directors Morgan and Farley. They have a season scheduled which consists of a shadow puppet piece, and two gallery exhibitions. If “Squidsbury” is a fair indication of the group’s ambition and reach, one hopes that they devote further time and effort into making theater. It is worth noting here, that the Mercury is a smaller venue, and that seating for this production is limited to fewer than 30 seats. Advance purchase of tickets is urged.

Running Time: One hour and 50 minutes with one intermission.

“Squidsbury” runs through July 31, 2022 at the Mercury Theater, 1823 N. Charles Street, Baltimore, MD 21201. Tickets are available for purchase online. Patrons must provide proof of vaccination and are required to remain masked.