Theatre Review: ‘The Amazing Adventures of Dr. Wonderful (and Her Dog!)’ at The Keegan Theatre 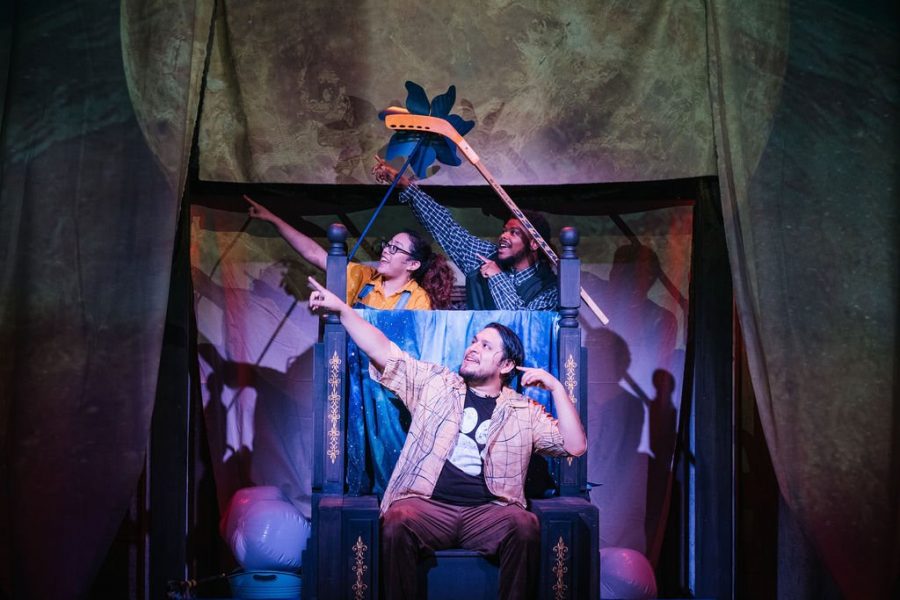 Ruth Elizabeth Diaz, Christopher Rios, and Delante Dates in “The Amazing Adventures of Dr. Wonderful (and Her Dog!)” at the Keegan Theatre. Photo by Cameron Whitman Photography.

In addition to being a prolific playwright, Lauren Gunderson is also one of the nation’s best ambassadors for science. Works like “Emilie: La Marquise Du Châtelet Defends Her Life Tonight,” “Ada and the Memory Engine,” and “Silent Sky” dramatized the lives of women who persevered in the pursuit of science against harsh pushback from the male-dominated establishment. With such plays—among the most widely produced in the U.S. in recent years—Gunderson has inspired many young women in STEM pursuits.

…the sort of staged show we need more of—a mix of education and entertainment that the young people…found fully satisfying.

With 2011’s “The Amazing Adventures of Dr. Wonderful (and Her Dog!)” Gunderson reached out to an even younger audience, sharing her love of science with children ages four through eight. The briskly-paced, bright, and cheerful musical captures that divine and fleeting moment in early childhood when the lines between reality and fantasy are blurred, and where a girl, her dog, and the boy from down the street can travel through the solar system without leaving her bedroom.

The play makes its regional debut at The Keegan Theatre in a production directed by Elena Velasco. It is part of Keegan’s PLAY-RAH-KA series for families (a name drawn from the Irish “pléaráca,” meaning a joyful romp). Its spirit is drawn from classics like “The Magic School Bus” and other PBS favorites, with fast-moving action interspersed with Bree Lowdermilk’s toe-tapping songs (the six-year-old in front of me got up to dance several times) and puzzles calling for audience participation.

Ruth Elizabeth Diaz, a veteran of Washington-area children’s theatre and other movement-heavy performing, shines as Dr. Wonderful, creating an effervescent character who never condescends to the young audience. Christopher Rios is great fun as dog Newton—rarely down on all fours and usually interacting like he’s another kid. Delante Dates has a bit less to do as Ben, Dr. Wonderful’s friend who reluctantly comes along for the ride. Gunderson mainly has him react to the others, but his ongoing tiffs with Newton are a highlight. Carianmax Benitez is also strong as Dr. Wonderful’s mom (who Ben refers to as “Ms. Dr. Wonderful”). She has a great moment as a mystery woman who evokes Carmen Sandiego.

Mom sends Dr. Wonderful and company off to solve a mystery involving the possible disappearance of the sun, which takes the team to every planet of the solar system. If there’s a flaw in Gunderson’s text, it’s that she may have tried to cram too much information into too little time. Facts about each planet zoom by and a quick lesson on solar fusion may have puzzled the intended audience.

The set by Cindy Landrum Jacobs effectively evokes a curious child’s bedroom, though the use of sheets to catch Zavier Augustus Lee Taylor’s colorful projections sometimes effects the clarity of the images. Sound design by Cresent Haynes helps make Dr. Wonderful’s imagined world present, though the use of body mics—though probably needed for this type of production—can overwhelm in the small space.

The Washington area is rich in quality children’s theatre with companies like Adventure Theatre, Imagination Stage, and others offering exceptional fare. Keegan’s PLAY-RAH-KA fits right in with that company. “The Amazing Adventures of Dr. Wonderful (and Her Dog!)” is the sort of staged show we need more of—a mix of education and entertainment that the young people who surrounded me during a weekend matinee found fully satisfying.

“The Amazing Adventures of Dr. Wonderful (and Her Dog!)” runs through July 24, 2022 at the Keegan Theatre, 1742 Church Street NW, Washington 20036. For tickets and information, click here. NOTE: All patrons must wear masks and show proof of vaccination in order to attend a performance.