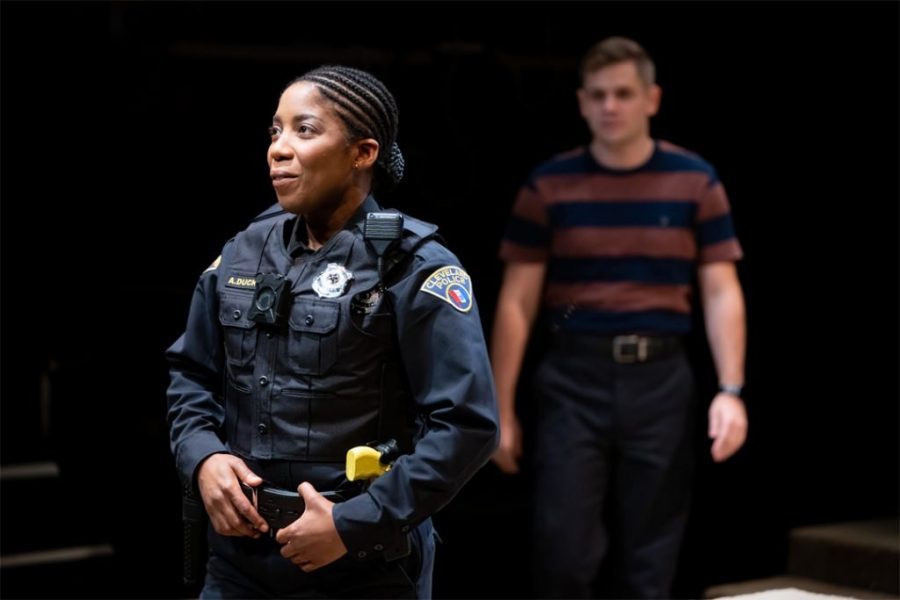 The Contemporary American Theater Festival (CATF) is once again serving up a menu of new plays by writers with a lot on their minds: climate change, race, police violence, reproductive rights, gentrification, cyber terror, and more. This six-play season was originally chosen by founder Ed Herendeen for the 2020 season. That was before COVID-19 changed everyone’s plans and Herendeen retired. But in 2022, CATF is back with six plays sure to make you think, feel, and reflect upon where we are and where we are heading in mid-2022.

While the plays are in different stages of development, they are always stimulating, challenging, and moving…CATF is a gem. 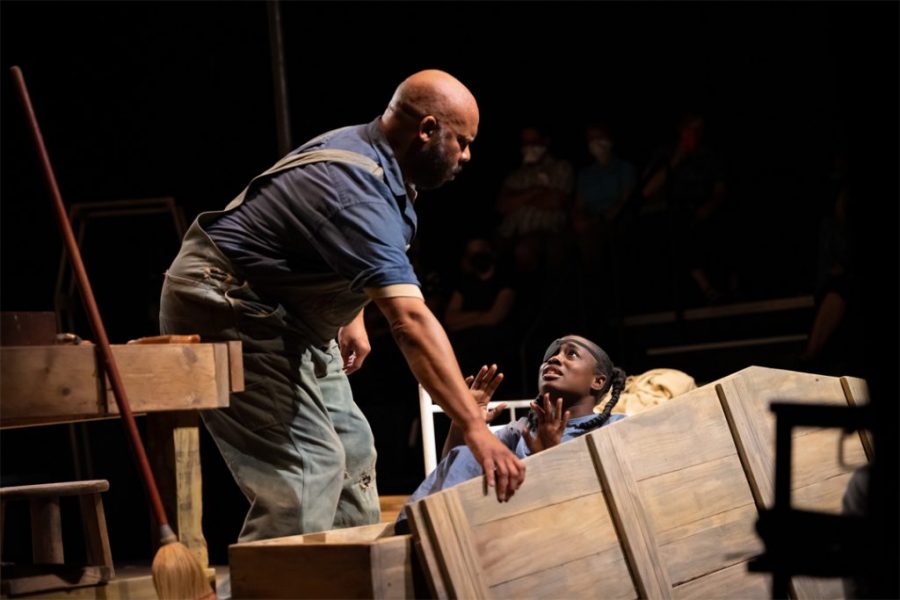 Jefferson A. Russell and Lenique Vincent in “The House of the Negro Insane” by Terence Anthony. CATF 2022. Photo by Seth Freeman.

CATF is known for embracing timely and sensitive plays. Several of the playwrights in this year’s lineup highlight systemic racism as a theme illustrating how people of color continue to face inequity, injustice, and the blatant imbalance of power. Terence Anthony‘s “The House of the Negro Insane” is set in 1935 at the Taft State Hospital in Oklahoma, one of seven psychiatric facilities in the U.S. that were built to care for “insane and idiotic negroes.” Heinous experiments were carried out on residents, and coffins were hand-build at an onsite woodshop, managed by Henry, an erratic and sometimes violent alcoholic. The play follows the complex relationship that Attius—an inmate who has managed to get a “job” at the workshop where these coffins are made—and Henry have developed over the years. When several inmates manage to sneak away to hide in the shop, Attius is faced with a harrowing decision.

Kevin Artigue’s “Sheepdog” is one of the most developed scripts in the festival with precisely sketched characters who remain empathetic, even when exposing the darker sides of their personalities. Two officers on the Cleveland police force, Amina, who is Black, and Ryan who is White, fall in love with each other (the powerful Sarah Ellen Stephens and well-cast Doug Harris). The plot is all too familiar when Ryan fatally shoots a Black man during a routine traffic stop and the clash of fact and fiction leads to an unrepairable fissure in the couple’s once solid relationship. This play has the momentum of a bullet train while also allowing the audience the time and space to connect with the characters emotionally and empathize with their moral dilemma. 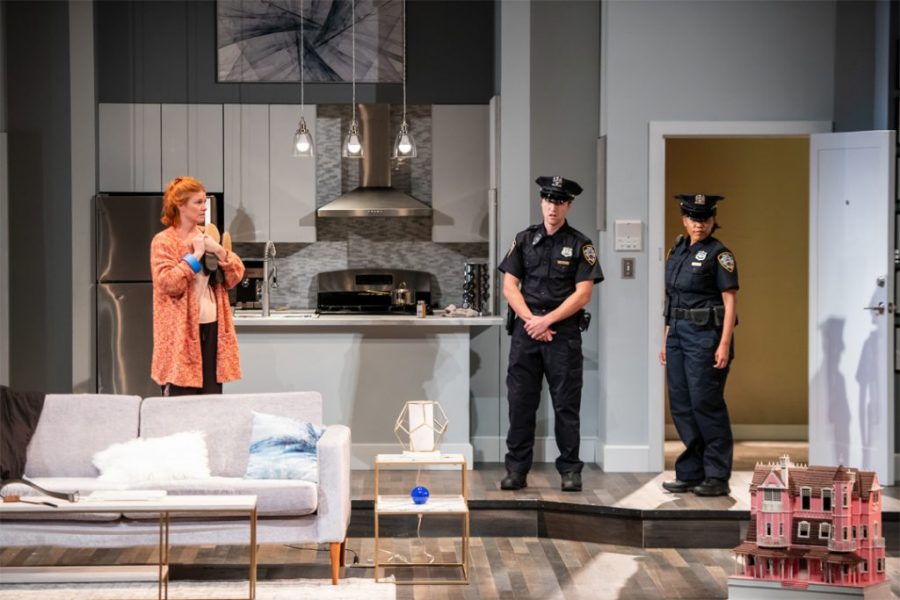 At the center of Chisa Hutchinson’s “Whitelisted” sits Rebecca Burgess (an animated Kate MacCluggage), a fancy doll-house designer and likely trust fund baby who lives in a chic, newly renovated owner’s unit of a brownstone in Bed Stuy, Brooklyn. Everything and everyone around seem to annoy her as she chats on the phone and sashays around her perfect little house and her perfect little world. Children and Black women in particular drive her batty. When things start to go awry—doll house furniture mysteriously moving upside down, creepy shadows, and the appearance and disappearance of a dead body in her shower—Rebecca tries to get help from the police, but it’s the ninth time she’s called them, and they’re over it. She engages a private detective (played with polished nuance by Carlo Alban) but the spooking continues. Eventually, she is transported to another time and receives a dose of reality that finally cracks her veneer and allows her to see outside of her own ego-driven existence to empathize with others. 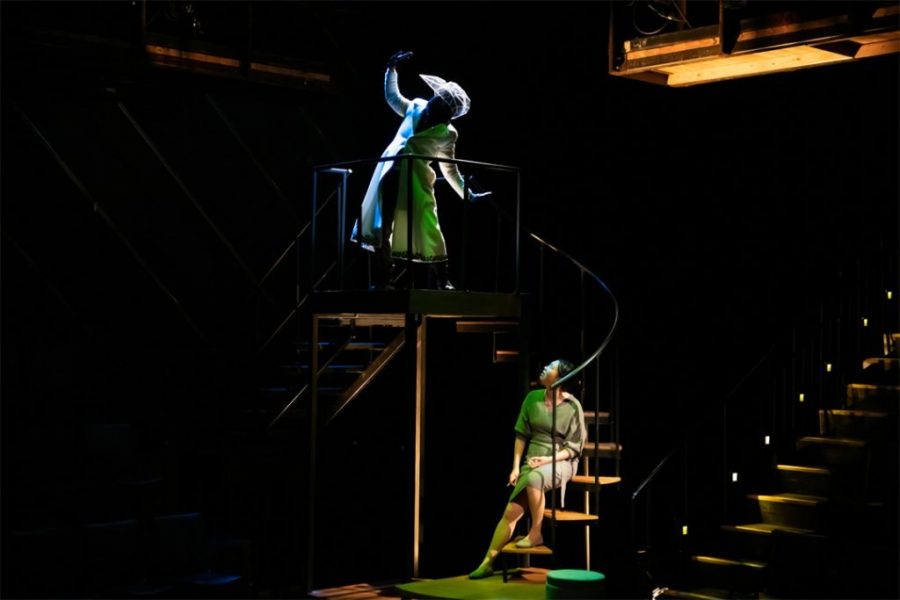 Carlo Alban and Karen Li in the world premiere of “Babel” by Jacqueline Goldfinger. CATF 2022. Photo by Seth Freeman.

Jacqueline Goldfinger’s “Babel” is set in a futuristic world in which births are strictly controlled by the government due to over population with water shortages and all that comes with limited resources. “They want to make sure that every baby born is the best it can be,” says Dani, whose partner is pregnant with a baby whose pre-certificate wasn’t signed by their doctor. Certified babies can go on with life as normal, but ones who fail are given two options: abortion or life in a penal colony. This dark comedy presents two couples who face off on the issues that have become even more relevant since the play was penned. 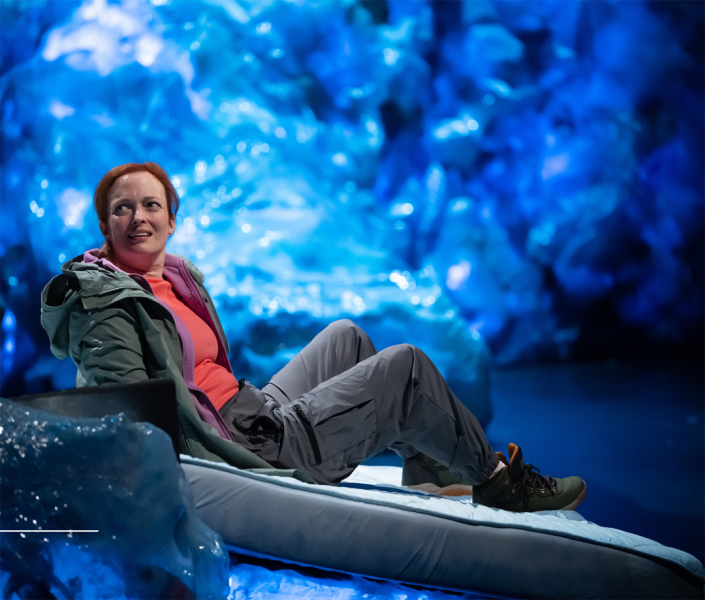 Rounding out the festival are “Ushuaia Blue” and “The Fifth Domain.” Caridad Svich’s “Ushuaia Blue” tackles global warming in Antarctica as two researchers find their marital relationship cooling. While Victor Lesniewski’s “Fifth Domain” promises a fast-paced, cyber-security mystery drama, it never quite rises to the level of tension required for this genre. 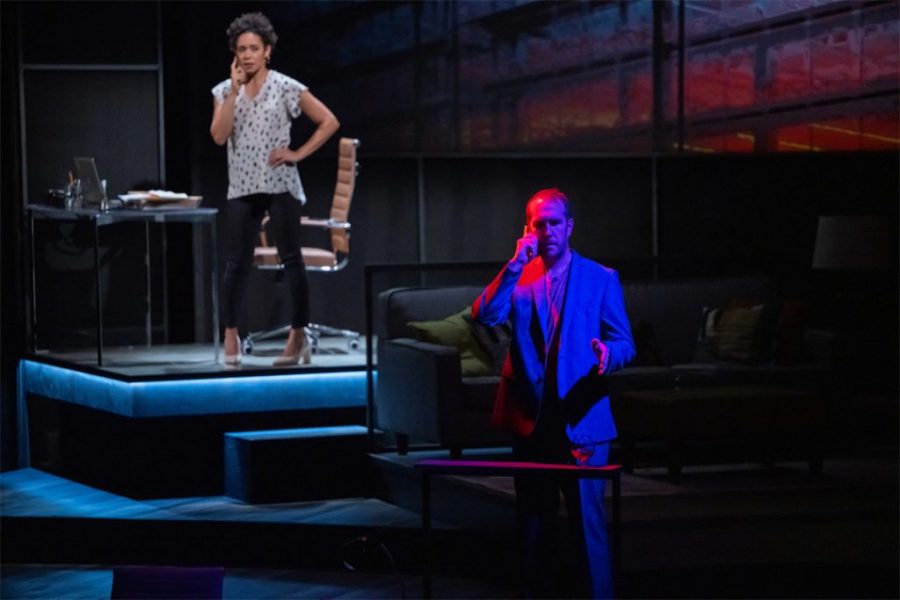 The Contemporary American Theater Festival once again delivers plays that make you think and make you want to talk about the stories, characters, and issues they present. While the plays are in different stages of development, they are always stimulating, challenging, and moving. While CATF audiences will miss Ed Herendeen and his particular voice and curation, Peggy McGowen is no stranger to CATF as its new Producing Artistic Director. I heard more than one audience member comment that they are enthusiastic about how her seasons will come together in future years.

CATF is a gem and all those who value the benefits of a steadfast new play incubator in the Mid-Atlantic would do well to encourage its growth and success by spreading the word, purchasing a REP PASS (four, five and six plays with discounts), or becoming a sponsor/donor.

Covid-19 Safety: Masks must be properly worn (covering the nose and mouth) while inside any building for all CATF performances and events. All CATF patrons are requested to be fully vaccinated against COVID-19 in order to attend any in-person CATF event. For more information, click here.

Beth Hauptle has held lead marketing and communications positions at Arena Stage, Shakespeare Theatre Company, Studio Theatre, and Baltimore Center Stage. This is her third time reviewing CATF for MD Theatre Guide. She currently works for the Rural Advancement Foundation International - USA (RAFI-USA), in a communications role, advocating for farmers of small to mid-sized operations with a focus on farmers of color in the Southeast U.S.