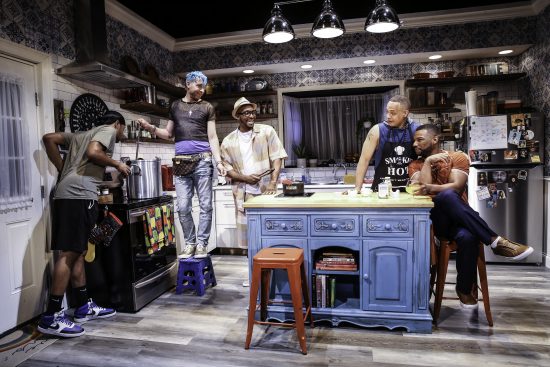 It’s time for the annual Memphis Hot Wings Festival, and this year a team of queer Black men—“New Wing Order”—is going to win it all. But as friends and family reunite to prep hundreds of chicken wings the night before the competition, tensions are simmering. 2021 Pulitzer Prize-winner, “The Hot Wing King” by Katori Hall, explores masculinity, black fatherhood, and queer love with a premise any wing-lover will appreciate. Presented by Studio Theatre, “The Hot Wing King” takes a while to find its rhythm, but is ultimately heartfelt and timely.

The leader of the New Wing Order, Cordell (Brian Marable) is the architect behind this year’s culinary vision—creamy Creole Alfredo wings with bourbon-infused bacon. He’s only been in Memphis for a couple months since he left his wife and moved in with his boyfriend Dwayne (Blake Morris), a hotel manager. Also on the team are Big Charles (Bjorn DuPaty), a barber more interested in watching the basketball game scores than prepping chicken, and Isom (Michael Kevin Darnall), the boisterous, blue-haired, and drama-stirring novice of the New World Order.

Unexpected guests and family drama disrupt the preparations, when TJ (JaBen Early) drops by with some cash of dubiously legal origins for his teen son and Dwayne’s nephew, EJ (Derrick Sanders III). Soon after his father departs, EJ turns up with two garbage bags of belongings, asking to stay the night. Cordell questions the wisdom of letting EJ stay, after money mysteriously disappeared from Dwayne’s wallet the last time they hosted him. But Dwayne sets the teen up in the guest bedroom, stung by guilt over his role in the death of EJ’s mother.

An intricate set, designed by Michael Carnahan, divides the stage into four key spaces in Dwayne’s house—the kitchen, guest bedroom, backyard, and living room. Rainbow accents on doormat or dishtowels establish this as a queer household from the start. The kitchen, a stylish and hyper-realistic setting for the bulk of the action, features a functioning refrigerator, sink, and induction stovetop along with a tile backsplash and blue antique central island. It conveys the relative wealth of Dwayne compared to Cordell, who struggles to find a job in Memphis after losing everything in his divorce—or EJ, who bounces around his basketball teammates’ couches when TJ fails to provide a stable home.

Lighting by Alan C. Edwards helps segment the set, focusing attention on the room where key action is occurring while fusing stage lighting with household light fixtures. Curtis Craig’s sound design provides hip-hop instrumentals for scene transitions and fills out the hyperrealistic set with the faint noise of a tv, a car starting outside, or a boom box playing a favorite song. Supporting the colorful characters, Ivania Stack clearly had fun with costume design, especially Isom’s looks, including the mesh crop top and knock-off Gucci fanny pack when we first meet him, and the hilariously ugly competition shirts New Wing Order dons.

The script balances tone well, bringing the energy back from somber moments with scenes of levity. For example, an intense conversation between Dwayne and EJ about his mother’s death two years prior is immediately followed by a silly sign-a-long dance scene. However, the pacing is less crisp, slowly meandering for much of the first act and then wrapping up the ending too neatly and quickly to fully satisfy. Playwright Katori Hall writes with a casual voice that honestly reflects the lighthearted banter of friends and lovers, although I struggled from time to time to understand, particularly Isom’s slang-filled and NOLA-accented dialogue. More serious lines sometimes felt out-of-character, such as when Cordell comments that having a son is like having your heart walk around outside your chest—a paraphrase of a frequently-repeated, parenting cliché. Cordell doesn’t seem like the kind of man to scroll Momspiration Instagram.

Once it finds its stride, “The Hot Wing King” is a sweet, spicy, and satisfying romp, a bit like the blueberry, blue cheese wing the New Wing Order almost won with the past year. Although it broaches difficult conversations around police violence, being a parent, and loving one another, this play still delivers plenty of laughs under Steve H. Broadnax III’s direction. Grounded in a specific Southern culture, “The Hot Wing King” won’t resonate equally with all audiences but even if some references fly overhead, the tension and humor of the script performed by an excellent cast of Black men on a carefully detailed set adds up to a worthwhile night of theatre.

Running time: Two hours and 10 minutes with one 15-minute intermission.