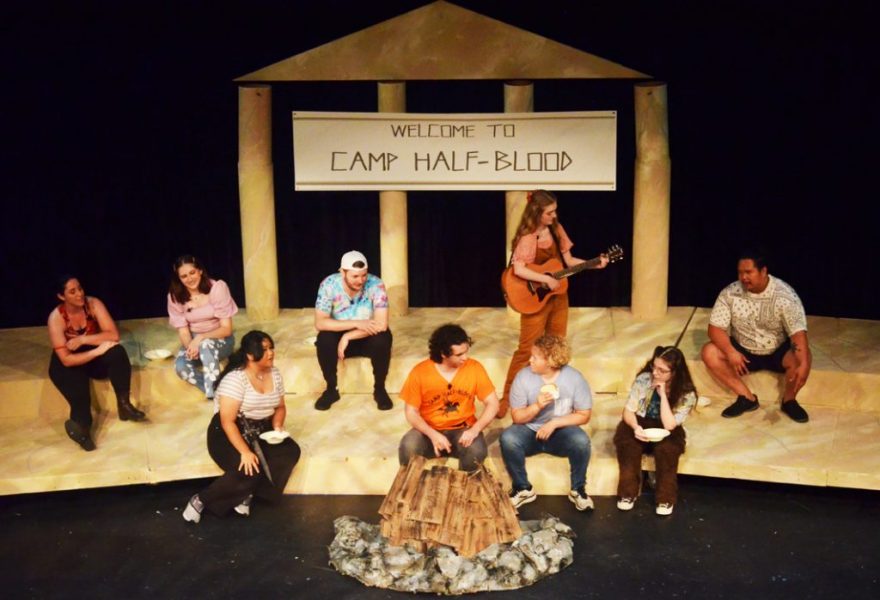 The cast of Wildwood Summer Theatre’s “The Lightning Thief.” Photo by Siena Maxwell.

The purpose of theater has been debated throughout history. Is it meant to be thought-provoking? Is it meant to entertain? Should its goal be to bring people together? There will never be a concrete answer to this debate. However, within minutes of walking into Wildwood Summer Theater’s (WST) production of “The Lightning Thief,” you know what their answer to this debate is: community.

…a fantastic production and hilarious retelling of Rick Riordan’s book, run and produced by the DMV’s talented youth.

“The Lightning Thief: The Percy Jackson Musical” is a fast-paced musical based on the teen and young adult book series, Percy Jackson and the Lightning Thief, by Rick Riordan. The popularization of the book gave mainstream attention to ADHD and Dyslexia. In fact, Riordan’s story reframes these two learning disabilities commonly seen as a hindrance and shows them as a strength. What stood out to me in WST’s program was Dramaturg Ileana Blustein’s inclusion of information about ADHD and Dyslexia. Several pages were dedicated to the definitions of each disability and differences in ADHD symptoms for male and female-identifying people. Blustein goes above and beyond for the audiences of “The Lightning Thief” and even includes some helpful background information on Greek mythology. The cast and crew clearly spent a through amount of time considering the impact this series has made and how they wish their performance to influence their audiences. Adaptations are being made all the time, but what distinguishes this production from the rest is the joy and commitment from the cast and crew. Percy Jackson has touched the hearts of young adults who grew up with it, and now that love can be passed on to the next generation.

I attended the understudy performance for this production, but would never have guessed it from the dedication and professionalism shown by the cast. Bash House embraced the rock-inspired vocals as he portrayed Percy. At his side were Maddie Sebastian and Hannah Biedron who played Annabeth and Grover respectively. Sebastian’s melodic and powerful soprano and Biedron’s impeccable comedic timing kept the audience captivated as the trio embarked on a hero’s quest to save the world.

The outstanding performances did not stop with the leading trio. The ensemble of “The Lightning Thief” blew me away. Every member of this production should be proud of all their hard work. That said, there are a few honorable mentions. Scott Armiger as a sassy deadbeat Mr. D instantly became an audience favorite, especially once he began ironically tap dancing while singing about wanting to kill his campers. Sam Intrater’s physical comedy was shown in his portrayal of Chiron. No one could resist a chuckle as he galloped on and off the stage. I can’t forget Pelzman-Kern’s disarmingly charming characterization of Luke Castellan. Carolina Tomasi dazzled with her fiery attitude and clear voice as Clarisse La Rue and transitioned seamlessly into her numerous other characters. I expect to see many of these faces again in future productions.

The hard work of the actors brought the characters to life, but the dedication of the production team was what allowed the magic to envelope the stage. The show constantly shifts in location and meets a variety of characters as the main characters attempt a cross country road trip to clear Percy’s name and discover who wants to start a war between the gods. WST did an amazing job with the quick and efficient costume/set changes that were needed to reflect these many characters and locations.

Delaney Gregg needed to be precise with each costume. Many members of the cast played multiple roles. Gregg helped the audience distinguish each of the demi-gods by dressing them in clothing that indicated their godly parents. Alyssa Taylor as Maddie Rocha exuded feminine energy in a sweet pink top with puffy sleeves and blue jeans with flower decals as the daughter of Aphrodite. Clarisse (Tomasi) wore dramatic winged eyeliner, black pants and combat boots, and a blood red camo tank. A strong and fierce child of Ares. Katie Gardner, who was played by Gregg herself, dressed as a gardener. The child of Demeter wore brown overalls and a cheery floral top. Finally, Grover (Biedron) wore a simple T-shirt paired with brown fur pants to indicate his true identity as a Satyr. If the heat bothered Biedron, they didn’t let on.

Instead of attempting to undergo intricate set changes to keep up with the story, scenic designer Mairead Canning cleverly designed signs to dictate each new setting. Lighting designer Erin Sanders used a lot of textured, saturated lighting to assist in establishing the setting and the tone for the many characters we meet. This production employed the use of masks and puppetry to create the mythical monsters in the story. The Fury’s large black wings were operated by other cast members, which allowed for seamless transitions. The Minotaur towered over Percy as three cast members operated its large papier-mâché head and detachable arms.

Overall, it was a fantastic production and hilarious retelling of Rick Riordan’s book, run and produced by the DMV’s talented youth. Join Wildwood Summer Theater for professional productions and a rooted sense of community. Wildwood Summer Theater is a theatrical company completely composed of young adults. Every artistic mind behind the production and on stage is between the ages of 14-25. WST started in 1965, making it the oldest, entirely youth-run theater in the DC metro area. This production was directed by Mercedes Blankenship and produced by Katie Peacock, with music direction by Ginny Moses, choreography by Katie Quinn, and fight choreography by Kiefer Cure.