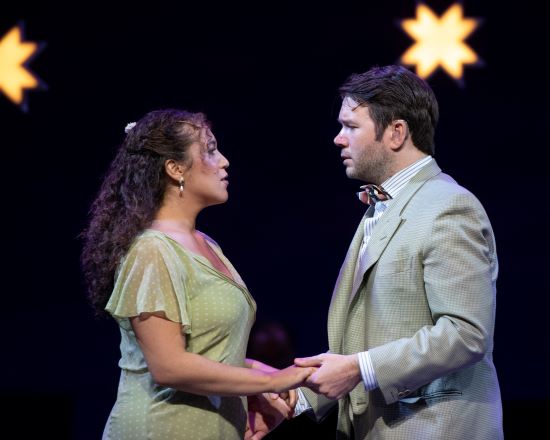 “The Music Man” is considered by many to be the epitome of Americana in musical theatre. With lyrics, music, and book by Meredith Willson and story by Willson and Franklin Lacey, Olney’s current iteration is co-directed by Michael Baron and Sandra Mae Frank.

This production had many bumps in the road to its opening. The idea was first conceived by James Caverly, who plays the lead role of Harold Hill, and Jason Loewith, Artistic Director of Olney Theatre Center. Caverly, who is himself deaf, had seen a musical on Broadway that used hearing and deaf actors and suggested “The Music Man” in 2017.  It took some time to work out the logistics and then there was the pandemic. Recently, Covid again impacted the original opening date. The show was finally able to begin its run on June 29, 2022. Even then, several of the cast members still wore masks.

…a thunderous success. Don’t miss this most amazing production. It’s a summertime must and perfect for all ages.

At first, I was not sure how I would enjoy a musical where many in the cast would not be speaking but using American Sign Language (ASL). Then I recalled seeing a Broadway production of the Theater of the Deaf in the 1970s. It took only a few minutes to sit back and enjoy every moment of this production. It was like watching a great, foreign language film. After awhile, you don’t care that you have to read the subtitles and you become absorbed in the story.

There are times when ASL is used even when one of the actors is not Deaf. Because the supertitles are projected well over the performers’ heads, I had to make a choice of following the dialogue or watching the performances. I wish they had been able to have the words closer to the performers to be able to do both. However, that may be how those who are dependent on sign language interpreters may feel when they go to a “normal” show. They can watch the interpreter, usually relegated to below the stage or to one side, or watch the performers.

The placement of the supertitles did not affect the overall enjoyment of the show at all due to the wonderful performances. Caverly is magnificent as Harold Hill. Hill is a con man who fools the small, Iowa town of River City into buying instruments and uniforms for a kid’s band to keep the children from the corrupting influences of playing pool. Caverly helps us visualize Hill’s ingenious ways of beguiling the townsfolk with the aid of his old buddy and former con artist, Marcellus (Vaidya). All of the wonderful Willson songs are still here and handled in a very inventive way— the two performers are meticulously interwoven not only as characters, but vocally because Vaidya is the singing voice for Caverly. He has a marvelous voice and with Caverly’s signing, it makes the music more meaningful. They were exceptionally integrated in the number “You Got Trouble.”

Hill’s scheme also involves winning over the local librarian and piano teacher, Marian Paroo, played by Adelina Mitchell. Of course, the two fall in love but their relationship has some surprises. Mitchell also has a wonderfully trained voice. Though not deaf, she also signs either with vocalizations or just by signing her lines. (She does sing her songs.) Mitchell and Caverly have great chemistry, and when they sing “Till There Was You”—one with words and one in ASL— it was a great theatrical moment.

The supporting cast all give performances that help electrify the production. Nicki Runge plays Mrs. Paroo, Marian’s mother, and Christopher Tester plays her brother, Winthrop. Both are Deaf actors and bring a genuineness to the characters.

Andrew Morrill has just the right stuffiness as Mayor George Shinn and Amelia Hensley is perfectly self-absorbed and righteous as his wife, Eulalie Mackenknie Shinn. The latter is hysterical as she runs her ladies’ dance group. Other standouts in the cast were Florrie Bagel as Ethel Toffelmier, Marcellus’ girl, and Jay Frisby as Charlie Cowell (later Jacey Squires).

There are three amazing younger performers in the show—Anjel Piñero as Zaneeta Shinn, Matthew August as Tommy Djilas, and Sophia Early as Amaryllis (Note: Early is the understudy for Sarah Anne Sillers). The first two are very young lovers who meet behind the backs of Zaneeta’s parents. Early’s rendition of the complicated tongue twister, “Pick-a-Little, Talk-a-Little” is perfection and her vocalization for Winthrop in “Gary, Indiana” is delightful. The rest of the dazzling ensemble includes Mervin Primeaux-O’Bryant, Gregor Lopes, Dylan Toms, and Heather Beck.

The fact that a production as ambitious as this works and runs so smoothly is due to the two directors Baron and Frank. Like the Caverly and Vaidya, their direction blends together to create many memorable moments. Karma Camp’s choreography not only helps the show keep moving but shows off the talents of the performers.

Christopher Youstra does an incredible job. He is not only the music director but is also one of the singers in the opening number as well as the barbershop quartet. There is an extra challenge as the singing and signing have to be perfectly synced, making sure that the timing is perfect. Everyone does a marvelous job. The on-stage orchestra enriches the musical numbers and manages to sound like a full, seventy-six-piece band. The musicians include Youstra on the piano; Pam Wilt on keyboard; Lee Lachman on piccolo, flute, clarinet, and soprano sax; Roger Garza on clarinet and bassoon; Joseph Herrera on trumpet; Joe Jackson on trombone; Andrea Vercoe on violin; Matt Trimboli on guitar/banjo; Max Murray on bass/tuba; and Mark Carson on percussion.

Ethan Sinnott’s scenic designs are very clever and Rosemary Pardee’s costumes designs are period and reflect each character. Matt Rowe’s sound design helps give the impression that every cast member is singing. Jesse W. Belsky’s lighting design illuminates the actors—particularly important when they are signing. Michelle Banks directed the ASL and Sean Preston was the projection designer.

“The Music Man” is a thunderous success. Don’t miss this most amazing production. It’s a summertime must and perfect for all ages.

Running Time: Two hours and 40 minutes with one intermission.

Note: Performed in ASL and English with English Supertitles.