Theatre Review: ‘The Pirates of Penzance’ at the Young Victorian Theatre Company 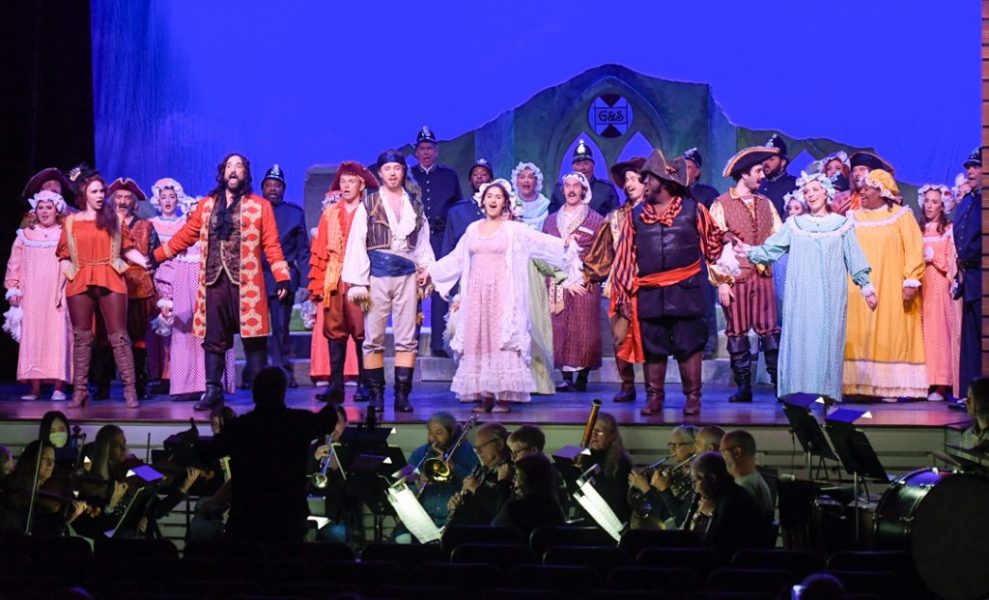 At long last, Young Victorian Theatre Company (YVTC) can celebrate it’s 50th Anniversary (though two years late due to the pandemic) and is back in its original home on the Gilman School campus. They do it in grand style with a production as delightful and professional as you will ever see—Gilbert & Sullivan’s wonderfully hilarious “The Pirates of Penzance.”

…a production as delightful and professional as you will ever see…

YVTC has become a Baltimore institution, bringing Gilbert & Sullivan’s work to the stage for decades. Brian S. Goodman—who joined at 18 in what began as a student group at Gilman, has been the general manager for 45 years—introduced the show with some fun facts. Gilbert & Sullivan were apparently the first British invasion and The Beatles of their time. When the show premiered in New York on December 31, 1879 (for copyright reasons), it was a huge success. As evidenced by the popular film in the 1980s starring Kevin Kline, Linda Ronstandt, and Rex Smith and probably too many productions to name, it has continued its appeal through the years.

The day has finally arrived—the 21st birthday of Frederic (an earnest Luke Schmidt) who will finally be freed from his indentured apprenticeship. His nurse Ruth (the wonderfully funny Cara Shaefer) misheard “pilot” and she gave the boy to a band of “pirates”—who are about as frightening as a basket of puppies. It turns out Frederic is a very dutiful and honorable young man, and tells The Pirate King (a fantastic Sam Mungo), his right hand man, Samuel (an excellent Daniel Sampson), and the rest of the gang that he must hunt them down and rid the word of pirates if they don’t reform.

Meanwhile, Ruth, the only female this young man has ever seen, wants Frederic to wed her. He reluctantly agrees until a bevy of maidens, all the daughters of Major General Stanley (more about the amazing Thomas Hochla later), arrive on the beach and he is instantly smitten with Mabel (Tess Ottinger, with a stunning voice) as she is with him. The pirates soon follow and want to make all the women their wives.

These pirates live by several ethical codes, the most important being that they will never harm an orphan because they are orphans. (There is some very funny word play there.) Since everyone knows this, they are not the most successful of pirates. When the Major-General arrives and after his incredible “I-am-the-model-of-a-modern-major-general” tongue-twister, he convinces the pirates he is an orphan. If they marry his daughters, he will be so alone.

As Frederic gathers the motley band of policemen, led by the Sergeant of Police (Jim Williams in fine voice), The Pirate King and Ruth find a paradox and convince Frederic that because he was born in a leap year on February 29, he is only five. Meanwhile, the Major-General is struck with sleeplessness and overwhelming guilt about his lie to the pirates (and does a fabulous ballet turn, channeling his inner “swan.”) All kinds of insanity ensues but, of course, we are left with a most improbable and happy ending.

Other characters of note are the two, stand-out sisters of Mabel. On July 10, it was Hannah Wardell as Kate (she will also be on July 14, 16 and 17 and the other dates are covered by Zoe Christine). Edith was played by Cassidy Dixon and alternates performances with Hana Abrams.

Artistic Director, Catrin Rowenna Davies, herself a mezzo-soprano who has performed many times with the company, is at the helm of this production. With the assistance of Hochla who is also the choreographer, they move the large cast very well around the small stage and the pacing is excellent.

The set by Christoper Flint is simple which works because so many actors are often on stage. Since they are all decked out in beautifully detailed and brightly-colored costumes (thanks to Glenn Avery Breed and Wardrobe Witchery)—the pirates in reds, golds, and oranges and the ladies in every color of the rainbow—an intricate set is not needed and would be a distraction. Back in the day, it was the treasured and now-gone costume shop, AT Jones & Sons on Howard Street, that helped clothe the actors. But a little of the history still remains with Mary Bova, from the shop, as Wardrobe Manager.

As per the tradition, lyrics in a couple of places are updated with local references and touch on current headlines (thanks to Goodman and Mungo). Of course, it brought the house down every time!

J. Ernest Green returns as the the conductor who has been with YVTC over 20 years. He has an impressive resumé and the orchestra is just sensational–every one of them—and such a treat to have a live orchestra performing. The orchestra sits in front of the stage but it is actually part of the show as Green sometimes interacts with the cast. (If you are in the very front rows, there may be a sightline issues—Green cuts a bold figure. After awhile, the show is so much fun, it works.)

The cast has no mics and projects very well on the whole. When at the front of the stage, they are aided by two mics in the pit. If you do have any issues, supertitles are projected above the stage.

Ironically, the lack of air-conditioning forced the company to perform at other schools in the area for several years. Now equipped with the newly-installed system, the theater was freezing (perhaps it has since been adjusted), so don’t forget to bring a sweater or a jacket.

I would love to name everyone involved because it was a magnificent show on every level. A special nod also goes to the incredible chorus and their glorious voices—and the crew behind the scenes. Go see it and you will leave with a song in your heart.

Running time: Approximately two hours and 30 minutes with one intermission.

“The Pirates of Penzance”runs through July 17, 2022, presented by Young Victorian Theatre Company at the Gilman Alumni Auditorium, 5407 Roland Avenue, Baltimore, MD 21210. For more information and tickets, call the Box Office at 410-323-3077 or go online.