Theatre Review: The Second City’s ‘The Revolution Will Be Improvised’ at The Kennedy Center 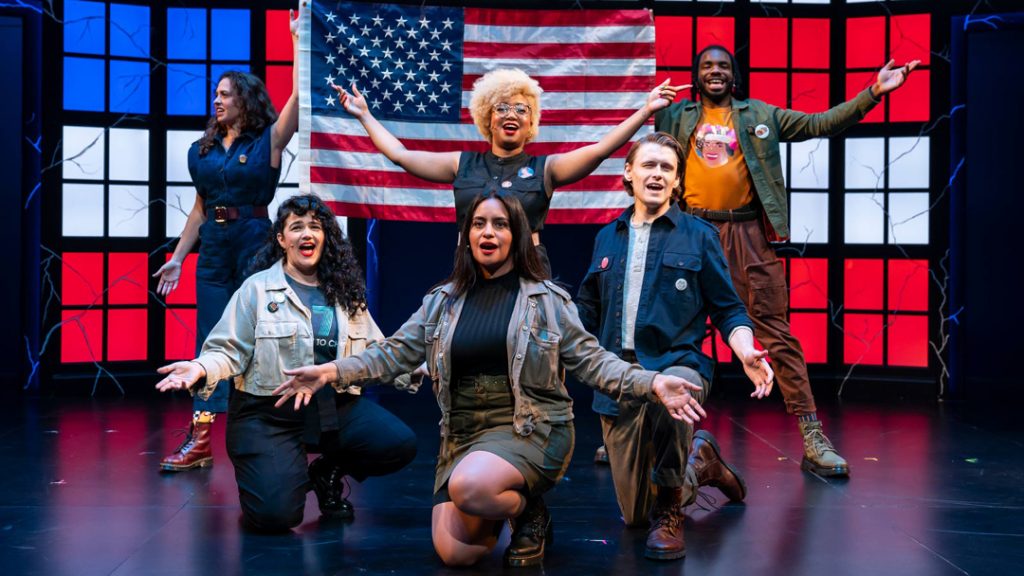 Six improv comedians walk into a theater and… well, I’m not very good at improv. The cast of The Second City’s “The Revolution will be Improvised” are more than qualified to come up with an excellent ending to that joke. Fittingly, the cast finds themselves performing in the middle of D.C. at the Kennedy Center Theater Lab as they provide a humorous commentary on the political climate of the 21st century.

Get your tickets to see this exceptional cast.

Since 1959, The Second City Theatre is the oldest ongoing improvisational theater troupe to be continually based in Chicago. The troupe has been the launchpad of some of America’s most beloved actors and comedians, including Ryan Stiles, Jordan Peele, and Tina Fey. The Second City began to tour in 1967, drawing talent from across the nation to their cast.

The ensemble cast pulls skit topics straight out of headlines: COVID-19, online first dates, presidential candidates, the infamous “Florida Man,” and gender reveal parties. As they describe themselves, their show is a mixture of improvisational and skit comedy. The first act consists of a quick series of skits that commented on protests, gas prices, internet trolls, casual racism, and returning to the office post-pandemic. We then got our first taste of their improv as they pulled years from the audience, reenacting the scene with different body language, slang, and historical references to fit the given time period.

Sara Dell’Amico pulled focus throughout the show. Dell’Amico’s stellar emotional range, combined with some briefly showcased dance ability and singing, drove the show forward. She was seldom without a clever quip or an unforeseen joke. When asking the audience to name a special skill and was supplied with “Aerials,” she did an effortless double-take, saying “no, no, we’re too far in now, I guess we’re going with aerials.” Performing said aerials was Jordan Stafford. Stafford’s exemplary physical comedy was paired with a laudable ability to quickly switch emotions, performing as a boisterous Paul Revere in one scene to talking drolly to a robocaller the next. That robocaller became self-aware through the masked form of Yazmin Ramos. Ramos approaches comedy dryly, making it all that more hilarious when an off-handed one-liner landed. Sayjal Joshi was a grounded presence, bringing authenticity and absurdity to a double’s tennis tournament, her light voice full of levity and wit. Adam Schreck is a vault of pop culture knowledge, from vintage rock records to Denzel Washington films—a talent that he showcases throughout the show. Finally, Brittani Yawn’s subtle strength through her intimate deliveries closes out the show perfectly via her passionate monologue.

The Second City writers—Edgar Blackmon, Peter Grosz, and Allison Reese—root their comedy in heart-wrenching truth but gild it with humor that makes you laugh at the state of the world. Musical Director Stuart Mott has a queue ready for any audience song submission, as well as creating a few original musical numbers (including an angsty track about the audacity of having to wait in lines). While the set is sparse (such is the nature of improv), Wardrobe Stylist Sarah Albrecht adds light touches via costuming masks and ensemble cohesion to create a sense of unity.

Every night the show is different (of course, it’s improv), but there’s one guarantee: you’ll laugh. No performance is perfect, but regardless of which performance you see, you’ll be seated in an audience hooting and hollering at the show. This performance is a safe space to laugh at the laughable current events and headlines that plague our doorsteps. Get your tickets to see this exceptional cast.

The Second City’s “The Revolution Will Be Improvised” runs through July 31, 2022  in the Theater Lab at The John F. Kennedy Center for the Performing Arts, 2700 F Street NW, Washington, DC 20566. For tickets call the box office at (202) 467-4600 or purchase online. Note: Masks are required for all patrons inside all theaters during performances at the Kennedy Center unless actively eating or drinking.