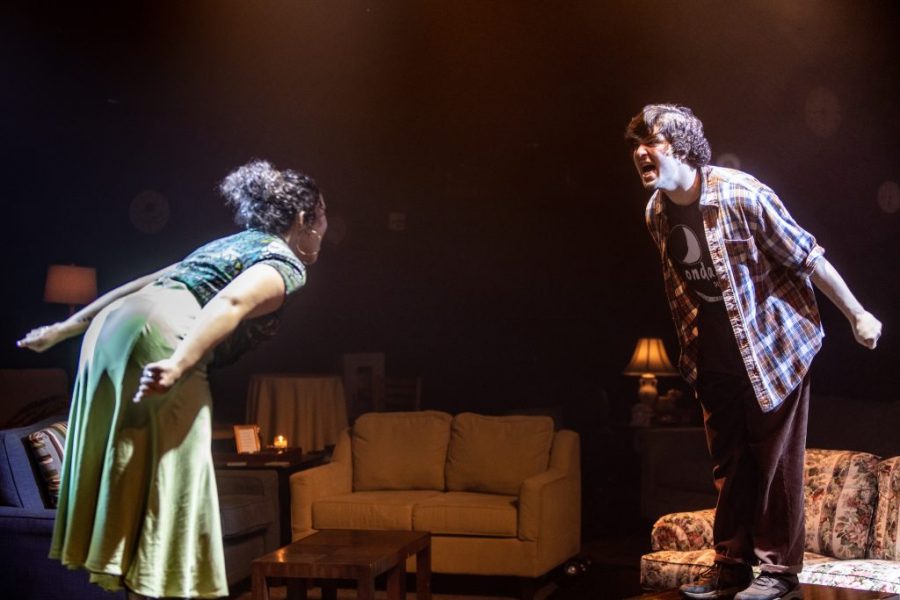 The first thing I noticed when I saw “tick, tick… BOOM!” at Monumental Theatre Company wasn’t anything related to the show. It was that the front-of-house staff member who handed me my tickets also made a special, detailed note of how I might get a drink before the show, pointing to a makeshift bar down the hall.

It’s the intimacy that makes Monumental’s production of “tick, tick… BOOM!” so effective… director Michael Windsor has clearly been meticulous in creating an atmosphere that is both casual and immersive.

Once the doors opened to the theatre for general admission seating, however, it made a lot more sense. Inside, rather than the rigid rows of slightly-uncomfortable seats, there were a few dozen pieces of used living room furniture. Couches, armchairs, coffee tables, bar stools, even large pillows on the floor were scattered throughout the black-box-like space, all pointing toward the center. On the tables sat notebooks, board games, plays, picture frames, and even bowls of candy. It quickly felt less like a night out at the theatre and more like a late-night hang at a friend’s apartment. I actually felt naked without a drink in my hand.

For most musicals, such a casual atmosphere wouldn’t work. They are usually meant to be viewed at-least at arm’s length. Then again, “tick, tick… BOOM!” isn’t like most musicals.

The semi-autobiographical musical by Jonathan Larson, famed composer of “RENT,” was originally written as a monologue, but was reworked posthumously to include two other actors for its 2001 premiere. Now most famous for the Netflix film adaptation released last year, “tick, tick… BOOM!” follows Jon, an aspiring composer making ends meet by working at a diner, in the week leading up to his 30th birthday and workshop of his first musical. He’s getting older quickly, and has little to show for the past five years he’s spent working on his show. His best friend has already given up on a life in the arts in favor of a stable job. His girlfriend is considering doing the same. He’s pegged his entire career on this one workshop. “tick, tick… BOOM!” is a musical about Jon’s anxiety as he deals with all of that at once.

That anxiety manifests itself in the form of a ticking sound, which is also the first thing we hear as the lights dim. Jon, played by Christian Montgomery, appears through a curtain to introduce himself and explain the ticking. “I want to get some writing done, but I keep hearing those tick-ticks. And sometimes, after a couple of them, I’ll hear something else⁠—a distant BOOM,” he says. In those opening lines, he lets us inside his head, which is where we stay for the musical’s 90-minute runtime. Much of what moves the show from scene to scene is Jon’s inner monologue, making this an extremely intimate show.

It’s that intimacy that makes Monumental’s production of “tick, tick… BOOM!” so effective. Although the staging is deceptively simple, director Michael Windsor has clearly been meticulous in creating an atmosphere that is both casual and immersive, which makes it really feel like we are experiencing and feeling all the things Jon does alongside him. The gorgeous lighting and enveloping sound design by Venus Gulbranson and Draper Carter, respectively, only add to that experience. The staging, too, uses the space effectively, and flows seamlessly in and out of David Singleton’s intuitive choreography. Together, they create movement that keeps the show interesting without feeling repetitive.

Of course, it doesn’t hurt to have a strong cast, and Monumental certainly has that in Montgomery, as well as Alex De Bard and Tyler Dobies, who play (among various minor roles) Jon’s girlfriend Susan and Jon’s friend Michael, respectively. All three are captivating singers, with De Bard’s solos standing out. Dobies, meanwhile, performs his comic timing and darker moments equally well. Then there’s Montgomery who manages to keep the audience engaged, with virtually no breaks for the entire show, with a commanding performance—perhaps too commanding for just a few moments in such a small space.

Most importantly, all three performers maintain a relaxed atmosphere throughout. They aren’t afraid to casually make eye contact or speak to audience members directly, as if inviting us not just to understand their anxieties, but to share in them. As Monumental’s first live production since the start of the pandemic, and produced at a time when many people feel like they’ve lost time and continue to lose time the same as Jon, creating such a casual and communal environment makes sharing in those anxieties feel natural.

After all, in Monumental’s immersive staging, we hear the same ticking Jon does, all around us.

Runtime: 90 minutes with no intermission.