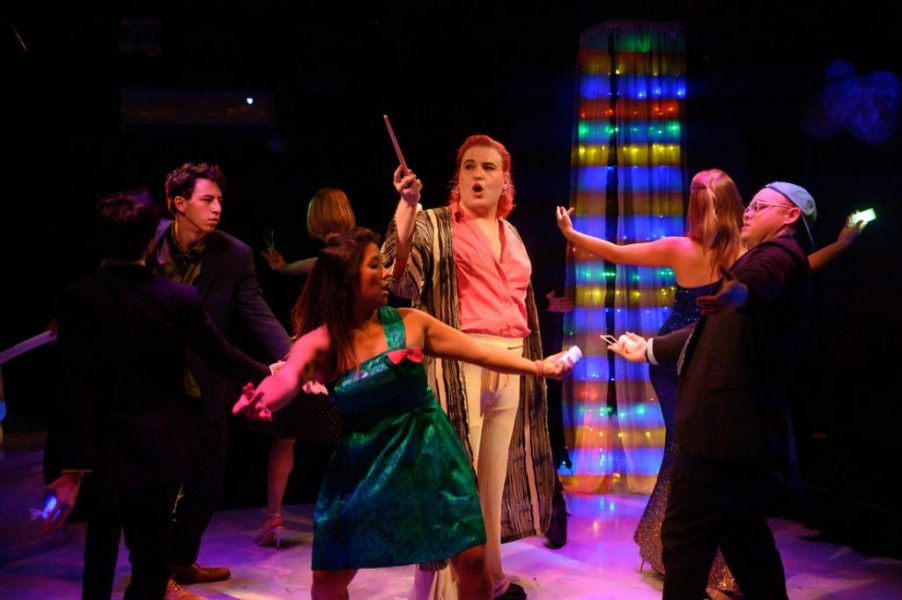 “Zanna Don’t!” is a musical in a parallel universe to the one we’re living in today. Girls are with girls, boys are with boys, and heteros are bullied. In fact, the main character, Zanna (Geraden Ward), is sent away to do community service after coming up with a school musical about those horrible heterosexuals.

First and foremost, the musical is fun. The chess champion, Mike Singer(Chris Weaver), is praised and lauded while students are forced to go to football games just so someone will show up. This illustrates just how crazy our current stereotypes are. For some reason, synchronized, mechanical bull riding is a sport after school. Zanna arranges for Roberta (Gabby Dean) and Kate (Patricia Anderson) to meet there so they can ride that bull together and fall in love. After all, Zanna is a matchmaker with a magic wand. They are also a hall monitor with a goal of getting into the National Hall Monitor Association. There are also plenty of laugh-out-loud moments in the play including when experimental theatre is cited as a reason to watch the Super Bowl, or when the football player and the cheerleader might go to San Francisco because “they hear there are other straight people there.”

But within all this craziness is a lesson. “Zanna, Don’t!” shows just how tough it has been, and is, to be gay—bullied for absolutely no reason; the absurdity of the ‘don’t ask, don’t tell’ policy in the military; and same sex couples shunned at prom, as some examples.

Everyone wants to be in love and Zanna makes this happen. The musical shows us that love is love—no matter the gender and that we all have stereotypes deeply ingrained within us. Zanna makes references to those stereotypes—chess kids are bullied while football players and cheerleaders are praised. By flipping those stereotypes on their heads, we can see them more clearly.

What made the play so wonderful is the actors who constantly change costumes and often play more than one role. The voices of all the actors are amazing, especially Zanna (Ward) who belts out the songs beautifully. Every character has a unique personality and all the actors make each of them shine through.

What also makes the play so different is the theater itself. At Spotlighters, there is no “stage.” The actors are mostly confined to a small square surrounded by the audience. Not just intimate, where you almost feel like you’re part of the show, but it allows the actors to get creative. There’s no set and props have a number of uses. At the prom, lights and tulle appear from the seemingly ordinary columns. A football appears from the ceiling. A bird conversing with Zanna is held on a stick. Clouds are lit from inside, and Zanna’s bed turns into a bench for the football game (or the chess game which is way more exciting than football). Spotlighters definitely uses this small space wisely. There’s even a small band in the corner which plays during the musical numbers. The space also means the audience interacts with the actors at some level. When someone laughs or claps, the actors definitely know.

The directing by Stephen Foreman is also amazing considering that you never feel like you’re looking at the back of the actors’ heads. Even in a setting where the audience surrounds the actors, you always feel like you’re in the middle of the action. Characters purposefully face different directions, or in the case of the mechanical bull, rotate to show everyone their special, bull riding dance.

It makes sense that “Zanna Don’t!” is based in the fictional city of Heartsville because the show has plenty of heart. This is a place full of love for ANYONE. “Zanna Don’t!” shows us a way to see a serious issue through humor. With amazing costumes by Deana Cruz-Conner, wonderful directing and acting, “Zanna Don’t” is definitely a thing to “do.”

Running time: Two hours and 45 minutes with one intermission.

“Zanna Don’t!” runs through July 24, 2022 at Spotlighters Theatre, 817 St. Paul Street, Baltimore, MD 21202. Click here for tickets. Note: Masks are required while in the lobby and theatre areas. Go to the website for information about the theatre’s upcoming 60th Anniversary season.