‘A Quick 5’ with Hannah Moscovitch, Playwright of ‘Old Stock: A Refugee Love Story’ at Theater J 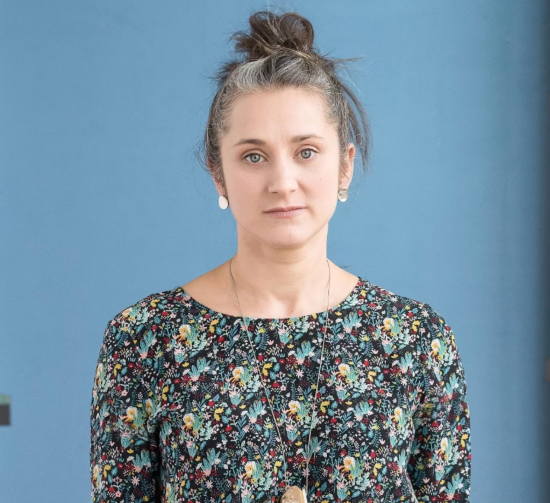 On September 7, 2022, DC’s Theater J will open their production of Hannah Moscovitch’s play “Old Stock: A Refugee Love Story.” The play was created by Hannah Moscovitch, Ben Caplan, and Christian Barry who is also the director. It is based on the story of Jewish Romanian refugees who immigrated to Canada in 1908 and was inspired by the Syrian refugee crisis. The characters are based on Moscovitch’s own family history. The play is both “edgy and funny” and immersed in klezmer music performed by Ben Caplan, an acclaimed klezmer concert performer in Canada.

Hannah Moscovitch was born in Ottawa, Canada. Her father is of Jewish-Romanian and Ukrainian heritage. Although raised an atheist Moscovitch’s plays have, according to her, an “implicitly Jewish sensibility.” She was first noticed as a merging playwright when she wrote two short plays for Toronto’s SummerWorks. In 2005, her first play “Essay” was about gender politics. Her next play, “The Russian Play,” about a romance in Stalinist Russia, was well received. In 2007, her first full-length play, “East Berlin” premiered at the Tarragon Theatre School, focusing on children of the Holocaust. 2013 saw the premiere of “This Is War,” a play depicting the lives of Canadian troops in Afghanistan which won multiple awards. Her other works include “In This World” (2008), “The Children’s Republic” (2009), “Little One” (2011), “This is War” (2012), “I Have No Stories to Tell You” (2013), “Infinity” (2014), “What a Young Wife Ought to Know” (2015), “The Kaufman Cabaret” (2016), “Secret Life of a Mother” (2018), “Sky on Swings” (2019), “Sexual Misconduct of the Middle Classes (2020), “Post-Democracy” (2021) and of course “Old Stock: A Refugee Story” (2017). In 2021, Moscovitch created the drama series, “Little Bird for Crave,” along with Jennifer Podemski. She is married to director, Christian Barry.

Your play “Old Stock: A Refugee Love Story” was inspired by the treatment of Syrian refugees.  How do you think the stories of Eastern European, Jewish refugees are the same, and how are they different?

I wanted to write about my own family story because the stories of Syrian refugees felt so achingly similar to the stories of my Jewish, Romanian great-grandparents—a war-torn landscape, followed by a dangerous and desperate journey. Then you are in a new country where you are an alien and face both the heartbreak of what you’ve lost and the stupid, xenophobic fears of the population into which you’ve arrived. I wrote the play in response to Prime Minister Stephen Harper saying our universal health care was for “old stock” Canadians. I had to ask myself who he meant by old stock. Was I included in or excluded from that category? Either way, it felt like a dog-whistle term. Stephen Harper was anti-immigration. Since then, Justin Trudeau came to power and immediately admitted 25,000 Syrian refugees into Canada. A lot of Syrian-Canadians have arrived and settled in Halifax where I live and the city has transformed. It’s been kind of wonderful.

Your story takes place in Canada in 1908. My father-in-law arrived from Romania about 10 years later. In New York they almost all lived in the Lower Eastside of Manhattan where most Eastern Jewish refugees lived when they first arrived. There are similar areas in many U.S. cities. Were there parts of Canadian cities that has similar sections and if so, in which cities?

Of course. Mordechai Richler’s Montreal Jewish neighborhood that he details so beautifully in his novels. (Saul Bellow also hailed from Montreal). There is a sizable Jewish neighborhood in Montreal now. It’s where my family settled and Jewish Montreal is featured in “Old Stock: A Refugee Love Story.”

We’re speaking about Romanian Jews coming to Canada so it makes sense to be influenced by the music they brought with them. But that is Ben Caplan and Christian Barry’s department. They wrote the beautiful music.

When you looked back at this part of your heritage, did you find out anything that surprised you?

I learned so much about who my great-grandparents were. I got to know their personalities! I thought a lot about how the decision they made to come to Canada was the line between life and death. All the family members who stayed in Romania and the Ukraine were murdered in pogroms or in the Holocaust.

I know that the director Christian Barry is your husband. Do you prefer working together or separately?

I love working with my husband because he’s extraordinarily talented. I saw his work and admired it well before I ever met him or became romantically involved with him. We have similar aesthetics which makes working together amazing. The downside is the question of who is with our son. It becomes very hard when we’re doing 12- to 14-hour days together.

“Old Stock: A Refugee Love Story” runs from September 7-25, 2022 at at Theater J, Aaron and Cecile Goldman Theater in the Edlavitch DC Jewish Community Center (EDCJCC), 1529 16th Street, NW, Washington, DC 20036, four blocks east of DuPont Circle. For information and tickets, go to this link or call the Box Office at (202) 777-3210. TICKET OFFICE HOURS: 1:00–5:00 pm, Monday-Friday, and one hour prior to performance. Parking should be reserved in advance. Theater J’s website suggests ParkWhiz.