‘A Quick 5’ with Reggie Rice, Comedy Illusionist of ‘Fool of Illusions’ 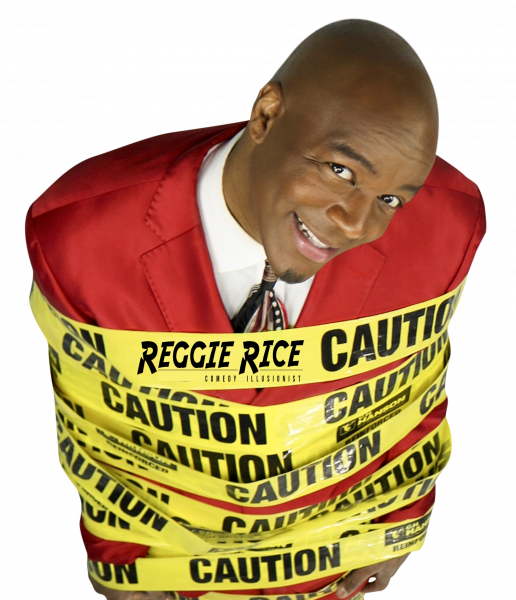 Comedy illusionist Reggie Rice has had the passion to perform ever since he can first remember, but it wasn’t until the age of 19 at a food show convention in Ocean City, MD that the magic bug finally bit him. From that moment on, Rice was catapulted into the world of magic via the International Brotherhood of Magicians and the various magicians that he credits with his inspiration to perform. What began as hosting magic parties at a family entertainment center called the Hyperspace Fun Center eventually transformed into a full fledged career as a three-time award-winning best DC Comedy Magician with prior performances for former first lady Michelle Obama and other celebrities to boast. With sixteen years of experience under his belt, Rice aims to lead a comedy illusion tour of epic proportions around the entire DMV over the course of the next year. Reggie Rice and his assistant perform his famous washer and dryer illusion.

Rice’s current show that he is touring with is entitled “Fool of Illusions” and will begin its 90-minute theatrical ride at the Port Tobacco Theater this coming Saturday. The show is full of mind-blowing magic, hilarious comedy, and foolish antics that will have people of all ages bursting into laughter. Filled with spectacular brand-new illusions, this show is guaranteed to have everyone on the edge of their seats with unadulterated fun and excitement.

What first got you interested in becoming a comedy illusionist?
I discovered the world of magic by what I call pure sleight of chance. I have always enjoyed entertaining and making people laugh from the time I could walk and talk. I would go on to perform in every chorus concert, school play, and talent show until the late age of 19. Then, I found my passion for magic after meeting the award-winning master magician, Geovanni Lavera, after he performed at a food show convention in Ocean City, MD.

What is your favorite illusion to perform and why?
I have spent 17 years working my illusion show. Half of my show is illusion that I have built and designed myself so I could retain creative control. I have three that I love and of which I am very proud—my washer and dryer, transporter, and TSA illusions.

Can you let us in on any of your magician’s secrets?
Can you keep a secret? Well, so can I.  But I’ll tell you something that is NO secret. I LOVE performing, making people smile, and spreading the magic of laughter.

If you had not to become a magician, what career path would you have chosen instead?
I would be an actor and I guess that is what I am. A magician is an actor playing the part of a magician. However, I love building things and working with my hands too, so maybe a carpenter.

What can the audience expect when coming to see your show?
A family-friendly show that is filled with amazing magic, hilarious comedy, and tons of audience participation. My show takes the audience on a magical adventure into my wild imagination!

Reggie Rice’s “Fool of Illusions” tour begins at the Port Tobacco Theater at 508 Charles Street La Plata, MD20646 on Saturday, August 20th, 2022 and continues onto various venues located throughout the DMV. For more information and to purchase tickets, please visit his website here.