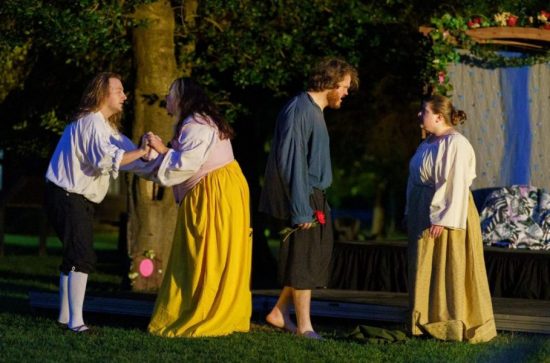 From left to right: Steve Pugh as Demetrius, Emily Quade as Helena, Brandon Maher as Lysander, and Camilla Rodgers as Hermia.

Outdoor productions of Shakespeare’s plays during the summer have always been a welcome addition to the season. Allegedly, the origin of this practice occurred in 1884 at the Surry, England estate of Lady Archibald Campbell, a society woman who kept the company of many famous artists of her time—Oscar Wilde among them. (All of the tickets’ proceeds of the Surry productions went to charity.) The Newtowne Players (NTP) continues this tradition at southern Maryland’s beautiful, Historic St. Mary’s City with one of Shakespeare’s most beloved comedies, “A Midsummer Night’s Dream,”

…not to be missed…delightfully comic adventure…

“A Midsummer Night’s Dream” tells the ethereal story of four people who run away into the forest one night only to get caught up in the absurd trickery of the fairy kingdom. By night’s end, two men have been bewitched to love different women; a fairy queen has fallen in love with a man who has the head of a donkey; and a motley group of tradesmen rehearsing a play is missing one of their actors thanks to some fairy mischief. All ends well with the laughter and merriment one comes to expect from this Shakespearean classic.

The entire company commits to the world that Shakespeare created in an authentic way and touches the audience with their enthusiasm. Among the standouts in the cast were Camilla Rodgers as Hermia, Shemika Renee as Titania, and Aaron Meisinger as Nick Bottom/Pyramus. Rodgers brings a heart-warming vulnerability to Hermia that connects on a personal level. I felt both her joy and her despair throughout the events of the play and her vocal cadence brought the character to life in a novel way. Renee’s Titania is a woman who recognizes her own power and is having absolutely none of the nonsense dished out to her by her husband.

Meisinger had me laughing just about every time he was in a scene. His comedic timing as Nick Bottom is at a caliber that I have only seen with a few other actors in the area. He added hysterical, ad-libbed moments to his lines that kept reminding me just how timelessly funny Shakespeare’s writing can be.

Direction by Beth Sanford brings a seamless, thematic element throughout this production by utilizing fairies of various ages (including a baby fairy in a backpack carried by her parent) to perform the set changes. The use of live music during these changes also kept the audience engaged. This creative choice made it feel that the fairy narrator, Puck (earnestly played by Rachel Fusso), was orchestrating everything with his magic. Sanford’s direction makes Shakespeare’s words relevant in this century through her strategic casting choices and updated interpretations. Both the Duke, Theseus, and Egeus, the father of Hermia, were played by women. This brought an added layer to their interactions that softened the outdated, patriarchal nature of the characters.

Jennifer Ogborne’s costume design brings a mystical and whimsical energy to the story from the moment the production begins. Her inventive choices help to further frame each actor’s character, enhancing them with refreshing clarity. The costuming of the fairy queen Titania brought a sense of power and maturity to her character—from the choice to put her in pants and a front open skirt in lieu of the more traditional choice to the judicious use of an oversized, hand-held fan with a beautiful, butterfly pattern. Other worthy mentions are the Wall’s shirt design, Nick Bottom’s donkey head, and the various fairy costumes, with their own individual motifs that defined each character.

NTP’s annual, outdoor Shakespeare production at Historic St. Mary’s City is one not to be missed, particularly this year because they chose a light-hearted comedy—perfect for a summer night overlooking the water, with lightning bugs hanging in the air. Get ready to join the Bard on this delightfully comic adventure of what may have just been a midsummer night’s dream.