Theatre Review: ‘American Prophet’ Frederick Douglass in His Own Words at Arena Stage 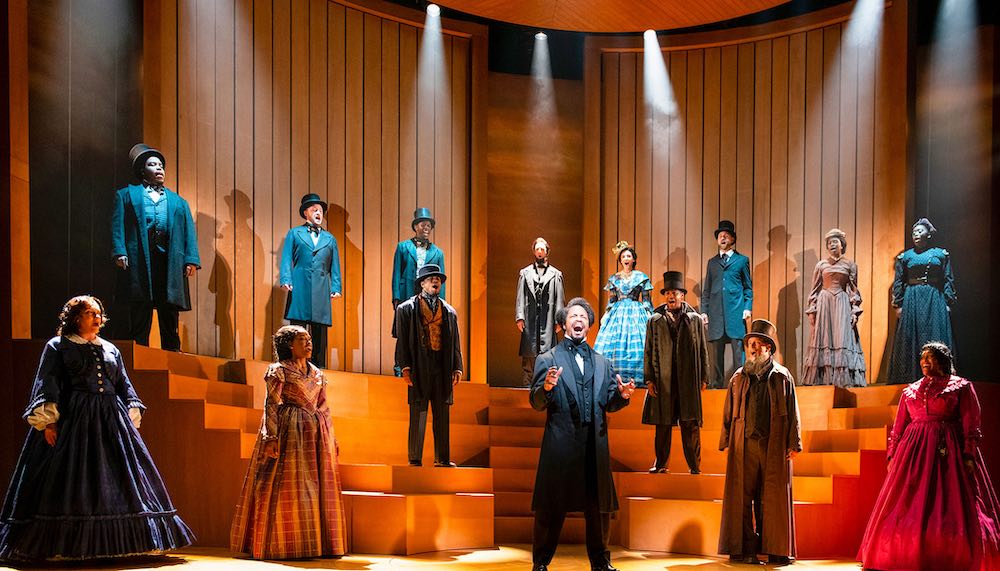 Cornelius Smith Jr. as Frederick Douglass and the cast of “American Prophet.” Photo by Margot Schulman.

Frederick Douglass’ spirit is once again gracing the nation’s capital in a world premiere of “American Prophet.” The musical, based on his writings and speeches, resoundingly demands racial justice in America more than 125 years after the great orator, author, and abolitionist walked the streets of Washington, DC and made his home in Anacostia.

…powerful, new musical…If you only see one show this summer, make it ‘American Prophet.’

Directed by Charles Randolph-Wright, with music by Grammy-award winner, Marcus Hummon (both also wrote the book), “American Prophet” is filled to the brim with catchy tunes and memorable melodies that keep the action moving at a brisk pace. The story encompasses Douglass’ years as an enslaved child in Maryland, his escape to freedom, and finally his rise to fame as the founder of the civil rights movement in America.

Notable performances abound. Douglass’ grandmother, Betsey Bailey (Cicily Daniels) sings a haunting, “If I Were You’re Mother,” to the young Frederick Douglass (Cornelius Smith Jr.) who has only the vaguest memory of his mother, having been taken from her as an infant. When Douglass meets his wife, Anna Murray Douglass (Kristolyn Lloyd) for the first time, the two sing a touching duet, “Children of the Same River.” The second act features abolitionist John Brown’s “Hands,” sung as he prepares to take up arms to free the enslaved. Two notable duets, “I Love a Man” and “Let the Storm Come,” are performed by Frederick and Anna as expressions of the challenges they have experienced by committing themselves to the struggle and each other. A reprise of ‘We Need a Fire,” sung by the entire ensemble, closes the show.

Thomas Adrian Simpson (Abraham Lincoln) plays a sympathetic and honorable Lincoln, while also communicating the President’s own need to evolve in his understanding of the issue of slavery. Kurt Boem (Reverend Gore and Edward Covey) corners the market on white male arrogance, and Chris Roberts embodies the rage and impatience of John Brown, a visionary abolitionist ahead of his time. Kristolyn Lloyd projects Anna Douglass’ sharp intelligence and fierce dedication to the cause, and Cornelius Smith Jr.—elegant, erudite, and fiery—projects such authenticity that he may just be Douglass back from the grave.

The drama of a nation marching toward civil war takes place on a minimalist set by Arnulfo Moldonado, which allows for a greater emphasis on the intensity of the subject matter, powerfully delivered score under the direction of music director, Joseph Joubert, who also provided the orchestrations, and lush period costumes by Dede Ayite.

This powerful, new musical speaks to contemporary America’s ongoing racial animosity in the words of an American prophet—words that still ring true, still exert a raw power, and can still convince us that “we need a fire.” If you only see one show this summer, make it “American Prophet.”

Running Time: Two hours and 15 minutes including one 15-minute intermission.

“American Prophet” runs through August 28, 2022 at Arena Stage at the Mead Center for American Theatre, 1101 Sixth Street SW, Washington, DC 20024. For more information or to buy tickets, call 202-488-3300 or click here. Arena Stage requires all patrons to present proof of full vaccination and to wear a mask while inside the Mead Center as well as in the theatre.