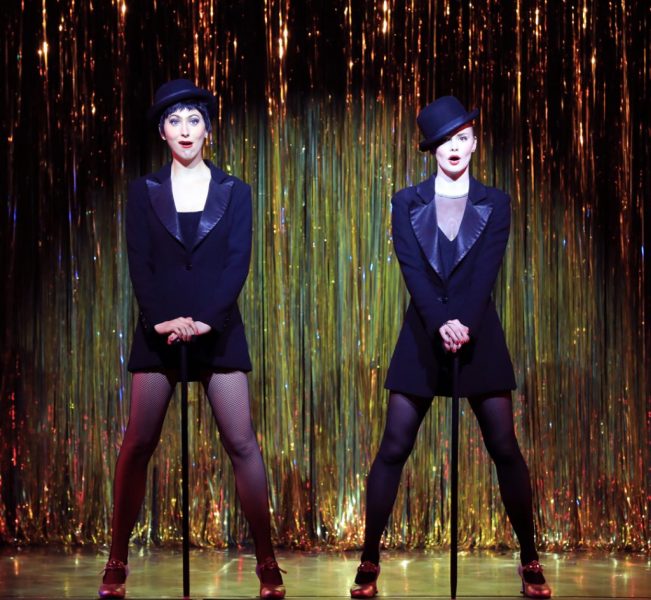 Travelers to Pennsylvania Dutch Country will find an entertaining, top-notch production of the musical “Chicago” at the Dutch Apple Dinner Theatre in Lancaster, PA. In this highly popular Broadway musical, a young married woman, Roxie Hart, shoots her lover and goes to jail. To save her from the fate of being hanged for murder, she and her husband hire a high-powered lawyer who creates a special identity for her as a runaway convent girl who has found redemption. Will Roxie be exonerated of murder? Will her new-found celebrity status be an advantage or detriment to her case?

In this production, there is always something new and unexpected—even for seasoned fans of “Chicago”—starting with the cast. Roxie Hart is played by Katie Frieden, who has not only magnificent singing and dancing skills but also a fabulous use of a thousand facial expressions—expressions which capture the character’s every mood as she rides the emotional rollercoaster of angst and confidence during the trial. This facet of Ms. Frieden’s characterization through mimicry and gesture is notably utilized during “We Both Reached for the Gun”—Roxie’s highly entertaining duet with her lawyer, Billy Flynn. Billy is portrayed with equal verve by Edward Miskie as he acts as her ventriloquist to her dummy in this memorable number—one which furthers the plot as well as serves as a highly entertaining song. Mr. Miskie dazzles as Billy. Dressed like a showman, the high-powered lawyer takes on a larger-than-life presence when surrounded by chorus girls waving large white plume feathers in the production number, “All I Care About.”

The highly disciplined choreography is expertly recreated from the Broadway production by Gary Chryst, with abstract geometrical patterns of feathers reminding one of Busby Berkeley’s musical Hollywood productions. Likewise, the direction by Tânia Nardini follows the lead of the long-running Broadway production.

The talented Logan Floyd gives a tour-de-force performance as Velma Kelly, another prisoner accused of murder who leads the cast in rousing numbers such as “All That Jazz” and “Cell Block Tango.” Matron “Mama” Morton is voiced and acted powerfully by Christina Wells in her showstopper “When You’re Good to Mama.” She also duets wonderfully with Velma/Logan in the song “Class,” a number not included in the final cut of the 2002 Academy Award-winning, film adaptation.

The part of Roxie’s husband, Amos Hart, is indeed a challenge to portray, as the character comes across as an overall loser. Yet singer/actor Brian Kalinowski gives life and depth to this pathetic, put-upon man who cannot even convince the orchestra to provide him with exit music. Mr. Kalinowski captures the audience’s sympathy, especially in his well-voiced song, “Mister Cellophane.”

As implied, the conductor and orchestra become “characters.” Orchestral director, Cameron Blake Kinnear, leads the musicians through effective sound effects which complement the action on stage, such as when drums are used to represent gunshots. Mr. Kinnear even speaks a few lines when Roxie shows him the paper with the screaming, broadsheet headline, “Roxie Rocks Chicago!” In addition, the orchestra recreates an authentic 1920s Jazz Age sound with trombone and trumpet mutes as the dancers and main characters fall into Charleston dance mode. Pianist Jacob Kidder provides a honky tonk-style piano, especially memorable in “Mr. Cellophane.”

Ornate props with flamboyant over-the-top feathers, Broadway canes, and showmanship costumes give the show a decided Broadway feel, at the same time contrasting well with austere staging. There are no sets except the on-stage orchestra and a few chairs—an enormously effective strategy which encourages the audience members to use their imaginations.

The musical, and especially this production, has a Brechtian touch, in which stylized moments are used in order to create a cabaret style as well as to remind the audience at all times that this is a staged performance. Through this unique prism, there is more here than meets the eye. “Chicago” is not just an entertaining musical but it encourages the audience to examine American culture’s focus on celebrity and fame.

A salient example of the stylization of the show occurs as Velma and Mama are listening to news about Roxie’s trial on the radio. Instead of a prop, reporter Mary Sunshine (G.A. James) reads the news in the background, and Velma and Mama position themselves in the shape of a vintage, cathedral-style radio, and the classic NBC chimes ring out twice.

Enhancing the spirit of the cabaret-style show, the abstract use of red lights represents violence during the narrative. There is a also solid use of lighting as characters are introduced in silhouette, thanks to the efforts of lighting designer Russell A. Thompson.

Theatre-goers who are looking to give their summer “Razzle Dazzle” with a “splendiferous” show (to quote this musical’s song lyrics) need look no further, for “Chicago” is the ideal show to see on a trip to Pennsylvania Dutch Country. It will also provide a vicarious travel experience back to the naughty, celebrity-driven Chicago of the 1920s.

Running time: Two hours and 30 minutes with a 15-minute intermission.