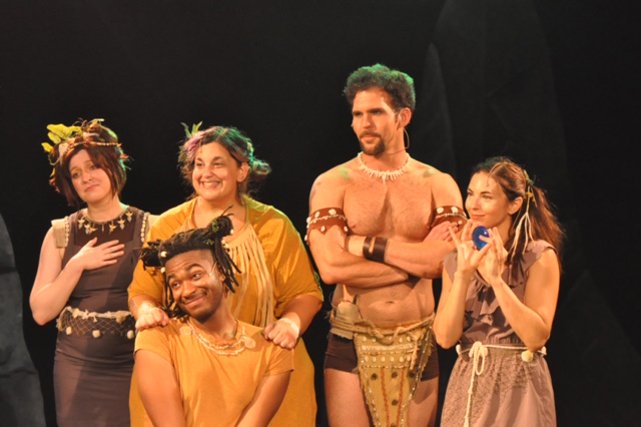 ‘Firebringer: A New Stone-Age Musical’ is a laugh-out-loud reminder that the more things change, the more they stay the same. Directed by Michael Page with musical direction by Chad Rabago, ‘Firebringer’ is as much a commentary on contemporary life as it is a humorous look at humanity’s first attempts to organize itself.

The cast demonstrated an immense amount of vocal talent as well as a gift for comic timing.

When we stumble on these early Homo sapiens, their leader, Jemilla (Jessi Scott), has gained the title “Peacemaker” because she was able to resolve an on-going conflict between tribe members Smelly-Balls (Glenn Williams) and Chorn (Edward “Teddy” Nagel). Following a blessing from the Almighty Duck, Jemilla speaks with the tribe’s former leader, Molag (Melanie McGuin), who admits she invented the group’s belief system to better control them. Jemilla is shocked when Molag tells her that Almighty Duck is not a deity and Tiblyn’s (Sara Alipanah) years of holding up the world with her bare hands has been completely unnecessary.

As the story unfolds, Schwoopsie (Erin Kemp), the inventor of comedy tells her one joke, and Emberley (Melanie Kurstin) befriends an outsider named Grunt (Cameron Powell) who is promptly chased away by the group. Jemilla announces that the duck is not divine, and Tiblyn can drop her arms without the sky falling in and killing them all. Ducker, the Duck’s vicar on earth, (Ryan Washington) is outraged at the loss of his privileged status, and Tiblyn, the loss of her life’s purpose.

Most importantly, Zazzalil (Lindsey Capuno) invents the spear, and Jemilla and the tribe declare the invention worthless, turning on Zazzalil. In a fit of frustration, Zazzalil leaves the cave in the dark of night to prove the spear’s value, accidentally inventing fire at the same time. Zazzalil exploits the tribe’s amazement at this new creation to convince them to banish Jemilla and make her the group’s new leader.

When Act II opens, the tribe is enjoying the benefits of fire but also coming to see the drawbacks, Jemilla is enjoying herself in exile as she is now the leader of a new tribe full of beautiful people, and Duck attempts to reclaim his priestly power by announcing that he can interpret Fire’s wishes. Grunt reappears before being snatched by the bloodthirsty Smilodon, Snarl. Unfortunately for Grunt, the flame has gone out and the tribe is again without fire.

Fire or no fire, the tribe decides to rescue Grunt. They try scaring Snarl with a picture of fire etched on a stone. When this fails, they attempt to stab Snarl with spears and miss, but through a lucky twist, create fire again by rubbing together the stones on their spears. They set Snarl on fire, killing him and saving Grunt. In a final surprise, Chorn announces he is an alien, takes credit for the existence of fire, and shares his knowledge of humanity’s future with the tribe.

The cast demonstrated an immense amount of vocal talent as well as a gift for comic timing. Notable performances included Emberly and Grunt’s duet, “Just a Taste,”  Zazzalil and Jemilla’s “Together,”and  Chorn’s “Chorn.”  High energy ensemble pieces included “Fire,” “The Night Belongs to Us,” and “Ouch, My Butt.”

If you missed “Firebringer,” Dominion Stage’s 73rd season has just begun with a selection of must-see productions!

Running Time: Two hours and 35 minutes, including one 15-minute intermission.