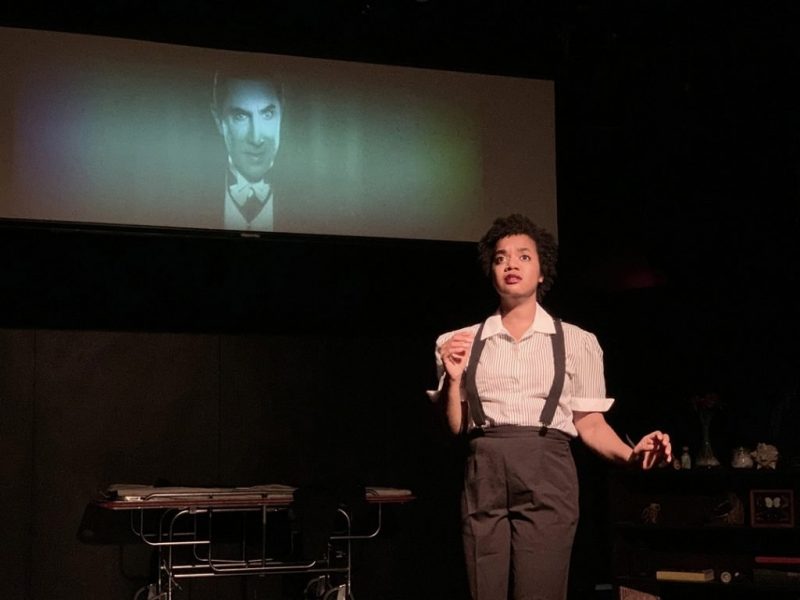 Coil Project’s world premiere of “Forgotten Monsters of Filmland” picks up the stories of classic literary characters whose lives, as reimagined in this production, continued on even after authors Bram Stoker (Dracula) and Mary Shelly (Frankenstein) put down their pens. Written by Rebecca Fischler, the story takes place in 1930s Hollywood and the fictional Miskatonic University, with occasional flashbacks to 35 years earlier, when the characters had their first encounters with Dracula and Frankenstein’s monster.

…an evening of zany entertainment…See this unique and quirky production before it’s gone.

Dracula’s first victim, Lucy Westenra (Jessica Ludd) and Roderick Renfield (Dylan Mahoney), formerly Dracula’s fanatical disciple, are now working in the film industry when a series of murders convinces them that something is afoot in Tinsel Town. They contact their old friend, Elizabeth Frankenstein (Brigid Wallace), victim of her former husband Victor Frankenstein’s (Matthew Marcus) monster.  Elizabeth has since transformed herself into Dr. Levanza, and recently joined forces with Herbert West (Marcus) at Miskatonic to secretly study the “undead.”

The group returns to Hollywood and an investigation full of startling twists and turns ensues.  In a satisfying finale, the action culminates in the dramatic empowerment of this collection of former victims when they are finally able put a stop to the old-world evil that had quietly crossed an ocean and planted itself in sunny, southern California.

The intimate setting is ideal for this production. Occasional black and white video appears above the simple set, lending a certain silent film aesthetic to the proceedings. A hospital bed serves as the primary prop, reminiscent of the many instances in which Dracula’s victims languished under a confused doctor’s care, or Frankenstein’s victim, Elizabeth, lost her life as she slept in her honeymoon suite.

“Forgotten Monsters of Filmland” provides an evening of zany entertainment, and an opportunity to expand your view of these classic monsters. See this unique and quirky production before it’s gone.

Running Time:  Approximately one hour and 45 minutes with no intermission.