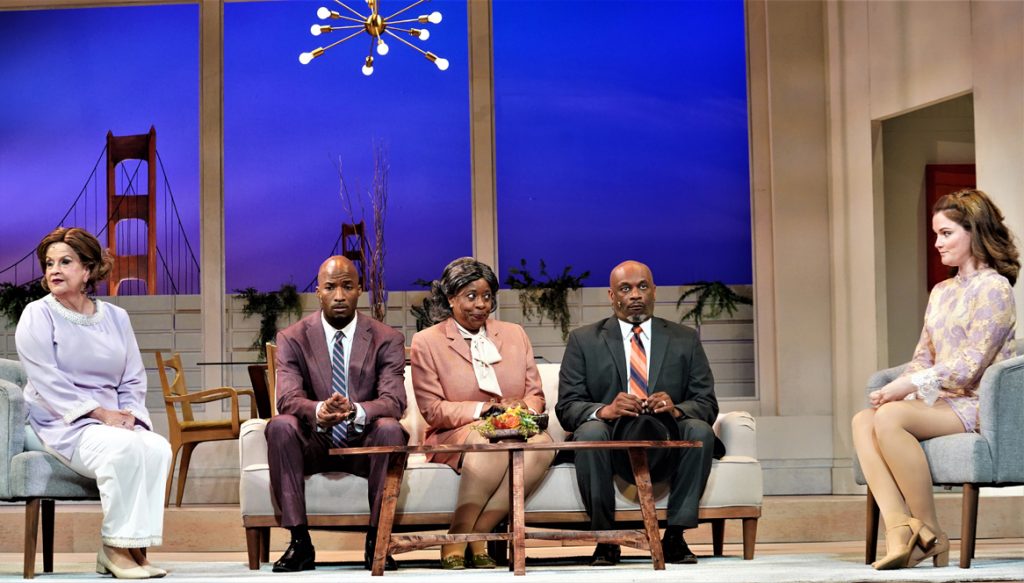 The cast of “Guess Who’s Coming to Dinner.” Photo Courtesy of Riverside Center for the Performing Arts.

Many dinner theatres run primarily on popular musicals. Patrick A’Hearn, producing artistic director of Riverside Center for the Performing Arts in Fredericksburg, Virginia, challenges this trend by presenting at least one non-musical production per year. His selection this year is “Guess Who’s Coming to Dinner,” a bold choice in spite of being based on an award-winning film from 1967.

…especially memorable through its exploration of universal and timeless, family dynamics and conflicts.

The daughter of a liberal, wealthy, White couple falls in love with a Black doctor. Despite the doctor’s sterling character, professional success, and their own principles, the parents initially find the match off-putting. It is this fluctuation on their part—as well as the concerns of the Black doctor’s own mother and father and those of the White family’s Black maid—which gives this play such emotional depth. Young love and social idealism face off against societal conventions, parental expectations, and even outright bigotry.

The direction of Anita Gonzalez is marvelous. In her hands, the characters are shown to be emotionally complex individuals desiring to do the right thing, even when working at cross purposes with the other characters. While the themes of the play are serious and much of the action is dramatic, there are also comic moments. This variation enhances the emotional impact of the story while also making it more relatable. The actors themselves do an outstanding job of making the characters their own, rather than playing them as an homage to the original movie’s star cast that included Sidney Poitier, Katharine Hepburn, and Spencer Tracey. The actors portraying the two young lovers, Dr. John Prentice, Jr., (Marc D. Lyons) and Joanna Drayton (Rachel Pulley), have excellent chemistry. They are compelling in their roles as a daughter who begins to confront her parents, likely for the first time, and the son who is forced to confront his father. Mr. Lyons’ scene with his father, John Prentice, Sr. (Neal Grace-Burks), is especially poignant as the two men struggle to overcome generational shifts. As for the maid Tilly, Nancy M. Crawley is outstanding in showing how her character’s understanding deepens as the play progresses. Initially a problem-maker, she later becomes a problem-solver.

Robert Biederman fully immerses himself in the role as Joanna’s father Matt Drayton, an avowed liberal who suddenly feels conflicted by Joanna’s choice of a husband-to-be. Mr. Biederman deftly moves through a variety of emotions in the course of the play. Similarly, the evolution of the two mothers’ relationship is portrayed movingly by Kathy Halenda as Christina Drayton and Crystal Henry Arful-Addoh as Mary Prentice. While the two have vastly different backgrounds and experiences, they transcend their differences over the shared experience of the loss of a son on the Draytons’ side and the loss of a grandson on the Prentices’ side.

Monsignor Ryan, portrayed by Alan Hoffman, is also a treat. His character might be expected to be a voice of tradition, but he is instead forward-looking. Mr. Hoffman does an excellent job of making Monsignor Ryan strongly supportive of the young couple, while urging Matt Drayton to return to his better nature.

The show carefully establishes the time period as the 1960s, a time during which interracial marriages were only just becoming legal in many U.S. states. Music of the 1960s and earlier can be heard, such as “Theme from ‘A Summer Place,” The Platters’ “Only You,” and “The Glory of Love” (originally recorded by Benny Goodman and later appearing in the original film). The set features modern art incorporated into 1960s décor. Characters also wear fashions of the era. The San Francisco setting is signaled by a picture-window view of the Golden Gate Bridge. Scenic designer Frank Foster, lighting designer Weston Corey, costume designer Kyna Chilcot, and sound designer J. Pat Bragg, Jr., all deserve praise for creating a convincing 60s atmosphere in a subtle, rather than an overwhelming, way. The play would have less impact if it came across as purely a period piece.

This production of “Guess Who’s Coming to Dinner” is highly recommended. It is engrossing in its exploration of its theme—one which is still very much of interest today—but is made especially memorable through its exploration of universal and timeless, family dynamics and conflicts.

Running time: Two hours and 30 minutes including one 15-minute intermission.

“Guess Who’s Coming to Dinner” runs through September 4, 2022 at Riverside Center for the Performing Arts, 95 Riverside Parkway Fredericksburg, VA 22406. For more information and tickets, call the box office at (540) 370-4300 or go online. COVID protocols do not include masks or proof of vaccination.