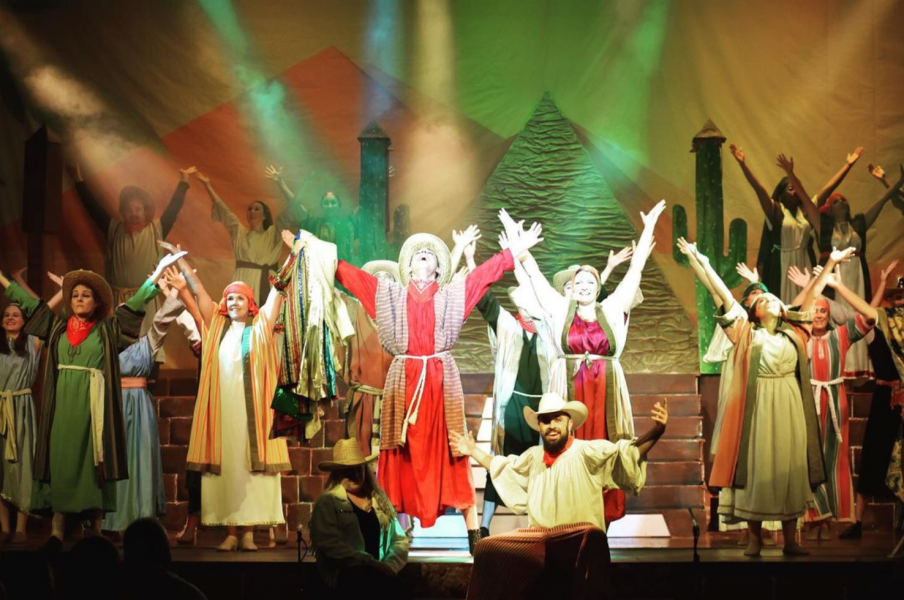 The cast of Glyndon Area Player’s “Joseph and the Amazing Technicolor Dreamcoat.” Photo by Bethany Nusbaum.

Many theatres are back in person for the first time this summer since everything was shut down due to the pandemic. This is true for Sacred Heart’s Glyndon Area Players (GAP), who have returned to the stage for the first time since 2019—and for their 25th anniversary. With this production of “Joseph and the Amazing Technicolor Dreamcoat,” GAP revisits the show that marked the start of the company, celebrating the joy of live theatre and community.

…this show feels like a new chapter and a new start—and I can’t wait to see what they do next!

“Joseph and the Amazing Technicolor Dreamcoat,” with lyrics by Tim Rice and music by Andrew Lloyd Webber, began as a 15-minute school concert that was then expanded into a concept album in 1969 before getting a staged version. This musical comedy is based on the biblical story of Joseph. It is told through nonstop music from a variety of genres bound to get stuck in your head and leave you wanting to sing along.

The show opens with a beautiful overture played by the orchestra, led under the direction of Ben Fish, and it isn’t long before you are transported into a spectacular world of color. All elements of the production worked together to become a true feast for the eyes. Lightning designer Jim Shomo outdid himself and you can tell he had fun leaning into the vibrant palette of the show. I particularly appreciated his design choices for “Joseph’s Coat.” The exciting rainbow of upbeat numbers like “Go, Go, Go Joseph” contrasted nicely with the more subdued blue hues for the emotional and dramatic “Close Every Door.”

The set design by Homero Bayarena and Michael Parks establishes the Canaan setting and is cleverly crafted to allow for seamless transitions as the story travels to Egypt and back. Its many levels and play areas made for intricate and varied staging that aided the storytelling. The costumes, designed by Homero Bayarena, Elaine Bayarena, Kari O’Donnell, and Susan Zepp managed to pay homage to the traditional clothing of the era while mixing with the fun, contemporary elements echoed in the show’s music, including cowboy hats, sequins, and sunglasses.

Decorative dressing is nothing without a strong cast, and the community members of Glyndon Area Players are just that. Colleen Esposito, who plays the Narrator, effortlessly captures the audience’s attention from her first entrance and easily carries the story, keeping the audience on the right page through the show’s many locations and musical numbers. She binds the show together with her clear focus and stunning soprano voice. Henry Cyr’s Joseph, the titular role, wins the audience’s hearts and has you rooting for him throughout the whole journey. His voice is one that makes you want to listen, especially when he sings “Close Every Door” towards the end of Act 1.

The Pyramid Chorus, an ensemble of children, is seamlessly woven into the staging and the musical numbers. I particularly appreciated their use of sign language during a few of the songs. These adorable kids are bound to put a smile on your face. The 11 actors who play Joseph’s brothers bring so much humor and quirky individuality that each of them is memorable.

Kenny Alam as Judah displays such energy, passion, and commitment combined with clear dance skills that he is bound to catch the eye during ensemble numbers and dance breaks. You feel his love for performing every second he is on stage.

The cast clearly had so much fun in this show. One contributing factor could lie in the choreography crafted by Lori Maccia. The high energy imbued in these numbers made them a delight to watch, just as much as I’m sure they were to perform. Dances as colorful and spirited as the music they were set to, such as during the “Hoedown,” most definitely earned the roaring applause they received. By the end of the show, the crowd was all on their feet, even before bows began.

This production is one the whole family will enjoy and it was a great pick for the Glyndon Area Players for this season. The company began thanks to a group of friends with a dream and a desire to perform and showcase local talent. This is the third time they have done “Joseph and the Amazing Technicolor Dreamcoat”—it was the company’s first production and was also performed for their 10th anniversary. As the show says, “If you think it, want it, dream it, then it’s real,” a quote I’m sure was inspirational in the founding of the company. The persistence of the dream is what allowed them to continue even today. Director Homero Bayarena refers to this show as the first chapter of their story. Twenty-five years later, this show feels like a new chapter and a new start—and I can’t wait to see what they do next!

Running time: Two hours and 15 minutes with a 15-minute intermission.