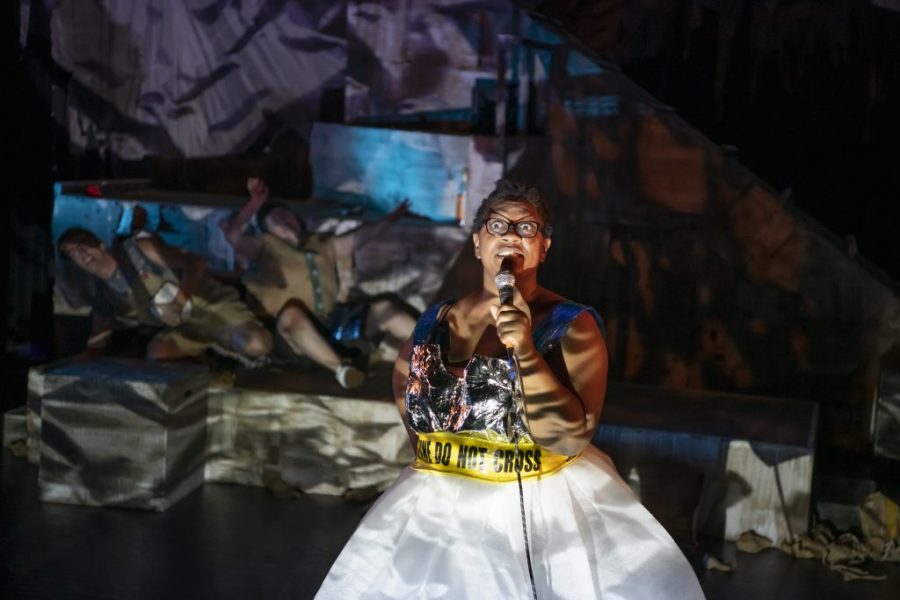 Long ago, in the “before times” (pre-COVID), there was a growing trend among our more cutting-edge companies: “devised” theater. Starting without roles or even a script, performing ensembles would be formed around a theme, or a central plot idea, and create a new story together. Some excellent productions appeared on local stages this way (notably from Submersive Productions and the Asian Pasifika Arts Collective), and it was a great way for companies to save on royalties. The folks at Single Carrot Theatre also planned one of these, a parable which imagines an eventual climate change apocalypse. Their 2020 project was interrupted (by that other apocalypse), but has finally found its feet this month at Baltimore Theatre Project.

…dazzling in its design, and performed with gigantic energy by a group of gifted, committed actors.

A kitschy collage of short scenes, “Kiss Me, Mr. Musk,” adds puppetry and video to some jaw-dropping design elements in a package that sings, rather than preaches. Director B Kleymeyer holds the reins, and the six actors who perform this Brechtian beauty pull inspiration from 20th century forms and today’s headlines. In it, the group tries to “orchestrate the Earth’s swan song,” and most of the result is dazzling.

“Musk” opens with a titular musical number, delightfully rendered by Meghan Stanton. Her come-on to the electrical Elon is followed by a verse which includes the line “Kiss me, Mr. Gates – don’t go Microsoft on me.” No seemingly-well-intentioned billionaire is spared. Stanton returns later, belting a brief medley that opens with “Fly Me to the Moon.” But this is not a musical. Most of the show consists of sketches that appear to have been developed out of long-form improv, and monologues written by individual performers. The plot arc shows what might happen next decade, or later today, when sea level rise caused by global warming floods coastal cities. There’s a heavy Baltimore lean here, but the concerns are universal. Characters range from worried humans to slowly decomposing detritus. Stanton and Cyd Cohn are hilarious as an old coffee mug and pen, fighting in a landfill. Parker Matthews shines, as an earnest Eastern Shore citizen who sincerely advocates for dredging to replenish beachfront lost to erosion. Elvis Karegeya plays a parent who struggles to apologize to their child on behalf of their entire generation. Ama Brown plays a junkyard refrigerator who has all the power except electricity. Kay De Léon is a resigned flood survivor who’s trapped on a house roof.

A lot of the post-disaster feelings and actions feel like they’re inspired by Anne Washburn’s wonderful play (also dystopian, and also “Mr.”), “Mister Burns, A Post-Electric Play.” The characters are far more focused on adaptation than on struggle. They talk about a new normal. When one of Karegeya’s characters says “I wanna find Elon Musk and cut him open and watch all his money fall out,” it’s with a sigh and a smile.

Punctuating these character bits are some lovely movement pieces. Sound Designer Heiko Speiker and Composer Danny Baird have created a truly incredible homage to Byrne and Eno’s “My Life in the Bush of Ghosts,” assembling chunks of interviews over a steady electronic bed. This section, near the end of the show, is completely riveting for its first five minutes (and would gain even more power if it were shortened to that length), as the cast wordlessly parade a series of lighted aquatic sculptures, such as a hubcap sea turtle. Another highlight of the show’s masterful sound underscores a movement piece with Emergency Broadcast System warnings and video that is dominated by the words GIVE UP and the tornado scene from “Wizard of Oz.”

Kolton Cotton is responsible for the video work, and it is every bit as breathtaking as the sound in this play. Much like the Carrots’ earlier “Is Edward Snowden Single?,” “Musk” incorporates a good deal of live camera work. Sometimes it’s projected, sometimes simply fed to the old-fashioned tube TVs that flank the stage. Visual trickery doesn’t end there, as a here-then-gone-then-back downstage scrim is used for silhouettes and shadow puppetry, a beach umbrella becomes a projection screen, and a mirrored disco ball symbolizes a mechanized coming to life.

Lighting by Helen Garcia-Alton is gorgeous, though it’s a bit hamstrung by the visual dominance of projections. Sierra Ho’s set is a great use of the Theatre Project space, filling the upstage scoop with white cycs and featuring a cardboard-clad multilevel platform. Costumes remind one of the Sleaze Sisters from 1980’s “Times Square,” with the ensemble completely clad in single-use plastics and other throwaway items.

A special mention is absolutely owed to actor Cohn, who also designed the puppets in the play. These feature very strongly, with a highlight being a basement scene in which a box of items from 1992 opens to find a conversation between a VCR and a flannel shirt (remember grunge?) The VCR describes a very dark “Cheers” finale, and the shirt haltingly explains that their owner might not return for them after all. Much of this tech is operated by the cast themselves (back to Brecht?) but don’t be fooled. The complexity and scale of this production require two stage managers for its execution and Makayla Beckles and Leiah Poindexter do great work keeping the ship afloat.

The piece could use a little trimming and had some technical issues on opening night (which will doubtless be corrected by the time this review appears), but it’s really, really dazzling in its design, and performed with gigantic energy by a group of gifted, committed actors.

Running time: One hour and 21 minutes with no intermission.

“Kiss Me, Mr. Musk” runs through September 11, 2022 at Theatre Project, 45 West Preston Street, Baltimore 21201. Tickets are available online. Patrons must provide proof of vaccination, and are required to remain masked.