Theatre Review: ‘My Son the Waiter: A Jewish Tragedy’ at Theater J 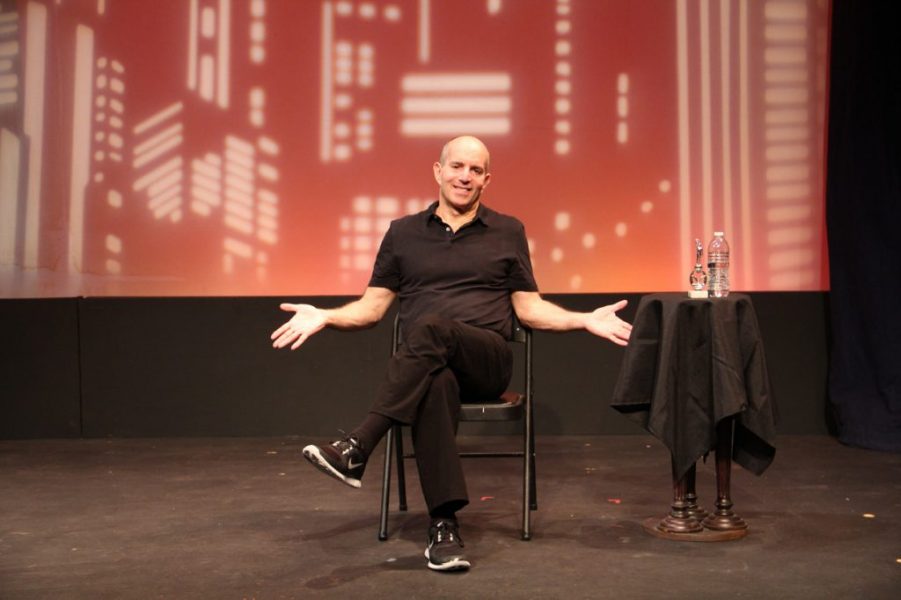 Paul Zimmerman in “My Son the Waiter: A Jewish Tragedy.” Photo courtesy of Theater J.

Framed by an open stage and wearing all-black clothing, Brad Zimmerman maneuvers around his simple set of a chair and a table beset with a single rose in a vase and a childhood sports trophy. With the house fully lit, Zimmerman delivers his 80+ minute show “My Son the Waiter: A Jewish Tragedy,” a part stand-up, part theatre show recounting the ups, downs, and lengthy plateaus of his life.

Zimmerman has lived the NYC actor experience, not by being on Broadway or becoming instantly renowned, but by waiting tables—for 29 years. Zimmerman opens the show with one-liner jokes, some directed to specific audience members. Seated with my notepad and pen, I couldn’t help but jump when I was called out with a sardonic “If you’re writing a review, you better have written something good about that joke.”

Some jokes landed well—bits about airplane food, his love life, Jewish mothers, families, and waiter horror stories. Others were a tad dated, making digs at supermodels and reality TV contestants. Zimmerman discusses at length the regrets he has in his life, wishing he had been more proactive in pursuing his dreams instead of hoping opportunity would come to him. He even remarks at one point, “I don’t really live life. I tolerate it.” Thus, many of his criticisms of successes in other branches of the art field come across as bitter rather than funny. Not to mention, the show concludes with a self-congratulatory string of name-dropping that takes the audience out of the moment.

Despite these caveats, Zimmerman comes near to tears as he recounts the support his father showed him throughout his life, and how his biggest regret is that his dad didn’t get to see him realize his dream of becoming a true performer. This paired with a tearful, “I love my mom,” creates a moving moment that softens the hyper-critical performer and allows the audience to peer into his true psyche.

Overall, Zimmerman’s classic Borscht Belt humor delights the audience. Weaving the tale of his life, viewers can’t help but wonder life’s unanswerable question—what comes next? For now, however, Zimmerman has his feet firmly placed on the stage and won’t be going anywhere anytime soon.