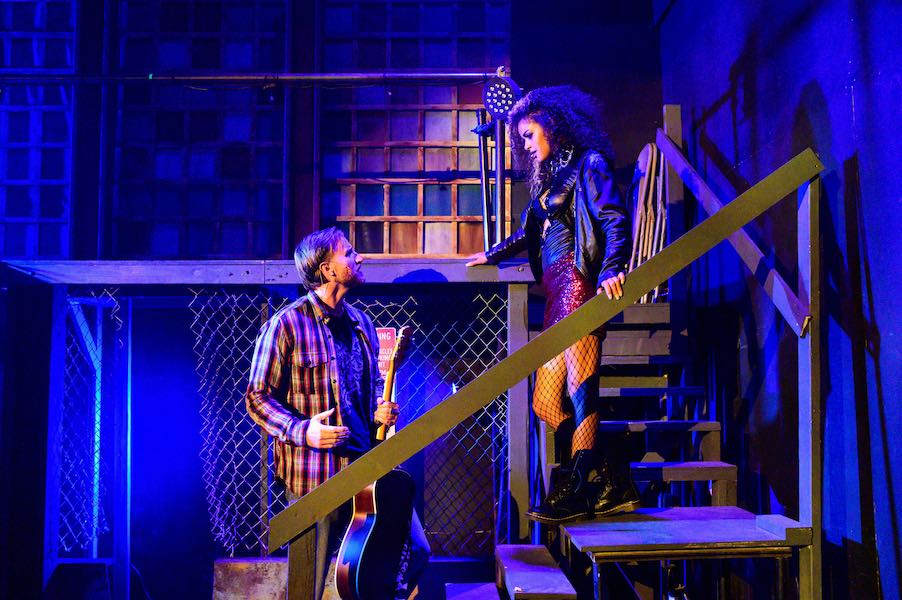 Greg Twomey as Roger and Caelyn Williams as Mimi in “Rent.” Photo by Kelli Finch.

Even when life throws us obstacles and tears us down, somehow we’re able to find those moments that make life worth living and keep us pushing on. ArtsCentric’s production of “Rent” is a reflection of that part of humanity in all of us and reminds us that there is “no day but today” to make the most of what we have.

Although it has been done countless times before, this is undoubtedly one of the best productions of “Rent” you will see.

“Rent” first premiered off-Broadway and on Broadway in 1996, eventually becoming one of Broadway’s longest running shows. The rock musical, by Jonathan Larson, is loosely based on the 1896 opera, “La Bohème” by Giacomo Puccini. It centers around a group of struggling, young artists in the East Village of Manhattan over the course of a year, from Christmas 1989 to Christmas 1990, as they grapple with life, love, and addiction all during the height of the HIV/AIDS epidemic.

Directed by Kevin S. McAllister, with music supervision by Cedric D. Lyles and musical direction by JoyAnne Richardson and Jae Anthonee, ArtsCentric set out to make a highly immersive production of “Rent” and they definitely succeeded. The tennis court stage with the audience on either side gave an up-close-and-personal feeling to the interaction, such as giving an audience member the cowbell to hold during “Over the Moon” (of which I had the privilege) or asking the audience to get up and dance during “La Vie Boheme.” This production was an open invitation to join their community and to be part of the story. By having the audience to join them, it echoes moments in the show where characters ask each other to join with them, stand with them, or be with them. This is also reflected in their unique staging choice for “Seasons of Love,” one of the most famous songs from the show. Traditionally staged with the characters in a line singing to the audience, this production made it part of the story as everyone worked together to clean up the streets of their neighborhood.

One of the most creative design elements was the use of projections, designed by Zavier Taylor, throughout the whole show. Complementary footage was shown during transitions, or even during scenes, and set against both sides of the stage. It was even used to show footage from Mark’s documentary that he is working on during the show. The projections were also used hand-in-hand with the lightning design by Tyrell Stanley to effectively establish place, time of day, and mood.

The set design by Simean Carpenter brought the gritty world of late 80s/early 90s New York to life with attention to detail and clever use of space. It provided for a variety of play areas that kept the direction fresh, interesting, and dynamic. Costume designer Deana Cruz-Conner highlighted the unique personalities of each character. The most eye-catching were Angel’s vibrant and glamorous looks with high heels that must have been a feat to walk in, but I appreciated the clear thought that was even put into every ensemble outfit. Each one told a whole story on its own, adding to the layers and complexities of the community.

The ensemble was one of the highlights of this production. I could see their hard work and how they helped to flesh out the story. When everyone on stage was singing, it was powerful and their sound echoed through the theater. Set to choreography by Shalyce “Shea” Hemby and assistant Antonio Beverly, their moves captivated the audience and elevated the music. But on top of all of that, the fun they were having and their enjoyment on stage were infectious.

The cast was as top-notch as one could hope. Everyone sounded incredible and had great chemistry together, feeling less as though they were acting the parts and more like they were living them. Amber Wood’s Maureen demands attention and is flirtatious with everyone—even the audience. She and Anitra McKinney as Joanne were electric on stage together, especially during their act two duet, “Take Me or Leave Me,” which is undeniably one of the best numbers in this production. You will be in awe of their talent throughout the whole song. Another shoutout goes to David Singleton as Angel, the heart of the show, who will have you laughing, smiling, falling in love, and tearing up before the show is over.

Although it has been done countless times before, this is undoubtedly one of the best productions of “Rent” you will see. The cast is spectacular, the set is immersive, the costumes are dazzling and real, and the whole team brings their best to the table. It has all the heart, emotion, and truth you could ask for from this iconic show and it made it easy to connect to these characters and their struggles, even over thirty years past their time.