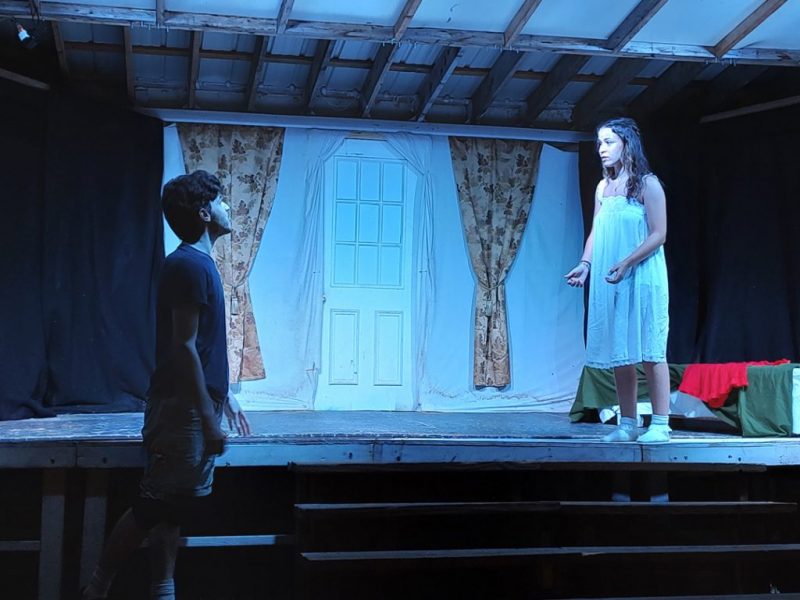 Daniel Rosen as Romeo and Sophie Jacobson as Juliet. Photo by Mandy Gunther.

The summer of 2022 has been a time to reconnect with live theatre, and especially live, community theatre. This year, The Bard’s Wagon Players returned to Reisterstown and Catonsville with a fresh production of Shakespeare’s “Romeo and Juliet.” It was directed by Nathan Rosen, someone who clearly knows their way around the play and the language.

“Romeo and Juliet” has suffered from a lot of dumbed-down film versions that wipe out entire plot lines, perpetuating the myth that the play is all about the young couple. What Shakespeare is at pains to show is how their relationship is doomed not by their love for each other, but by the community around and against them. If it isn’t the hot-headed street thugs, with nothing better to do than engage in pointless turf battles, it’s the adults who give these punks free rein, while the local constabulary struggles to keep the peace.

…so good to see people treading the boards once again…I hope to see The Bard’s Wagon Players back up and running next year!

One of the great strengths of Rosen’s work here is the way he foregrounds the meddling—both well-intentioned and otherwise—that makes it impossible for a Montague boy and a Capulet girl to live happily ever after. There are clear signs, in fact, that a Romeo and Juliet match would not have been such a big deal after all. It was hot-headed gangs, the mere assumption of animosity, as well as the insistence on secrecy, that ultimately doomed them.

Street fights aside, it is the grown-ups here who think they’re acting in the kids’ best interests, but who end up making things irreparably worse. Juliet’s Nurse arranges a hook-up (and a quickie marriage, actually), only to disavow her role in it when the going gets rough. Meanwhile Friar Lawrence, clearly sympathetic, not only arranges a secret marriage, but is the brains behind the plot to stage Juliet’s fake death, so she can skip town with her beau.

Shakespeare makes a point of complicating this plot and the characters’ situations, tying what looks like a simple love story into knots. No sooner has Romeo gotten secretly married to Juliet, than he is sentenced to exile in Mantua for murder. Juliet is promised to another rich kid in town, facing the prospect of bigamy, but can’t begin explain the problem to her overbearing parents.

Meanwhile Friar Laurence’s ingenious plot, involving rare, semi-poisonous herbs (monasteries doubled as pharmacies back in the day), falls apart. Lines of communication, once solid, fray and snap apart, with the inevitable result of a blood-bath at the Capulet family mausoleum. As a character once remarked elsewhere: “What we have here is your basic failure to communicate.”

Fortunately for the audience, director Nathan Rosen makes sure we can follow the intricate, original plot line. It is helped immeasurably by some stand-out performances, beginning with Daniel Rosen and Sophie Jacobson in the title roles. Daniel Rosen gives us a Romeo who is a bundle of nerves and a mass of contradictions, constantly vacillating between melancholy and love and between peace-making and murder. Jacobson does a great job navigating the treacherous family politics of the Capulet household She does this in, perhaps, her best scene, when she has to tell her parents one thing, while in the same breath, making it crystal clear to the audience what she’s really thinking.

Hot-headed youth gets its due here as well with Nick Thompson’s fiery Tybalt, burning through any hint of peace between the orders, and Wes Dennis taking a fine turn as Romeo’s BFF, Mercutio. (As Benvolio, the hapless mentor, Jen Sizer does a great job of losing control over everything, no matter what.

Sean Eustis and Erin Klarner are solid as the Capulet couple, making their grand entrance in their team colors (sweat shirts emblazoned with the immortal, red “C” of the Montreal Canadiens—fitting, given hockey’s reputation for pointless fights. A blue, Maple Leaf jersey for the Montague team would not have been out of place here). Liana Olear has a great deal of fun as Juliet’s Nurse, blathering away when everyone around her wishes she’d just get to the point (as if there were any). Nathan Rosen plays the Montague patriarch well, coming into his own in the final scene.

It is B. Thomas Rinaldi, as Friar Laurence, who anchors the show, delivering the opening monologue (“Two households, both alike in dignity…”) and making it completely transparent it is the Friar’s actions that frame much of the action here, tragic and otherwise. His command of the language, too, renders his thoughts unambiguous, even in the trickiest of situations. Because Rosen is not one to ‘cut to the chase’ and instead includes as much as possible, we’re able to see, step by step, how the Friar’s best laid plans lead directly to disaster.

Outdoor summer productions like this are always at the mercy of the elements—heat waves and flash thunderstorms can wreak havoc. But it’s so good to see people treading the boards once again, and I hope to see The Bard’s Wagon Players back up and running next year!