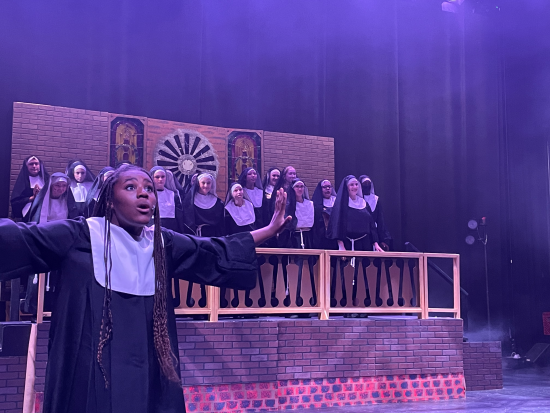 With an audience of mostly family and friends, “Sister Act,” presented by the Columbia Center for Theatrical Arts (CCTA), opened this week in the Smith Theatre at Howard Community College. The musical is based on the movie written by Joseph Howard and starring Whoopi Goldberg in the lead role.

“Sister Act” ran on Broadway in 2011 after the original London production in 2009.It was nominated for five Tony Awards, including Best Musical. The music is by Alan Menken with lyrics by Glenn Slater, and book by Cheri Steinkellner and Bill Steinkellner (with additional book material by Douglas Carter Beane.)

The plot follows Deloris Van Cartier (Grace Pressley), a would-be nightclub performer in Philadelphia.  When she witnesses a murder, her friend Eddie (Owen Landle), a police detective, hides her in the Queen of Angels Church—which is also the residence of an order of nuns. The Mother Superior (Mae Guerrasio) is not too happy to have Deloris living there. Mayhem ensues along with conflicts between the Mother Superior and Deloris, especially when the latter tries to turn the nun’s choir into a hipper, musical group.

The whole cast is between the ages of 12-17. CCTA is a non-profit theatrical group for young adults and children that reaches out into the community. It teaches and trains future performers as well as opening up the theatre experience to the youth in the community.

Pressley, who is in her teens, plays brash Delores. She has the voice and stage presence to capture the essence of her talented and witty character, whether she is training her fellow “sisters” in the song “Raise Your Voice” or in the number, “Sister Act,” when the chanteuse realizes her close bond with the nuns. Guerrasio, who has been training her voice at the Baltimore School for the Arts, gives a polished performance. She shines like a rising star in “I Haven’t Got a Prayer,” a song where the Mother Superior complains to God.

Giving knock-out performances in supporting roles include John Fonmboh, menacing as the gangster Curtis in “Where can I Find My Baby;” as the insecure detective, Landle rocks the house in “I Could be That Guy;” and Keira Hase as Sister Mary Robert, a novitiate expressing her doubts in “The Life I Never Led,” is another young talent and just a sophomore. Will Leovy’s Monsignor O’Hara is quite funny and memorable.

The show also features some other up-and-coming performers. CJ Fonmboh (TJ), Siena Lemke (Joey), and Parker Strickland (Pablo) play Curtis’ henchman and shine in “Lady in the Long Black Dress.” Jenna Reaves and Olivia Chapman are impressive as Deloris’ backup singers, Michelle and Tina, in “Take Me to Heaven.” Then there are the Sisters—Julia Purdy as Sister Mary Patrick; Addie Hasseltine as Sister Mary Lazarus; Jordan Bentivenga as Sister Mary Martin-of-tours; and Tess Silverman as Sister Mary Theresa. The Ensemble includes Arianna Edinbugh, Cara Aument, Isabel Sowry, Julia Chapman, Katie Hollenbeck, Leah Freeman, Mila Conti, Octavia Fonmboh, Penelope Roesler, Riley Jackson, Sophia Dadds, Tressie West, Siena Bammel, and Kit Keran. It is their numbers with Deloris’ that make you want to tap your feet and brings a smile to your face, including “Raise Your Voice,” “Take Me to Heaven” and “Spread Your Love Around.” Tyler Sowry delightfully plays Ernie, Pope Paul VI, and others.

The work by co-directors Brynn Williams and Gerald Jordan is highly commendable. It is hard enough with such a large cast but managing a group this young and having the show turn out so well is a feather in their caps. They also did an exceptional job as the choreographers.

This show is connected with Toby Orenstein who is the founder and artistic director of CCTA as well as Toby’s Dinner Theatre. Therefore, it is not surprising to see such wonderful costumes designed by Carrie Seidman and Cedric White; classy scenic, sound and light design by Corey Brown, and live music under the music director, Laura Van Duzer. As the stage manager, Gavin Willard makes sure all those young performers are in place and on time.

This production of “Sister Act” is joyful and uplifting.

“Sister Act” runs through August 13, 2022, presented by the Columbia Center for Theatrical Arts at the Smith Theatre, Horowitz Visual and Performing Center of the Arts, Howard Community College, 10901 Little Patuxent Parkway, Columbia, MD 21044. For tickets go to this link.  For more information on this and upcoming performances, go to the CCTA website.