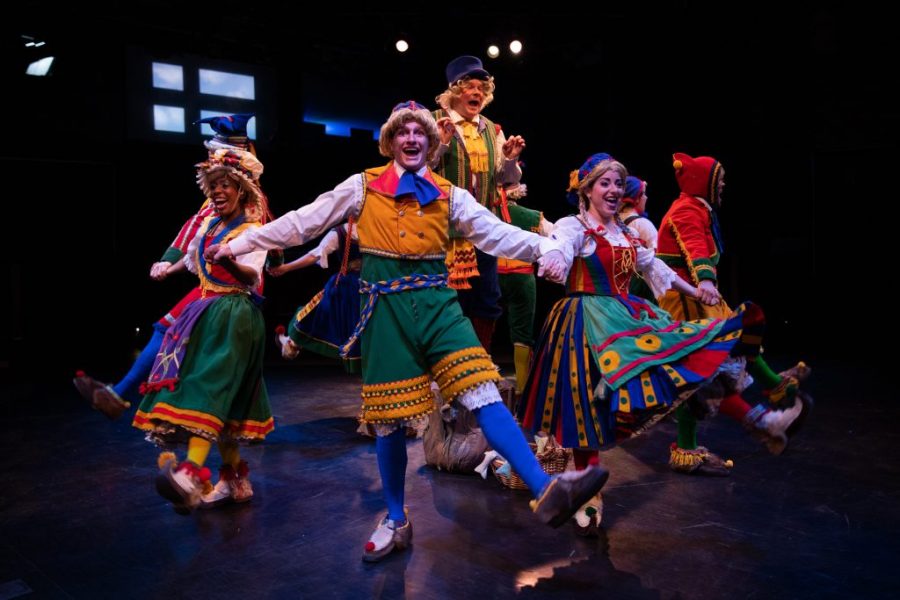 The cast of “Spamalot” briefly mistaking the setting of the show as Finland, not England. Photography by Jeri Tidwell.

“You don’t need to know about Monty Python to enjoy the show,” director and choreographer Mark Minnick tells us. “Monty Python’s Spamalot’ is fun on its own.” This is likely true, but aficionados of the British comedy troupe and their 1974 film “Monty Python and the Holy Grail” will find this production a special treat. This show is filled with the silliness of Monty Python-style humor.

The casting is excellent…very entertaining…

The show, as well as the movie upon which it is based, is a satire of King Arthur, the Knights of the Round Table, and the quest for the Holy Grail. There are significant differences between the show and the film. One example is “Spamalot” opens with a flashy number, the kookily titled “Fisch Schlapping Song,” with performers in over-the-top Finnish and Germanic costumes. The cast is then reminded by a killjoy historian they are in England, not Finland. The gag is quite funny, colorful, and playful.

Other such moments arise in the unexpected use of other songs and tropes drawn from the Monty Python, but in new and unexpected contexts. The catchy tune “Always Look on the Bright Side of Life,” for instance, in which Patsy (Joey Ellinghaus) is trying to cheer up King Arthur (Jordan B. Stocksdale) and his knights, is far removed from the song’s edgy context in Monty Python’s “Life of Brian” film.

The spam of the title refers ultimately to the well-known pre-packed meat product, which consumers sometimes joke about due to its slightly varying sausage-like consistency and ingredients. “Spamalot” is similar in that it self-consciously draws from a variety of classic Broadway and Hollywood songs. For example, “Run Away” cleverly samples Jacques Offenbach’s “Can-Can.” Indeed, throughout the show there are, so to speak, “spam” reproductions of bits of American musical theatre fare, including the lyrics to “People” from “Funny Girl;” the musical intro to “America” from “West Side Story;” a leitmotif from Disney’s “The Little Mermaid;” and twirling yellow umbrellas which seem to have blown in from the MGM musical “Singin’ in the Rain.”

The casting is excellent, if at times unexpected. In a Monty Python-like turn, actors which initially seem slightly miscast seem to grow into their unlikely roles to excellent effect. Jordan B. Stocksdale does well as King Arthur, the put-upon straight man surrounded by comic chaos. Jeffery Shankle comes to shine as the flamboyant dancing Sir Robin. Janine Sunday, as the Lady of the Lake, displays a powerful voice, especially in her song “The Diva’s Lament.” Especially noteworthy is Joey Ellinghaus as Patsy, King Arthur’s faithful companion and wielder of coconuts. He is especially funny, serving up wry comments with superb comic timing. The Ensemble is also uniformly excellent in song, dance, and supporting activities.

The costume coordination designed by Marianne VanStee and Janine Sunday of plain-colored knight costumes and armor contrasts well with the colorful costumes used in elaborate dance numbers. This was especially effective in the standout Broadway-themed routine, “Knights of the Round Table,” with jazz, scat singing and superb dance routines choreographed by Mr. Minnick and showcasing the vocal talents of “Lady of the Lake” Sunday.

Featuring a live orchestra, the show presents an interesting mix of musical styles as well as a mélange of medieval traditions brought in for Python satire. Humorous parodies of medieval legends which the historian narrates abound, including “King Arthur and his Knights fleeing for their lives” (as does the “brave” Sir Robin). Slapstick and the Toby’s theatre-in-the-round minimalist approach make these classic sketches work especially well. Lighting effects, designed by Lynn Joslin, are used with great effectiveness to suggest different settings, locations, and, at key moments, a “bright lights” of Broadway feel.

In the spirit of the show, alliterative names are given to the food at the dinner theatre—
Camelot’s Corn, Excalibur’s Scalloped Potatoes, and Patsy’s Pasta. We were a bit surprised there was no spam at the buffet.

The show is a very entertaining, live staging of key Monty Python skits, with loving tributes to the Broadway tradition and allusions to great musicals of the past. We do think the Monty Python fan will appreciate some of the inside jokes (the killer rabbit, for instance) more than those experiencing Python zaniness for the first time, but there is much fun here for all audiences.