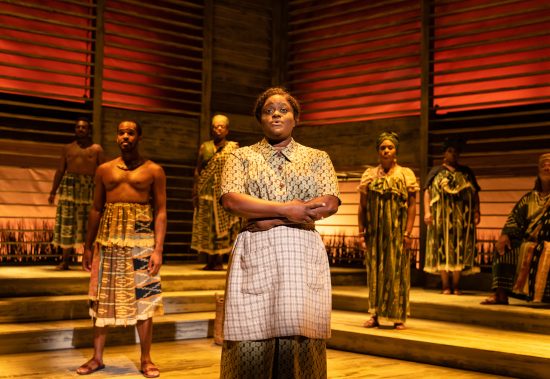 Nova Y. Payton (Celie) and the cast of “The Color Purple” at Signature Theatre. Photo by Christopher Muelle.

Alice Walker’s pulitzer-prize-winning epistolary novel, The Color Purple, has touched millions since its 1983 publication. Furthered by Steven Spielberg’s 1985 film adaptation, which starred an early-career Whoopi Goldburg and a pre-fame Oprah Winfrey, the cultural impact is undeniable. The original Broadway production ran for three years, earning eleven Tony Award nominations in 2006. The acclaimed Broadway revival won two 2016 Tony Awards, including Best Revival of a Musical. A musical rendition might seem ill-suited for this dark and somber story of a black woman in the Jim Crow South—one whose suffering seems to eclipse even the biblical Job’s. Yet, Signature Theatre’s production of “The Color Purple” soars on a soulful blues and jazz score carried by a jaw-dropping cast.

…a pitch-perfect production of a beloved musical. A stellar cast carries the breathtaking score proudly and breathes new life into the well-loved story…

Raped, beaten, and demeaned from childhood, Celie (Nova Y. Payton) spends much of her life with her head hung low, praying to God for answers and dreaming of the release of heaven where she hopes to reunite her with her sister, Nettie (Kaiyla). While she heeds every beck and call of her cruel husband Mister (Torrey Linder), she admires the spirited Sofia (Frenchie Davis), who’ll beat any man who dares hit her. When Mister’s old flame, Shug Avery (Danielle J. Summons), comes to town, new feelings awaken in Celie, transforming how she sees the world. The borderline-melodramatic plot of empowerment, redemption, and overcoming may feel a bit predictable or overwrought at times, but the songs sweep through the many twists and turns with grace and beauty.

Early on, the ensemble proves their talent in the forceful opening number, “Mysterious Ways.” In contrast, Celie’s first solo, the thin but sweet “Somebody’s Gonna Love You”, disguises the range of Payton’s voice—a power that comes out in full force for the 11 o’clock number, “I’m Here.” The score by Brenda Russell, Allee Willis, and Stephen Bray brims with showstoppers, including Sophia’s thunderous “Hell No!”, Shug Avery’s sensuous “Push Da Button,” and the menacing “Mister’s Song” (also known as “Celie’s Curse”).

If this production were stripped down to just a concert, the music alone would still be worth attending (and then the theatre would have no need to dial down the occasionally painful decibel levels). The dialogue interludes that help usher us from scene to scene and song to song are forgivably clunky. After all, playwright Marsha Norman had the unenvious task of condensing a 300-page novel into just two and a half hours onstage.

Although it could stand on its music alone, Signature’s production doesn’t have to, thanks to praiseworthy direction by Timothy Douglas, choreography, and technical design. Dane Figueroa Edidi’s choreography smoothly blends with the mood and rhythm of the music, shining most in the lively jukejoint number and the Act 2 opener “African Homeland.” Costuming by Kara Harmonx runs the gamut from the simple but sturdy dresses young Celie, Nettie, and Sophia wear to the sumptuous, flapper outfits of Shug Avery. Period-appropriate wigs and hair design by J. Jared Janas complete the looks.

The set, designed by Tony Cisek, reflects the harsh conditions in which Celie lives. A wizened tree crawls up the wood-paneled wall at the edge of the stage. Gray, weathered floors creak when she first walks across them to pick up a purple flower resting at center stage. But this cold, barren space holds secrets. The wall panels open, revealing behind them dreams, specters, or even—in warm red light and grassy paths—Africa. Slamming closed, the panels can become a grim prison cell, with austere lighting and echoing voices from Peter Maradudin and Ryan Hickey’s respective lighting and sound design. The intimate theatre and stark stage allows the moments of beauty and joy to shine all the brighter.

Once again, Signature Theatre has proven its caliber with a pitch-perfect production of a beloved musical. A stellar cast carries the breathtaking score proudly and breathes new life into the well-loved story of a black woman’s triumph over adversity. Getting a ticket to “The Color Purple” should be a high priority for any lovers of musical theatre, R&B, or the source material.

Runtime: Two hours and 30 minutes with a 15 minute intermission.

“The Color Purple” runs through October 9, 2022 at Signature Theatre, 4200 Campbell Ave., Arlington, VA 22206. Tickets may be purchased online. Signature requires all persons in the theater to wear a mask at all times at live public performances and events except while eating or drinking. for more information, click here.