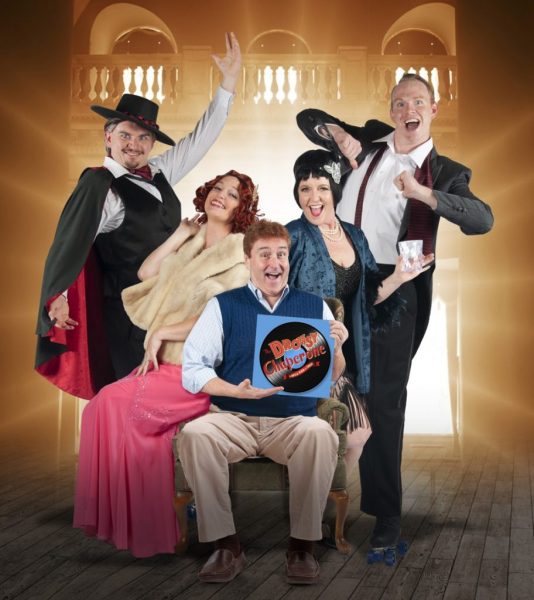 The cast of “The Drowsy Chaperone.” Photo courtesy of Annapolis Summer Garden Theatre.

Directed by Jason Vellon, “The Drowsy Chaperone” is a stunning outdoor production at Annapolis Summer Garden Theatre. It is both a satire and a celebration of 1920s musicals. Part of the fun of the show is deciding which parts are satirical and which should be taken more literally, keeping the audience both engaged and on its toes as it enjoys the mix of physical and visual comedy.

The musical focuses on a modern-day fan of musical comedies of yesteryear. Known only as “Man in Chair,” he is playing a 1928 recording of an obscure and fictional musical called “The Drowsy Chaperone.” As he listens alone in his dingy apartment, the overture transitions from the audience hearing a low-fidelity record on his old hi-fi to a live orchestra, transporting us into the world of Man in Chair’s imagination as a play-within-a-play. In the case of the interior play of “The Drowsy Chaperone,” this is a story about a bride who must be chaperoned so that she does not see the groom before her wedding day. As one might imagine, the chaperone is often drowsy (alternately meaning sleepy, tipsy, and eccentric), resulting in a multitude of comic events.

Man in Chair’s favorite character is the Drowsy (remember, tipsy) Chaperone, portrayed by Traci Denhardt, who is highly charismatic with a striking voice, especially in her featured  piece, “As We Stumble Along.” She is paired with Adolpho, a Latin lover stereotype, played by Josh Mooney in a tour-de-force performance.

Bride-to-be Janet Van De Graff (Kaitlin Arnold) wishes to exchange her life of glamour and stardom for domesticity, marrying one Robert Martin (Kyle Eshom). The actress positively shines as Janet. She displays a wonderful vocal range and vivacious dancing, especially in her song “Show Off,” even as her actions and demeanor seemingly undercut the character’s claim to want to “leave it all behind.” Mr. Eshom provides a perfect balance with his Robert, singing and tap-dancing “Cold Feet.” He also shows great athletic prowess in an impressive number in “An Accident Waiting to Happen,” roller-skating on the stage while blindfolded.

This production features a live orchestra playing 1920s music. Many dances are in the period style of the Charlestown, and there is ubiquitous wit. At the same time, “The Drowsy Chaperone” offers much food for thought. Is the musical we are seeing supposed to be an authentic reproduction of the fictional 1928 musical? The narrator admits to never having seen it, only knowing it through vintage recordings. So how much is the imagination of Man in Chair influencing the presentation of the musical? This question is brought home when there is a distortion in the master of the Man in Chair’s recording which renders a key line of dialogue inaudible, causing the narrator to muse for a serious moment on the ephemeral nature of love and relationships.

The musical quality is excellent with a superb live orchestra. The music itself is engaging with unexpected depths in its complex arrangements. The choreography by Lindsay Zetter is outstanding with a number of intricate musical numbers including tap dancing, the tango, and, of course, the Charleston. The final production number, which features an ongoing melody interspersed with pieces from each character’s signature song, is very impressive as well.

The staging is simple but highly effective. While there is a wonderful set of a 1920s airplane piloted by “Trix the Aviatrix” (an exuberant Ellen Quay), for the most part there are no sets other than 1920s-style costumes and the occasional prop, such as a luxury 1920s telephone. The strength of the production is illustrated by eschewing elaborate settings and relying on fine acting and a live orchestra (conducted brilliantly by pianist Ken Kimble) which allows the audience to imagine a full-fledged Broadway show in the narrator’s less-than-luxurious apartment. Indeed, one of the charms of the show is its cheerful 1920s-era musical comedy, leavened with occasional, serious interludes.

The atmosphere of the surroundings of a summer’s evening in historic Annapolis also adds greatly to this forward-looking piece that waxes nostalgic about a wonderful era in American musical theatre. If you are fortunate, you may see the cast’s wonderful ability with ad libs when an occasional car horn or shout intrudes from outside the open-air theatre. The venue is right across the street from the Annapolis Harbor which makes for pleasant moments to spend time during the intermission or before or after the performance.