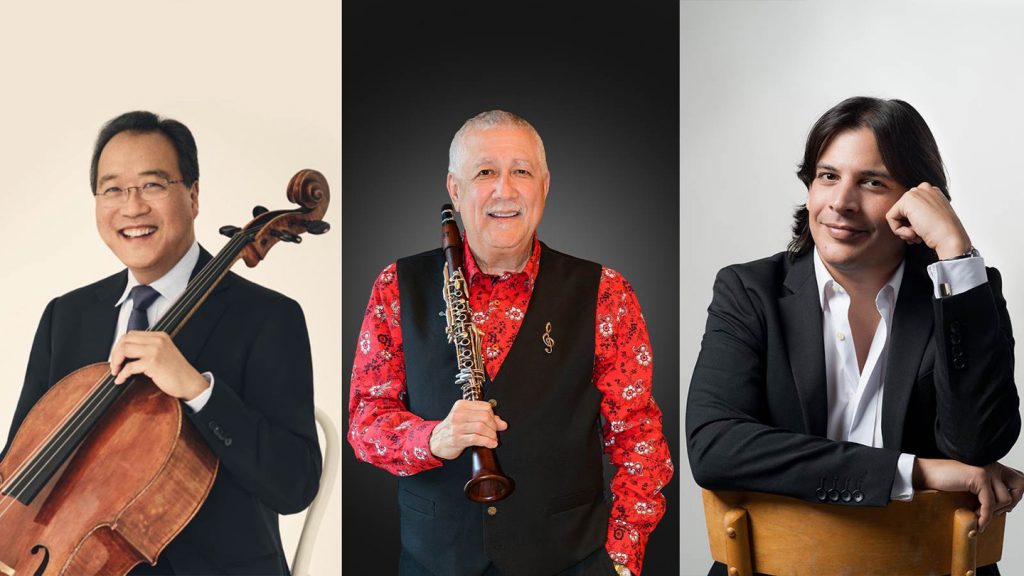 A bustling, happy crowd buzzed around Wolf Trap’s open air Filene Center Thursday night. Conversations swelled and quieted, mixing with the sounds of tuning instruments and chirping crickets. The crowd encompassed all ages—even toddlers were seated with their families out on the lawn. The applause started early, reminiscent of rain as it echoed through the space.

…the night was transfixing. The NSO layered sound beautifully, Ma, D’Rivera, and Yang infused their energy into every note, and Gomez connected the audience to the depth of the music…a brilliant program.

We were there to see the inimitable Yo-Yo Ma and Paquito D’Rivera, accompanied by the National Symphony Orchestra (NSO). Ma, the world-famous cellist whose past awards include the Presidential Medal of Freedom and the Kennedy Center Honors, and D’Rivera, the superstar Cuban clarinetist and composer awarded lifetime achievements such as the Kennedy Center Living Jazz Legend Award, have over 30 Grammy and Latin Grammy awards between them. That is to say, they are near impossible to “review.” Joining them to conduct the NSO was José Luis Gomez, a critically-acclaimed conductor who has worked with numerous orchestras in the Americas, Europe, Australia, and Asia and is currently the Musical Director of the Tucson Symphony Orchestra.

The evening centered on The Journey, a piece co-commissioned by Wolf Trap Foundation for the Performing Arts and the NSO. Other pieces included D’Rivera’s “The Elephant and the Clown,” Gershwin’s “Cuban Overture,” Arturo Márquez’s Danzón No. 2, and excerpts from Bernstein’s West Side Story. Gomez described the evening as “Latin influenced” and D’Rivera noted it was fitting that his music, inspired in part by childhood memories, was being performed on the feast day of Cuba’s patron saint.

The entire program was excellent and deserved all three of the standing ovations it received. “The Elephant and the Clown” began playfully and seemed to engulf the audience. Many NSO musicians appeared to dance along with their instruments. Then Ma, D’Rivera, and erhu musician, Cathy Yang, joined the orchestra for “The Journey” concerto, their fingers blurring as they flew through the notes.

As can be surmised by the event title, the concerto carried the program. D’Rivera began by giving some background on the creation of the piece, riffing with Ma about their past work together and the serendipities that led them to that moment. The concerto was a mix of Latin and Asian influences with the unique sound of Yang’s erhu (a Chinese two-stringed, bowed spike fiddle) floating above the other instruments. The notes fromthe instruments of D’Rivera, Ma, and Yang were echoed back by the rest of the orchestra, creating a continuous wave. At times the audience tapped their feet along, while at other points a stillness seemed to descend. It was joyful and mournful and transcendent.

The audience reception of “The Journey” prompted an encore, a beautiful piece inspired by Cuban dance. D’Rivera, Ma, and Yang were joined by percussionist Samuel Torres and pianist Alex Brown for a moving close to the first half of the program. Following intermission, the audience was treated to a spectacular finish of “Cuban Overture,” showcasing the clean breaks and clear sound for which NSO is known. Then Danzón No. 2 brought, as Gomez put it, Cuban dance interpreted through a Mexican musical lens.

Finally, NSO closed with the Symphonic Dances from “West Side Story.” As a treat for the musical theatre lovers in the audience, NSO musicians added snaps and yells of “Mambo!” where appropriate throughout the medley. Judging by the chuckles from the crowd, this extra reference to the source material was appreciated. Unlike the night’s other pieces, the Symphonic Dances dragged a bit with more repetition and less of the dynamism from earlier in the evening. However, that is something I would likely have to take up with Bernstein himself. The NSO performance of the piece was skillfully done.

Overall, the night was transfixing. The NSO layered sound beautifully, Ma, D’Rivera, and Yang infused their energy into every note, and Gomez connected the audience to the depth of the music. I have found that my favorite classical music moves so smoothly through the piece that you suddenly wonder when you began listening to something very different than how it began. Every performance was so engaging that I was swept along with it and the evening ended before I knew it. I cannot think of a better sign of a brilliant program.