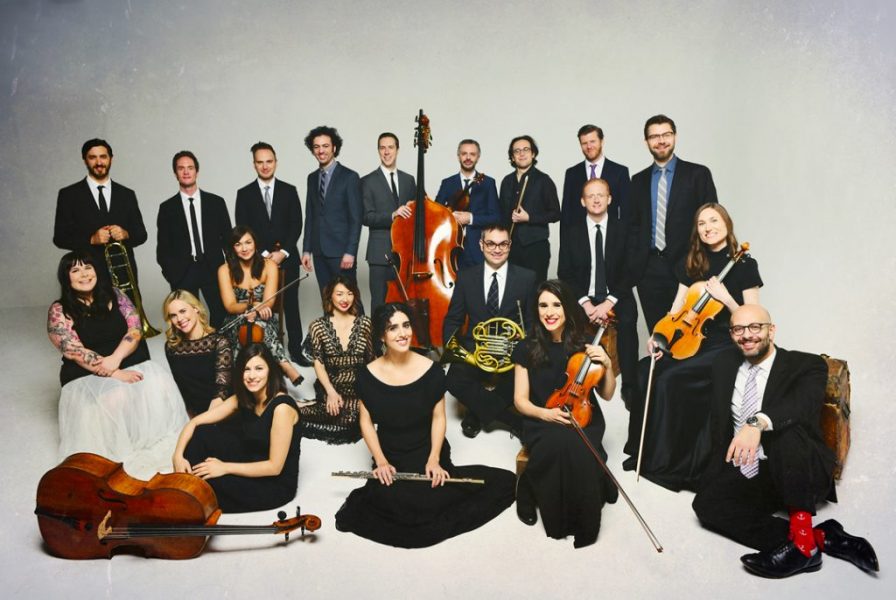 Candlelight Concert Society began their 50th Anniversary season with a splash. The Knights Chamber Orchestra, with Eric Jacobsen conducting, drew several standing ovations for their performance this past Sunday.

The Knights Chamber Orchestra—which is comprised of about a dozen string instruments, four woodwinds, three brass horns, a harpist, and a percussionist—began the afternoon with the premiere of “Afterglow” which CCS commissioned to celebrate its 50th Anniversary. The piece was written by Viet Cuong who has ties to our local area (Peabody Conservatory). Cuong was in the theatre for the performance and brought up to speak before the premiere of his piece. He explained he was inspired by the twilight at a visit to the Grand Canyon and the death of his father. There are reoccurring themes to reflect Cuong’s own feelings that nothing really goes away. The twilight lingers, and when it disappears, the sun rises again in the morning. I could hear those recurrent themes. The melodies emerged and each had its own echo as the composer had promised.

There was plenty of reasons to raise a glass of champagne after the show to welcome in this season of Candlelight Concert Society. This looks like the start of another memorable season for the group.

The performance switched to music from the Kreutzer Project. This is a program run by group which include Beethoven’s “Kreutzer Concerto” (arrangement of Violin Sonata No. 9, OP. 47); Leoš Janáček’s “Kreutzer Sonata,” inspired by both Beethoven and the Tolstoy novel of the same name; Anne Clyne’s “Shorthand” which ties the two works together. It also includes a traditional piece, “A Shadow Under Every Light,” which arranger Colin Jacobsen put together from six field recordings he discovered by Janáček and Bartók.

C. Jacobsen arranged the concerto and sonata as well. He is also the concert master, and for the Beethoven Concerto, he took the front of the stage. The Beethoven piece was fast and lively with bows flying across the strings. In “III. Finale, Presto,” I envisioned galloping horses thundering across a field.  The music was truly reflective of Beethoven—intense, fiery, and very Germanic. It was so intense that Jacobson broke a string about half way through the second section. He was playing so powerfully, I was surprised he didn’t break more strings.

After intermission, The Knights played Anne Clyne’s piece which was written for their cellist Karen Ouzounian. It allowed us to see Ouzounian’s passion for her instrument as she captured the Eastern European flavors of this work.

When Janáček wrote “Kreutzer Sonata,” he had read Tolstoy’s novella. The composer was also in love with a younger woman. He wanted to convey the fieriness of Beethoven to the listener as internalized by Tolstoy in his writing. Janáček’s work was softer and reflected his eastern European roots. The piece, as arranged by Eric Jacobson and orchestrated by Michael P. Atkinson, still stressed the string sections. Though it had some fire, it was not as strong sounding as Beethoven’s work. It was a fine contrast.

The concert ended with “A Shadow Under Every Light.” Again, C. Jacobsen took the front of the stage with his violin. After his solo, the other strings slowly in came in, followed by the woodwinds, and then the brass and percussion. There was even a short injection after the solo of some of the original tapes.  The piece had the feel of the Slovik countryside and traditional eastern European music.

There was plenty of reasons to raise a glass of champagne after the show to welcome in this season of Candlelight Concert Society. This looks like the start of another memorable season for the group.