Dance Review: The Washington Ballet performs a stirring tribute to Balanchine at Wolf Trap Park for the Performing Arts 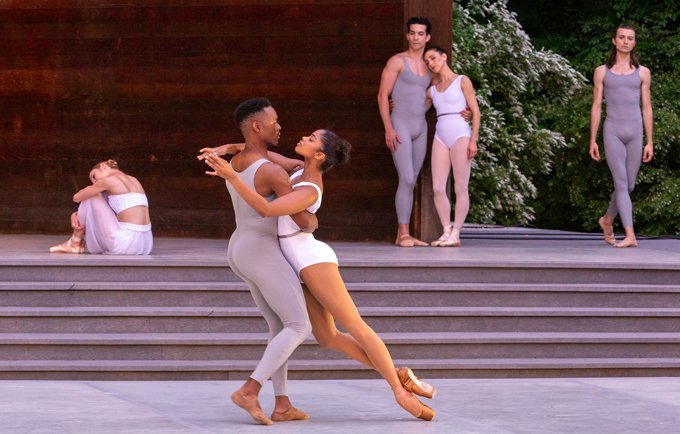 Wolf Trap Park is the perfect place to spend a late summer evening. The setting is serene, and the music seems to shimmer with the stars. You’re always invited to bring a picnic or indulge in some light edibles from the concession stands (wine is available or you can bring your own). Then it’s just sit back, relax, and enjoy a concert.

…one of those memorable evenings of music and dance…

September 14 was one of those memorable evenings of music and dance on the Filene Stage. The Washington Ballet (WBC) performed two of the most beloved works by choreographic master George Balanchine, alongside two contemporary works, including choreographer Silas Farley’s commissioned “Werner Sonata,” and the the Washington Ballet’s Andile Ndlovu in “B1,” a lively celebration of the creative process, reminding us how live dance touches us in ways no other art form can.
Pointing to musicians in the The Wolf Trap Orchestra, Conductor Charles Barker took his bow early in the program, moments before the curtain opened on “Serenade” with the 17 ballerinas, all dressed in what is called a “Romantic Tutu” (knee-length tulle). Their right arms reaching to the heavens. The setting was sky blue with darker and lighter shades throughout.
When we heard the first few notes of Tchaikovsky’s familiar score, a gasp filled the amphitheater. This “Serenade” was a most exquisite production—one of the best ever viewed. A standout was Maki Onuki with her fleeting footwork and unique lovlieness in the mysterious pas de deux. The original lighting design by Jean Rosenthal was perfectly adapted by Elizabeth A. Coco, as the dancers were bathed in a glow,” reminiscent of Russsia’s Golden Age of Ballet. “Serenade” was the first full-length ballet Balanchine created in America and it was first danced by his students at the School of American Ballet in 1934. He dismissed story ballets and was quoted as saying, “I want to see the music and hear the dancing.”
At Wolf Trap, the ”Tchaikovsky Pas De Deux”offered those same magical steps originally created by Balanchine for the third act of “Swan Lake,” but kept as its own ballet. It was once a love fest for his special dancers, Patty McBride and Edward Villella, who danced this piece at Merriweather Post Pavilion in the late ‘70s when the New York City Ballet was in residency in Columbia.
Carrying on the the tradition of enjoying every moment of this ballet, Ayano Kimura and Masanori Takiguchi showed us through their refined technique how the tricky steps are pure music visualization. For example, Kimura manages her fleet footwork to the exact beats of Tchaikovsky’s composition. She’s also a whiz at turns and pirouettes. From his first leaping entrance from stage left, Takiguchi was steadfast in partnering the ballerina, then took off in those across-the-stage leaps that Baryshnikov made famous.
“Werner’s Sonata”features pairs of dancers, the women in muted halter tops and leotards, the men in similar creamy unitards. The lifts and striking poses reminded this writer of previous works by Washington Ballet choreographer, the late, great Cho San Goh. From its exotically tinged music, to the lacquered gleam of the lighting, to the sharply stylized set and costumes suggests an imaginary exotic land in Asia.
Choreographer Silas Farley (from the New York City Ballet) captures the youth and spirit of the current Washington Company in this eye-catching ballet, and we look forward to seeing his latest work in the WBC’s NEXTsteps performed at Harman Hall in October.
Andile Ndlocu, a member of the Washington Ballet, honored his South African roots in the closing “B1” (“Be One”) with a fascinating score by Ape Chimba. Costumes by Liz Vandal were a feast for the eyes, and the dancing was ceremonial and welcoming. The flow of the work gave us time to think about our own families and friends, too.
The dancers deserved the thunderous applause at the end of the performance, but the appreciation for The Washington Ballet Artistic Director Julie Kent, the longest serving ballerina in American Ballet Theatre’s 83-year history, came at a post show reception. She knows the steps, the music and the epaulement that sets her apart from other dancers, and, more importantly, she knows how to bring her dancers together in a seamless manner. Brava!
Running Time:  Two hours and 30 minutes with two 20-minute intermissions.
The Washington Ballet performed new works and classics on September 14, 2022 on the Filene Stage at Wolf Trap Park for the Performing Arts, 1551 Trap Road Vienna, VA 22182. The Washington Ballet presents a new edition of “NEXTsteps” at the Sidney Harman Hall October 12-16, 2022—a best bet for serious balletomanes.