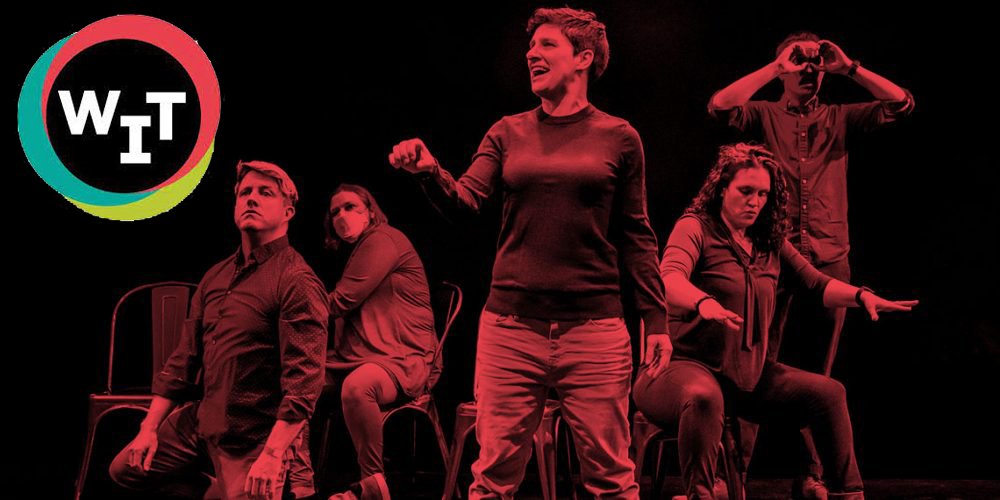 WASHINGTON, DC—As it embarks on its 25th anniversary season, Washington Improv Theater (WIT) will begin a year-long residency at Studio Theatre. WIT will mount six productions (listed below) in three separate performance spaces within the newly renovated Studio facility, in addition to the free, weekly, 12-years-and-running Harold Night series which will move to Wednesday nights.

This new partnership started after WIT began an expansive search for a new home after an unexpected lease termination in March. Studio Theatre Executive Director Rebecca

Ende Lichtenberg reached out to WIT Artistic Director Mark Chalfant to explore the possibility of providing performance spaces. Leadership at both organizations collaborated to find space for all of WIT’s performance programming at an affordable rate.

“The opportunity to put up our performances at Studio is a true dream,” said Chalfant. “Our dire situation in March allowed us to be open to new opportunities and I was thrilled when Studio reached out. I can’t wait to celebrate our 25th year in this world-class theater, and we’ve got such an exciting season planned.”

“We are delighted that Studio Theatre can provide this space for WIT, especially this year, as they celebrate their 25th anniversary,” says Lichtenberg. “We welcome their creative energy as well as the new audiences they will bring into the building in the year ahead.”

WIT’s mainstage programming will take place on Friday and Saturday nights, with a featured show in the early performance and WIT’s company ensembles in the later curtain. Mainstage performances begin on Sept. 30 with a performance series spotlighting veteran musical ensemble iMusical.

WIT still seeks a permanent performance space after the Studio residency ends in August 2023. Any leads should be sent to mark@witdc.org.

About iMusical: For fifteen years, veteran ensemble iMusical has joined the unpredictable playfulness of comedic improvisation with the emotional power of musical theater. A cast of singer-improvisers instantly creates a compelling new show with each performance, comprised of completely improvised scenes, lyrics and music, all inspired by a single audience suggestion. The Washington Post called iMusical “spot on.”

Ask Me Anything: Changemakers (Nov. 18 – Dec. 10 in Stage 4)
Social media never fails to tell us all the ways the world seems to be falling down around us, but there are also people doing amazing things to change world for the better. This run features interviews with people who are making the world better. From politicians to artists, we’ll interview local changemakers and use those interviews as inspiration for a set by WIT’s improvisers.

Also featuring Motherload: This run also features a remount of Motherload, the winner of Capital Fringe’s Best Comedy. Created and performed by WIT ensemble members Jenna Hall and Justine Hipsky, the show is an autobiographical dark comedy about the wounds that accompany complicated mother-daughter relationships.

WIT Experiments with ____ (Jan. 20 – Feb. 11 in the Mead Theatre)
Every art form can use a bit of spontaneity. For this run, WIT collaborates with artists from far-ranging disciplines to create unusual and spectacular hybrids. What happens when you fuse improv with dance? With scripted theater? Let’s find out!

Fighting Improv Smackdown Tournament (March 10 – April 16 in Stage 4)
WIT brings our no-holds-barred (but totally friendly!) improv tournament to Studio! For our fifteenth tournament, audiences are invited to vote for their favorite teams to advance until there is one victor!

Money Changes Everything featuring Not a Pyramid Scheme (May 19 – June 10 in Stage 4)
We’ve all got the late-stage capitalism blues. But we’re still finding joy amid the corporate hellscape. This run features shows about how money motivates people, changes relationships, and just — well — changes everything.

About Not a Pyramid Scheme: Want to become a “boss babe?” Peek behind the curtain of the scam-ridden (yet earnest!) community of multi-level marketing schemes. Directed by Kaelan Sullivan Fleury with Assistant Director Clare Mulligan, Not a Pyramid Scheme comedically explores the quest for meaningful connection and financial independence in an exploitative and regressive industry.

Genre is a Construct featuring Tumbleweed! (July 7 – July 29 in Stage 4)
What’s a genre anyway? We’ve all seen film noir and romantic comedies, but these days genre can be anything from Law & Order: SVU-style procedurals to the Real World/Road Rules Challenge. WIT’s ensembles take nods from popular and not-so-popular culture in this nod to genre.

About Tumbleweed!: Calamity! Love! Foolishness! You are “Wanted!” to see a delightfully silly improvised western filled with colossal characters, extraordinary action, and a live score. Giddy up and let Tumbleweed! take you on a journey through the wild, wild west. Directed by Jared Smith.

Washington Improv Theater is dedicated to sharing the creative, collaborative power of improv in DC. WIT is DC’s premier arts organization showcasing and advancing the art form of improvisational theatre with over 200 artists, 30 instructors, 1,000 students, and 14,000 audience members engaging annually in performances and classes. WIT is a multi-tiered arts organization: a producing organization exploring and forwarding the craft of long form improv in challenging new directions; a community organization serving a rapidly growing family of improv artists. WIT is the place for improv in DC.