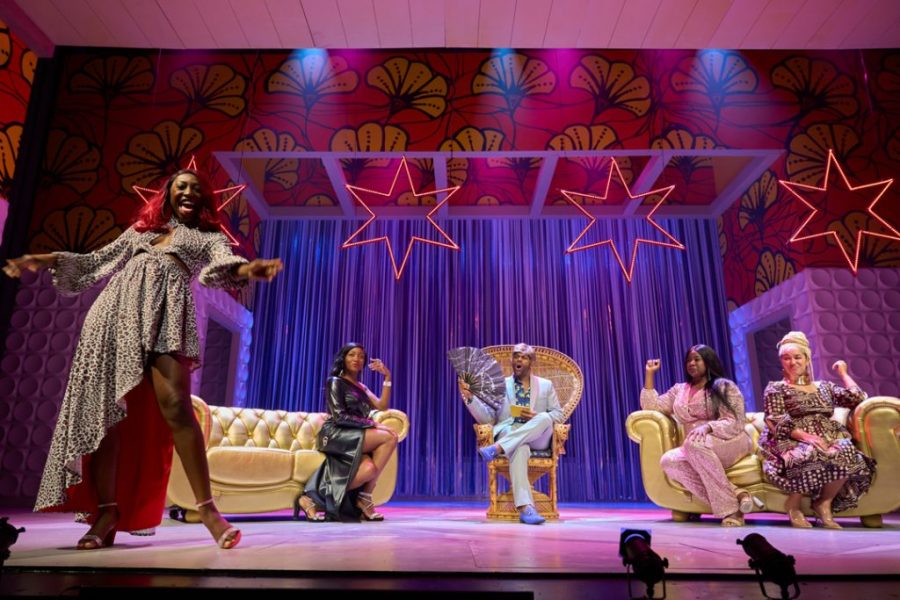 The play “Ain’t No Mo’” made its world premiere at The Public Theatre (NYC) in 2019. Ahead of its Broadway debut this November, Jordan E. Cooper’s critically-acclaimed, new comedy is making its regional premiere at Woolly Mammoth. It brilliantly blends sketch, satire, avant-garde theater, and a dose of drag, while asking the question, “What if the U.S. government offered Black Americans one-way plane tickets to Africa?”

The company does not disappoint as they bring audiences to tears and laughter in this emotional, hilarious, and unexpected production.

Upon arrival, patrons immediately step into African American Airlines’ Gate 1619, highlighting some of the stunning scenic design by Arnel Sancianco, lighting design by (Colin K. Bills), and giving viewers a hint of what is to come. They are met by Peaches (Jon Hudson Odom) who starts the Prologue with an energetic call-and-response that you’d expect at “A Rocky Horror Show” performance, setting the audience up for a church-like experience for two non-stop hours. Joining Peaches are Breon Arzell (Passenger 2), Shannon Dorsey (Passenger 1), LaNisa Frederick (Passenger 5), Shannon Matesky (Passenger 3), Brandi Porter (Passenger 4). They take the audience through a series of satirical vignettes—raw and realistic—highlighting the humor, history, irony, and truth of what it means to be Black in America.

Lili-Anne Brown fearlessly directs the talented actors, supported by the striking costume design by Yvonne Miranda, sound design by Tosin Olufolabi, and fight and intimacy choreography by Jyreika Guest. This production is no easy feat and not for the faint of heart. With 20-plus characters executed to perfection by six actors across eight scenes that included a number of quick changes and no intermission, the team does not miss a single beat.

Odom’s portrayal of Peaches, a character who appears throughout the play as the flight attendant in drag, gives a comedic and heartbreaking performance in the role originated by Jordan E. Cooper. The four female-identifying cast members impressively jump from one scene to the next, portraying multiple characters—from 2008 churchgoers celebrating Barack Obama’s presidential win; the emotional inner conflict of abortion as a Black woman at the “SisterGirls” clinic; to the funny and realistic portrayal of the not-so-realistic, Bravo TV-styled sketch of the “Real Baby Mamas of the South Side;” and closing with an emotional scene of inmates being released from prison as they fantasize about all that Africa will provide once they’re free. Arzell is a standout in all of his roles ranging from the enthusiastic and eccentric Pastor Freeman in the opening scene; the emotional, dead husband, Damien; and the fabulously hilarious Andy Cohen-like host of the “Real Baby Mamas of the South Side.” The company does not disappoint as they bring the audience to tears and laughter in this emotional, hilarious, and unexpected production.

Audiences are in for a treat with “Ain’t No Mo’” at the Woolly Mammoth Theater—a show that pushes the boundaries of what is and should be said about the realities of being Black in America. The emotional rollercoaster on which the audience is taken requires total attention. It’s easy to get swept away into the important stories of these characters and the play seems to go by in the blink of an eye.

“Ain’t No Mo’” runs through October 9, 2022 at Woolly Mammoth Theatre Company, 641 D St NW, Washington, DC 20004. For more information and to purchase tickets, click here. All audience are required to wear a mask inside the building (when not actively eating or drinking).

Keelyn Mitchell is a proud supporter, performer, and educator in the visual and performing arts community. Keelyn's professional experience started as a classical musician (oboe, English horn, and sax) and K-12 music educator in Central Florida, and soon enough her theatre experience led her into professionally stage managing, as a theatre teaching artist, adjudicator for Florida Thespians, and the launching of her photography and videography business - www.oxleypics.com. Most recently, Keelyn has proudly served as the Senior House Manager for the off-Broadway production of Pip's Island (NYC) and now resides in Germantown, MD with her husband and two pugs, where she continues to run her photography/videography business and work with various schools, theatres, and other organizations for those needs.