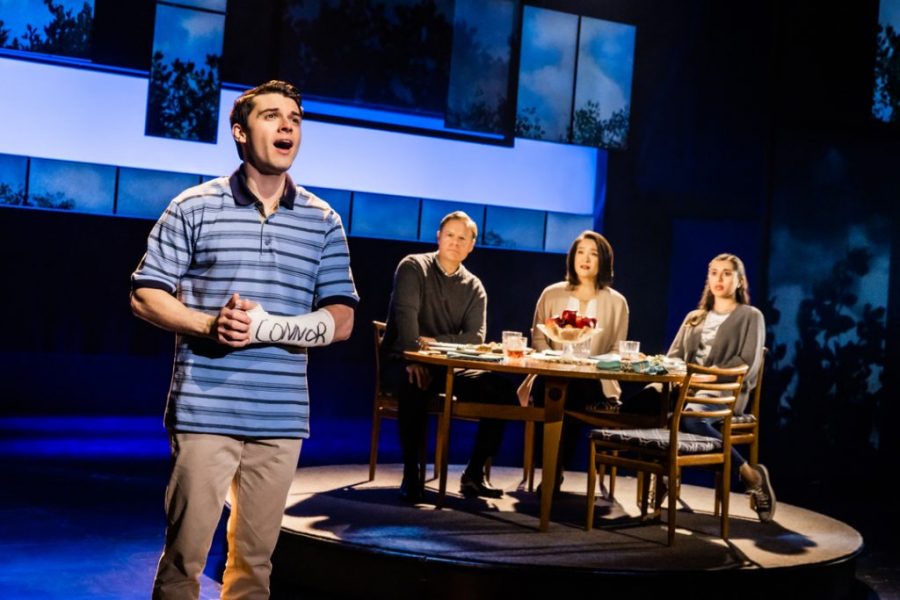 The winner of six Tony awards including Best Musical, ‘Dear Evan Hansen’ has returned to the Kennedy Center this month, with a dazzling set and gifted cast.  Written by Steven Levenson with music and lyrics by Benj Pasek and Justin Paul, the story line is intense, as are the characters, who remind us just how messy life is, no matter how hard we try to get it right.  Frequent moments of comic relief, however, serve to temporarily mask the seriousness of the narrative.

High school student, Evan Hansen (Anthony Norman) is battling teenaged angst along with a debilitating case of social phobia, when the fallout from a chance run-in with Connor Murphy (Nikhil Saboo) spins wildly out of control.  A kid battling his own demons, Connor commits suicide, leaving the people who occupied the center and the periphery of his world to adjust to the new normal.

In the aftermath of the tragedy, Evan lies to Connor’s parents, Larry and Cynthia Murphy (John Hemphill and Lili Thomas) to comfort them but also accrues certain benefits from maintaining the fiction that he and Connor had been close friends.   Larry and Cynthia fill the void Connor leaves by inviting Evan into their lives and treating him like a son, and their daughter Zoe Murphy (Alaina Anderson), whom Evan has admired from afar, becomes his girlfriend.  Fellow student Jared Kleinman (Pablo David Lauceria) decides to cash in on the demand for Connor Murphy memorabilia by selling buttons, and Connor’s close acquaintance, Alaina Beck (Micaela Lamas) becomes the driving force behind the Connor Project, an attempt to memorialize a guy no one knew or cared much about when he was alive.  For the most part, Evan’s mother Heidi Hansen (Coleen Sexton) is left in the dark until Evan is caught in a web of lies and admits to her his part in the fraud.

Mothers Cynthia Murphy (Thomas) and Heidi Hansen (Sexton) begin the show with a lively duet, “Anybody Have a Map?” to express their parenting insecurities, and later, Heidi sings a searing “”So Big, So Small” about the fears and failings she has experienced as a single mother.  Evan (Norman) delivers top-notch renditions of audience favorites, “For Forever” a song about the perfect day spent with a friend and “You Will Be Found.”  Zoe (Anderson), Larry (Hemphill), and Cynthia (Thomas) sing a moving “Requiem.”

The set’s video and audio create the sensation that you’ve somehow managed to bypass your computer screen and actually inhabit social media.  Although bordering on sensory overload at times, it is an effective means to tell a story in which the Internet plays a major role.  Costumes designed by Emily Rebholz serve the production well. Subtle touches help the characters to signal status, self-image, and even world view.

More than just an entertaining evening at the theatre, ‘Dear Evan Hansen’ explores a number of powerful themes, challenging the audience to consider the importance of family, our need to belong, and everyone’s role in ensuring no one is forgotten.  This musical stays with you.

Running Time: Two hours and 40 minutes with one 15-minute intermission.

Masks are required for all patrons inside all theaters during performances at the Kennedy Center unless actively eating or drinking.