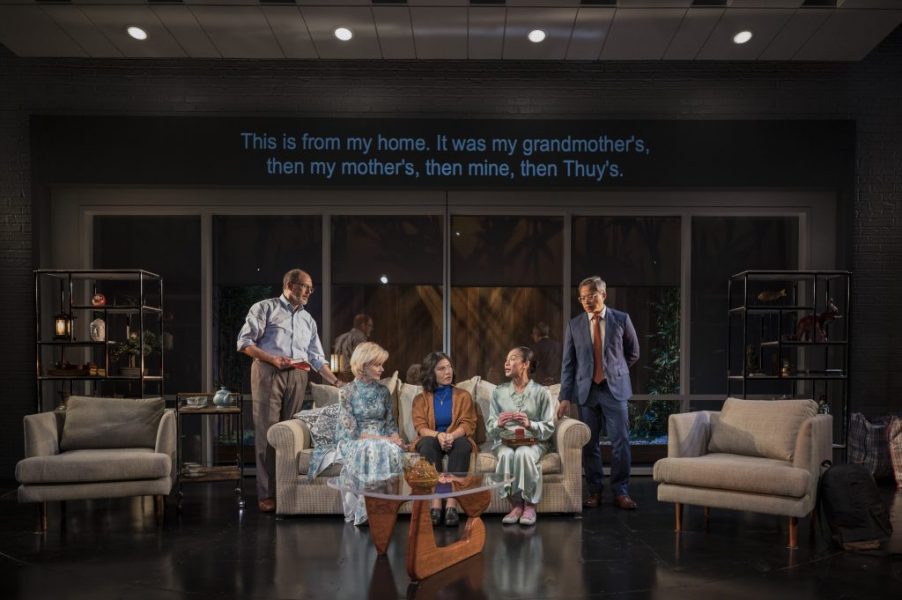 The casting overall is impeccable…the characters are complex, and the play is original and very-engaging.

Set in Washington, D.C., famed attorney Joyce Drumming (Helen Hedman) and her husband, retired foreign service professional Murray Drumming (Bruce Randolph Nelson), have invited their new in-laws, the Trầns (Ðịnh James Ðoàn and Tuyết Thị Phạm, the playwright), to visit them in celebration of their children’s first wedding anniversary. The Trầns have lived in Vietnam all their lives, so the Drumming’s bring a translator along to help greet them and facilitate the first evening of dinner and conversation.  Carolina Ðỗ plays the translator Mỹlinh, a recent law school graduate who has just moved from California to D.C. to be with her boyfriend as he pursues a new career opportunity. Mỹlinh’s family, like that of the playwright, was offered sanctuary in the United States after the Second Indochina War (also called the Vietnam War) and relocated from South Vietnam. She is not only the, sometimes desperate, communication link between the two families but also serves as a narrator and conscience for the audience. Without Mỹlinh’s reflection and questioning, the two families might have quickly strayed into caricatures of “reserved, enigmatic Asians” and “wealthy, self-absorbed White Americans.” The skillfully-crafted script and sensitive interpretation by the actors ensure that all the characters retain their humanity and believability throughout the disastrous evening, despite many social gaffs and misunderstandings.

Mr. Trần, a soldier who fought for North Vietnam, is at first skeptical of Mỹlinh’s intentions. He has a powerful moment confronting Mr. Drumming who, while recalling the fall of Saigon, declares “the victor gets to name the holiday—Liberation Day.” Mrs. Trần, sensitively and effectively portrayed by Phạm, is immediately interested in Mỹlinh’s personal life in comparison to her own daughter who was “swept off her feet” by the Drummings’ son, married him, and moved to the United States in three short months.  Her moments with Mỹlinh are some of the most emotionally resonant in the play.

Mr. Drumming, despite a foreign service career mostly in Asia, is prone to stereotypic observations particularly about Asian women. He constantly refers to Mỹlinh as “little, sweet, and gorgeous” and refers to the Trần’s daughter as his son’s “little bride.” The reaction to such observations by Mỹlinh and Mrs. Trạn underscore how painfully routine such exotifying of Asian women occurs in America. Joyce Drumming is the quintessential Washington insider, triumphant in her success, which she is certain is due entirely to her own abilities and not at all to her inherent privilege. It is to Hedman’s credit that we manage to care for her, despite her shocking treatment of Mỹlinh, not as a professional, but as a servant. Joyce has a devastating scene in which she tries to defend herself. We pity her, not least because of her inability to truly empathize with the Trầns. The casting overall is impeccable.

As the play opens, the audience stares at its own reflection in the glass windows of a northwest D.C. office building, at once amusing and intimidating. All the surfaces are hard and grey except for a single red door—an escape route Mỹlinh uses a several difficult moments in the evening’s conversation. he action moves to a Thai restaurant the Drumming’s have chosen to host the Trầns where Murray inexplicably greets Mr. Trần with a Scotch in hand but never offers one to his guest. Following dinner, the set changes quickly to the Drumming’s living room filled with memorabilia from their travels (expressively relayed by the stunning projections of photos from their travels). For a 90-minute production, three sets is a big ask, but set designer Se Hyun Oh and projection designer Patick W. Lord create a beautiful and believable world that moves seamlessly scene by scene from remoteness to intimacy.

Costume designer Jeannette Christensen immediately cues us in to Joyce’s oblivious cultural appropriation by dressing her in a “traditional Asian” outfit. Tellingly, Joyce’s only concern is whether the color will be acceptable for the evening. Mrs. Trần, in contrast, appears in a stunning contemporary jumpsuit.

Washingtonians who travel to Baltimore for this delightful production, especially those with international careers, will have many “a-ha” moments watching the Drumming’s and the Trầns. It is hard, in 90 minutes, to give each character its due, but Mr. Trần’s brief comments on the war were so absorbing I wished we could have heard more from him about its impact on him and the people of Vietnam. Murray Drumming (we never learn the Trần’s personal names) causes most of the cringing laughter, yet I wanted to hear more from him about his love for his wife, son, and country. These are quibbles—the characters are complex, and the play is original and very engaging. I highly recommend “Dinner and Cake.”