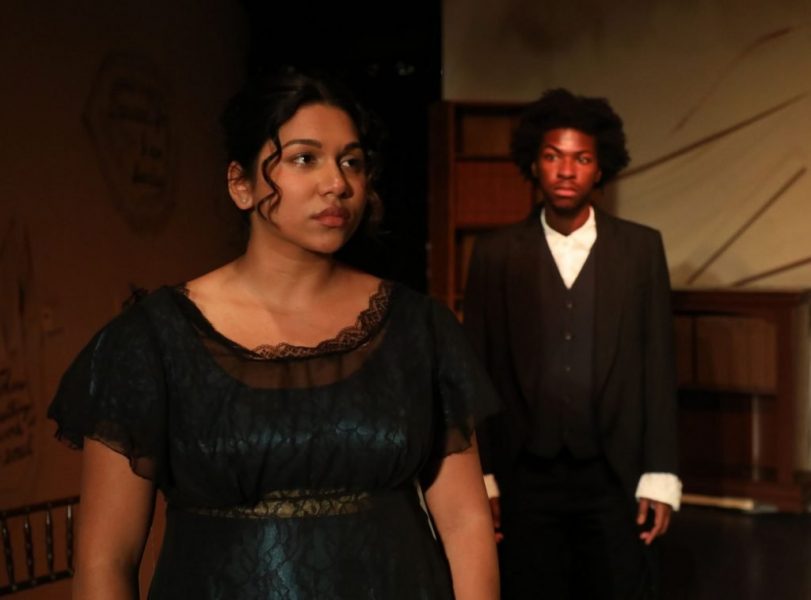 “Did I request thee, Maker, from my clay to mold me man? Did I solicit thee from darkness to promote me?” – John Milton, from “Paradise Lost”

There have been several stage adaptations of Mary Shelley’s classic novel “Frankenstein; or, The Modern Prometheus” over the years. Peggy Webling’s 1927 effort was itself adapted to become the 1931 Boris Karloff film we all know today. Seattle Playwright Danielle Mohlman has penned a fresh take on the story, using novelist Shelley as the jumping-off point for a tale in which art imitates life.

The moments of lush theatricality in Strand’s offering are too numerous to count…Hooper is absolutely brilliant, in full command of the action at all times.

While the young Mrs. Shelley (Caitlyn Hooper) mourns the death of her daughter, her husband entertains guests downstairs. Percy (Shaquan Pearson) is a second-rate poet and a first-rate heel, filled with the contemptuous misogyny of the Regency period. He visits Mary from time to time to gaslight her, as does the tormenting ghost of her mother, Mary Wollstonecraft (Nicolette Le Faye). Practically drowning in grief and doubt, Shelley writes her novel about a young man who creates a life out of death. His creation, in turn, creates death out of life. The novelist’s creation, on the other hand, is both derided and coveted by Percy, who states that he will do her a favor by putting his name on it, so that it’ll be published. His bitter threats notwithstanding, and against the editorial advice of her late mother (herself an accomplished author), Shelley completes her novel in her own way.

Within this framework, most of Mohlman’s play is a telling of the novel’s story, in a method that personalizes it to Shelley. Victor Frankenstein, the young scientist, is role-doubled with Percy Shelley. The Creature is doubled with writer Shelley. The clear statements of these specific choices work very well in integrating a theatrical whole. A talented ensemble embodies the novel’s other characters, including Victor’s parents (Margaret Condon and Dave Iden). Victor is also at the apex of a love triangle, stuck between his adopted sister, Elizabeth (Mika J. Nakano) and his university classmate, Henry (Jacob Albert Gross). Frankenstein family governess, Justine (Alex Ade), takes care of five-year old William (Kay Black). Just prior to the Creature’s murderous rampage, it finds brief welcome at the farm of Madame DeLacy (Ashley Sigmon), who reads Milton to it through a closed stable door.

The moments of lush theatricality in Strand’s offering are too numerous to count. One highlight is Victor Frankenstein’s fever dream, in which the ensemble performs intricate, jerky marionette choreography. Nakano’s movement work, in particular, is gorgeous in that sequence. Flashes of individual brilliance by this cast fill the production, in fact. When Gross oozes Henry’s desperate longing, and Pearson’s Victor responds “I love the way your mind catastrophizes,” there is an emotional THUD that stops the show. Ade, in another role as Agatha DeLacy, turns from sweet to vicious on a dime once she discovers her mother’s secret boarder. Black’s portrayal of a precocious boy is a symphony of simple wonder and delight, and the final scene they share with Ade is a masterclass. Condon, as Caroline Frankenstein, keens with surprising subtlety, and with a sincerity that’s hard to pull off. The patriarch, Alphonse, is both slick and sinister in Iden’s performance. Le Faye’s take on the proto-feminist ghost is urgent yet cold, while Sigmon gives warm humanity to DeLacy.

Caitlyn Hooper performs the roles of Mary Shelley and Victor Frankenstein’s Creature. Or, perhaps more accurately, Hooper plays Shelley—and plays Shelley playing the Creature. That’s the narrative construct in Mohlman’s script. Hooper is absolutely brilliant, in full command of the action at all times. When Shelley falters, the struggle is printed across Hooper’s face. When Shelley, exasperated, says “Look around, there are awful men everywhere,” Hooper knows exactly where the fourth wall is, and dares to walk right up to it without stepping across.

Director Lanoree Blake is at the helm of the whole shebang, and aside from beautiful work with her cast, she deftly employs a number of technical toys to play with. Brad Norris’ set features some cute and clever hingey items, and Chris Allen’s lighting is certainly spooky when required. The star of the design team, though, is sound designer Madeline “Mo” Oslejsek, whose accompaniment is thickly layered, and provides a jagged texture that propels all of the happenings on stage.

Running Time: Approximately two hours and 20 minutes with one intermission.