Theatre Review: ‘Heroes of the Fourth Turning’ at Studio Theatre 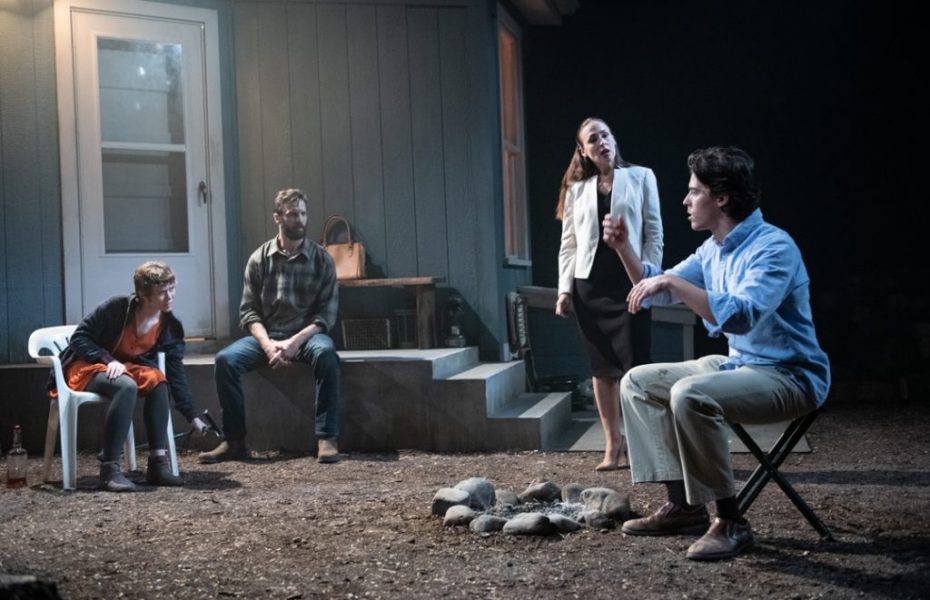 I’ll admit that I’ve been involved in many conversations in which liberals talk about conservatives. They’ve occurred more and more often since 2016, and they almost always follow the same formula. Everyone has their own ideas about what our current political moment means and about how the country got to this point, or more specifically, how the opposing side got to this point. These conversations are always framed as a diagnosis and a prescription for modern conservatism, as described by liberals.

It is in the subtext that Studio’s cast and direction by Sivan Battat really shine. Every performer brings something unique to their character, while at the same working off each other impressively.

I always knew, of course, that there were parallel conversations occurring among conservatives. But I was never privy to them, so I could only imagine what was being said.

“Heroes of the Fourth Turning” makes its audience privy to those conversations. Now being performed at Studio Theatre, the 2019 play written by Will Arbery centers on a group of young, conservative Catholic intellectuals who return to their college town in Wyoming after seven years to celebrate the college’s new president. They linger late into the night and discuss everything from Trump to abortion to racism to the play’s titular ideology⁠—that society evolves in generational cycles, that we are currently in the “crisis” part of the cycle, and that we are due for a war anytime now.

The four main characters are presumably the heroes in that war, but they are not exactly a united front, with each coming at conservatism on different terms. Teresa (Laura C. Harris) is the most far right —a conservative writer and a follower of Steve Bannon. Justin (Gregory Connors) believes the evangelical right would be better off staying insular. Emily (Sophia Lillis), who’s mother is the new college president, is in pain with an unnamed disease and is the most empathetic to liberal beliefs. Kevin (Louis Reyes McWilliams) is faithful to conservatism but is in a state of crisis over it: “After I voted for Trump I vomited next to my car,” he says. Each character has their own unique ideas about what our current political moment means, their own explanation for how society got here, their own diagnosis and prescription for liberals.

When “Heroes” first premiered in 2019 off-Broadway, it was considered radical⁠—a term usually associated in theatre with the most boundary-pushing, progressive works. But this play was radical for New York audiences because Arbery not only chose to write a play in which conservatives very bluntly discuss their views, but also presents no counterpoints to them. Make no mistake, though, this is not a show designed to prove anyone correct or incorrect.

It is also not a show designed to diagnose, even if that’s what audiences, especially New York or DC audiences, might want and expect from it. Instead, the driving force behind “Heroes”—and what makes it work—is the emotional tension that builds as a result of the characters’ crises and conversations. The actual substance of the debates they have is often inconsequential compared to the play’s subtext, which grows in tension throughout the play. That subtext makes “Heroes” as compelling and fascinating a character study as it is a window into our political moment.

It is also in that subtext that Studio’s cast and direction by Sivan Battat really shine. Every performer brings something unique to their character, while at the same working off each other impressively. As an ensemble, they have a strong command for the rhythm and pace of the script, which is crucial for a work like this. I’ll admit I was skeptical of the play’s intermissionless two-hour-and-ten-minute runtime, but Studio’s production is captivating enough that it kept me engrossed throughout.

The design elements, too, create a deceptively simple space for the cast to work in. A meticulously detailed set by Yu Shibagaki and eerie lighting design by Amith Chandrashaker work well to bring the setting to life in a way that makes you feel like you really are a bystander to a conversation in the woods of Wyoming.

It is the transportive ability of Studio’s production that makes “Heroes” so gripping. I found myself so drawn into the world of the play that the final blackout was downright disorienting. “Heroes of the Fourth Turning” is the kind of show that is difficult to sit with, regardless of your personal politics, but forces you to sit with it anyway, and Studio’s production is one with which everyone should sit with.

Runtime: Two hours and 10 minutes with no intermission.