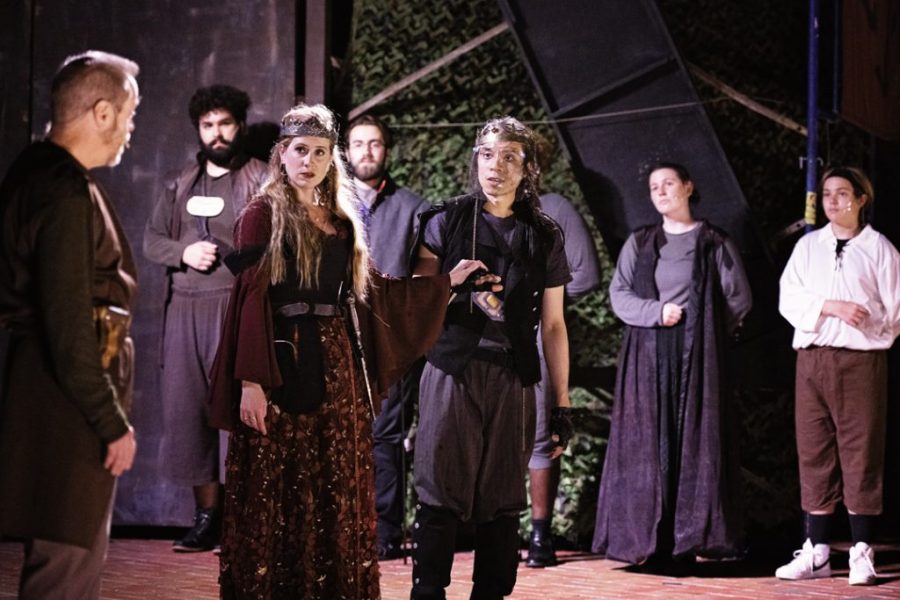 Set in 11th-century Scotland, “Macbeth” is a play in five acts that examines blind ambition, its effects on those who embrace it, and the consequences for anyone standing in its path. Although the Shakespearean text may seem unfamiliar to the modern listener, the play’s themes remain as relevant as ever.

Generals Macbeth (Jeff Chi) and Banquo (Kevin Dykstra) stumble upon three witches (Syd Schepisi, Amy Steinhardt, and Isabell Tasheva-Shetler), who prophesy that Macbeth will be King. When Lady Macbeth (Jaclyn Robertson) hears of the prediction, she convinces Macbeth to kill King Duncan that night (Ward Kay) and assume the throne himself. Having achieved their gruesome aim, the pair is tormented by guilt, quickly discovering that their lust for power has the potential to destroy them and the people who stand in their way.

Co-directors, Stephen Shetler and Julia Tasheva have assembled a glorious cast for this challenging endeavor. The language is crisp amidst a soundtrack that conjures the spooky, otherworldly character of the story, and the lighting design by Stephen Shetler, including the lights that encircle the venue, add an element of magic to the proceedings.

The witches, who are crucial to the story’s forward movement, are both mysterious and terrifying––their presence made more intense by the accompanying fog and spectral whispers, thanks to Sound Engineer Cooper Rummel, that leap off the stage and into the night air. Other stand-out performances include Chris D’Angelo’s rendering of the noble, yet grief-stricken Macduff; Jaclyn Robertson’s embodiment of the ambitious, yet remorseful and guilt-ridden Lady Macbeth; and of course, Jeff Chi’s Macbeth, a complex and powerful figure who chooses to pursue power at all costs. (Read MD Theatre Guide’s Quick 5 interview with Chi here).

For the uninitiated, this production provides an accessible introduction to Shakespeare’s work in a lovely, outdoor venue in the heart of Fairfax City where you can set up your lawn chair and munch on your favorite snack while taking in one of the Bard’s most popular plays. So pack a picnic, pour some wine, and immerse yourself in this outstanding production while it lasts.

Running Time: Approximately one hour and 45 minutes with no intermission.