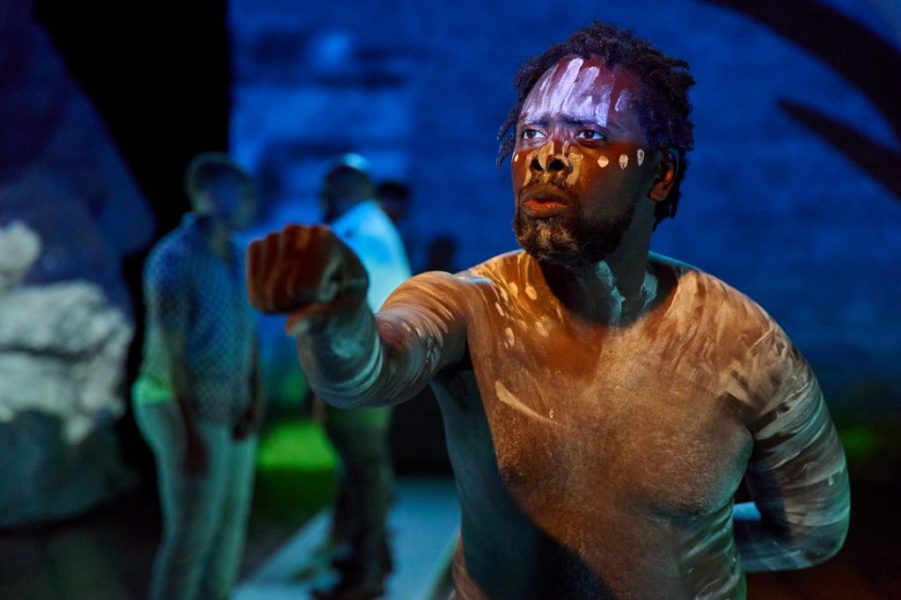 Lynn Nottage’s, “Mlima’s Tale” is a beautiful play about the journey of an elephant, Mlima, whose tusks are removed after being illegally poached by hunters in the country of Kenya. It is a story that calls attention to animal rights laws and the black-market trade by giving personification to an elephant that haunts anyone who possesses his ivory tusk. The play is based on an article by Damon Tabor titled, “The Ivory Highway” in 2014. “Mlima’s Tale” premiered in April 2018 at the Public Theater in New York City and was nominated for the 2019 Lucille Lortel Award for Outstanding Play.

Nottage’s play is currently being performed at 1st Stage with four cast members exhibiting an extraordinary range of acting to depict fear, pain, frustration, and joy through multiple characters. Jeremy Keith Hunter portrays Mlima, Andrew V. Ly (Ensemble), Deidra Lawan Starnes (Ensemble), and Shaquille Stewart (Ensemble) are directed by José Carrasquillo to give light to a globally exploitive industry. Carrasquillo’s direction, along with Nottage’s writing, allows the audience to see that multiple people can be part of an antagonistic force that harms wildlife for their financial gain.

Within the first scene, Jeremy Keith Hunter (Mlima) is seen barefoot and shirtless, covered in streaks of white body paint as he stomps gracefully on stage. Hunter firmly holds up his arms to mimic the truck of an elephant and counties throughout the remainder of the play. Hunter remains on stage until the last scene as a haunting figure toward all characters. The idea of haunting becomes intimate as Mlima watches countless individuals bicker over the most expensive parts of him or want to honor the beloved elephant. Hunter’s physical movement tells the story as he drapes his body on other characters to display emotions as Mlima is silenced through death.

The ensemble balances heavy topics about the stereotypes about Africans, the history of international trade with China, and the generational exploitation of animals for monetary gain. Each cast member in the ensemble performs at least four other characters and the characters can only reoccur once in the play. The ensemble plays across race, age, and gender to fulfill each scene. Not many props are used as characters hold imaginary items in at least three scenes.

The set design by Giorgos Tsappas is simple but eye-catching, with three white tusks arching over the stage. There are rocks aligned between the tusk to suggest a location but the location does change throughout the play. The lighting design by Sarah Tundermann assists Hunter’s (Mlima) character by casting shadows against the right wall that resembles an elephant.

“Mlima’s Tale” at 1st Stage is executed well by the company members, director, and set design. The show is worth seeing if you are interested in animal rights and the poaching industry or if you want to experience another important play by a two-time Pulitzer Prize of Drama winner, Lynn Nottage.

“Mlima’s Tale” runs through October 9, 2022 at 1st Stage, 1524 Spring Hill Rd, Tysons, VA 22102. For more information and purchase tickets, click here. All patrons, volunteers, and staff are required to be masked while inside the 1st Stage Theatre facility.