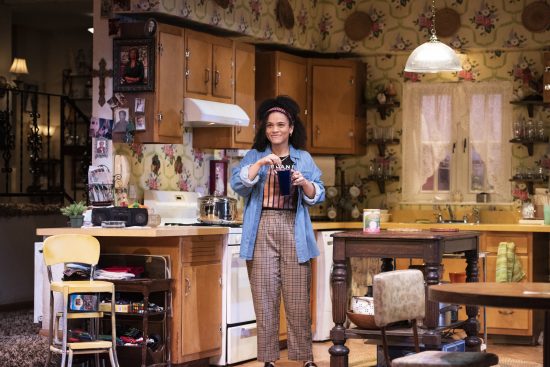 When family matriarch Gloria dies, a raucous multi-day wake begins, testing her family’s stamina and composure. Depicting the Caribbean tradition called Nine Nights, Natasha Gordon’s play “Nine Night” brings to life this Jamaican-British family’s mourning. Following its 2018 premiere in the UK’s National Theatre, “Nine Night” became the first play written by a Black British woman to run in London’s West End. An acclaimed comedy in the UK, little humor comes across in Round House Theatre’s production. The decision to subdue the script’s comedic potential dulls some of the show’s appeal.

Lorraine (Lilian Oben), Gloria’s second daughter and caretaker, forms the beleaguered heart of “Nine Night” as she hosts the celebration and struggles with her grief and unanswered questions. As the family gathers for the wake, tensions bubble up, including between Lorraine’s outspoken daughter, Anita (Kaitlyn Boyer), and Gloria’s judgemental cousin, Maggie (Kim Bey), who constantly finds the British-born members of the family wanting when compared against the examples set in Jamaica. Sibling rivalries brew between Lorraine, her brother Robert (Avery Glymph), and her half-sister Trudy (Joy Demichelle), as they tussle over who will deliver the eulogy at the funeral and the legacy and scars left by their mother. As the nights tick down, secrets emerge and conflicts move from petty to dire.

Natasha Gordon’s script is well-paced, with a weighty premise and ample drama to hold an audience’s attention. In a minor misstep, Timothy Douglas has directed “Nine Night”—nominated for Best New Comedy at the Laurence Olivier Awards—more like a drama. Without the release of humor, the constant squabbles become exhausting. Even in the face of a huge loss, this family struggles to coalesce or compromise.

On a stage bathed in warm yellows and oranges, Gloria’s age shows in the details of her home in a scenic design by Tim Mackabee. A squat, bunny-eared TV sits on the floor beside a sagging ottoman. Shag carpet, vinyl floors, and a wall-papered kitchen date make the home several decades out of fashion. The shelves, walls, and cabinets are ladened with trinkets and kitsch—the possessions accumulated in a long life. Although Gloria is never seen in the flesh, she looms large over the show— literally. When she dies, her enlarged portrait descends, spotlighted above the set, where it remains.

Among the consummate creative team, April Hickman’s costume design and Matthew M. Nielson’s sound design do heavy lifting to support storytelling. Anita dons cute but casual outfits, to the rebuke of some of her older relatives, like the stuffy Maggie. Robert’s polished and preppy attire contacts with Lorraine’s comfortable and understated clothing, reflecting deeper divides between the siblings. Meanwhile, Nielson’s sound design conjures a rollicking party off-stage, with muffled voices and music to fill out the seven person cast.

“Nine Night” brings perspectives and stories too rarely represented to our stages by exploring the Jamaican-British experience. Natasha Gordon broke barriers with this playwriting debut and established herself as a new writer to watch. A quality, technical design team and experienced cast deliver a solid production at Round House Theatre.

“Nine Night” runs through October 9, 2022 at Round House Theatre, 4545 East-West Highway, Bethesda, MD 20814. For more information and tickets, go online. Masks are required for all guests, regardless of vaccination status, except while eating or drinking in the lobby café area.