Theatre Review: ‘No Place to Go’ at Signature Theatre 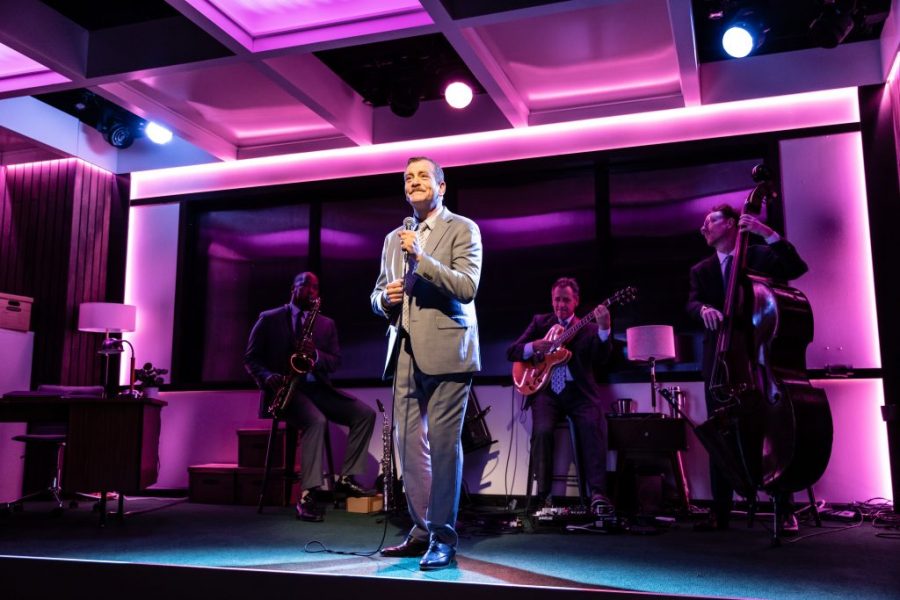 It’s no secret that corporate America is changing—much has been written about it—most obviously in the rise of remote and hybrid work. But it isn’t just changes in physical space. Young and very online people especially, increasingly advocate for a relationship with work that is purely transactional, for a very “you don’t owe your employer anything more than what’s in your job description” stance. After all, if the company views you, the employee, as nothing more than a nameless worker, then you’ll do better to avoid forming any connection.

What this movement fails to consider, though—and what is exemplified in “No Place to Go,” a 2012 musical play written by Ethan Lipton and now playing at Signature Theatre—is that it’s nearly impossible to avoid forming some kind of connection to the place where you spend eight hours a day, five days a week.

…what Smith does well, really well, is truly embody the whirlwind of emotions—fear, guilt, even heartbreak—that accompanies job loss.

George, the protagonist of the (almost) one-man show, understands this connection, even if he knows it’s a naive thing to feel. “I got a place to go in the morning,” he sings in the opening number, romanticizing the simple aspects of corporate life. “And everybody there loves my opinions, and we tear some funny jokes at the meeting with the bagels, yeah.”

George works in a “permanent part-time” position as an Information Refiner at an unnamed company that makes an unnamed product. He isn’t defined by his job, though. As is true for many, his job is a means to afford his passions. Still, after twelve years, he’s formed a connection to his job and the people he works with, and he’d like to think that the company has formed a connection to him.

That makes for a rude awakening when he find out the company is moving very, very far away—to Mars, to be exact—and doesn’t much mind whether or not he comes with them.

Perhaps that unrequited romanticization is why George spends so much of “No Place to Go” singing the blues—figuratively and literally. The show is structured as a jazz lounge set performed in a modernist, capitalist fever dream. George narrates his last few months at the company in between songs (backed up by the talented jazz trio of Ian M. Riggs, Grant Langford, and Tom Lagana) in which he muses on anything from playing on the corporate soccer team to the Works Progress Administration. It feels like the entire show takes place in his head as he lets his imagination run wild sitting bored at his desk.

In Signature’s production, directed by Artistic Director Matthew Gardiner, that imagination is visualized largely through scenic and lighting design by Paige Hathaway and Max Doolittle, respectively. The show is performed inside a retro office that lights up with shades of blue and pink as George sings, transforming the office into the jazz club he imagines himself in.

The trouble is part of the thrill of a jazz club is the intimacy of feeling like you’re really in the same space as the musicians and the exchange of energy between the performers and the audience. It’s a communal thrill, but in Signature’s “No Place to Go,” the performers have been separated from the audience not only by the box of a set, but also by the white frame that surrounds it, creating a visual barrier that is difficult to overcome.

As George, Bobby Smith does his best to overcome this divide with an energetic performance. In this role, he may actually be too talented of an actor for his own good. In many of the show’s most intimate moments, as George describes his fears of facing unemployment or losing his work friends, Smith has the kind of raw emotion that really engages the audience and makes you feel a real empathy for him. There are other moments in this show—especially in many of the show’s often satirical and larger-than-life numbers—when Smith doesn’t quite reach the parodic level necessary for the comedy to be as effective as it could be. Still, what Smith does well, really well, is truly embody the whirlwind of emotions—fear, guilt, even heartbreak⁠—that accompanies job loss.

When “No Place to Go” first premiered in 2012, it was called a “musical ode to unemployment,” coming just a few years after the financial crisis. Now, Signature’s production comes a few years into the rapid changes to corporate America brought on by the pandemic. In many ways, this production feels like a eulogy for the old corporate world. In another ten years, after all, the kind of company culture George enjoys may not even exist anymore.

Much has been written about changes to the norms of office work, and often those writings emphasize what is gained through these changes. But in 2022, “No Place to Go” dares to ask what is lost, as naive as that may be.

Runtime: Eighty-five minutes with no intermission

Advisory: Recommended for teens and adults.

“No Place to Go” runs through October 16, 2022 at Signature Theatre, 4200 Campbell Ave, Arlington, VA 22206. For more information and to purchase tickets, click here. COVID-19 Health and Safety: Masks are required.