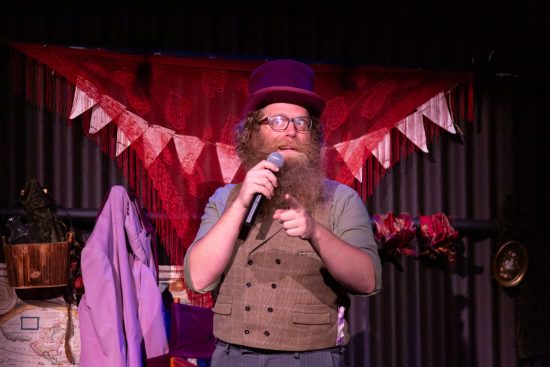 A dark, wonderful, and unusual musical graces Theater J at the Edlavitch DCJCC this month. “Old Stock: A Refugee Love Story” threads the relationship of two refugee Romanian Jews in Canada between high-energy Klezmer music, a musical tradition from Central and Eastern European Ashkenazi Jews. Created by Hannah Moscovitch (read our “A Quick 5” with Hannah Moscovitch here), Ben Caplan, and Christian Barry (who also directs), “Old Stock” is wrapped in the conceit of a traveling troupe of performers and explores where we call home when that home forces us out. Don’t let the love story mislead you. This comedy gets dark with accounts of violence, disease, and loss. But crisp writing and lively music make “Old Stock: A Refugee Love Story” an uncommon delight.

The Wanderer, played by co-creator and co-composer Ben Caplan, narrates “Old Stock” with a showman’s energy and growling voice. Opening the evening with the song “Traveller’s Curse,” he announces “I have been libeled as a wanderer/ This is not the case/ I have a home, it’s just that/ It’s an inconvenient place right now.” The lovers, Chaya (Shaina Silver-Baird) and Chaim (Eric Da Costa), meet in Halifax, each quarantined by the port authorities for suspected cases of typhus and tuberculosis respectively. At 24 and already a widow, Chaya arrived with over a dozen of her relatives after a long journey from Romania through Russia to finally end in Canada. Chaim, an awkward and earnest 19-year-old, arrives alone, his entire family lost to a pogrom. Although Chaim is immediately smitten with Chaya, the decades-long relationship unfolds with much turmoil, both from the baggage of their pasts and the struggles of forging a new life in a new land.

In a tight, 90-minute show packed with 10 songs, all the performers double as musicians: Ben Caplan on guitar and banjo; Shaina Silver-Baird on violin; Eric Da Cost on woodwinds (particularly clarinet); with Graham Scott on keyboard and accordion and Jamie Kronick on drums, completing the sound. Ben Caplan and Christian Barry’s lyrics are artful and clever, especially in the upbeat and exuberant “Truth Doesn’t Live in a Book” and quietly reflective in “What Love Can Heartbreak Allow.”

Louisa Adamson and Christian Barry’s set design packs the action in a small, enclosed space akin to a caravan or train car, suggesting a life on the road. It is opened for the performance and then once again packed up at the end. String lights emanate out from the stage, hanging over the audience like at a circus. Fairy lights and lace curtains decorate the warm glow of the caravan. Props are minimal—a few suitcases, a tea vessel, and a bundled cloth. In a life on the move, one makes do.

The Wanderer’s costume, designed by Carly Beamish, starts as an absurd, ring-master’s outfit that includes a lavender jacket with burgundy trims, a ridiculous feather plume in the lapel, and a top hat. As the show progresses, the Wanderer sheds these trappings, replaced with a tallit—a prayer shawl. Chaya and Chaim wear the plain and conservative styles of the early 1900s, Chaya’s black high-neck blouse a sign of her ongoing mourning. Although the design harkens a hundred years back, this refugee story clearly comments on today.

A forceful and original musical creation, “Old Stock: A Refugee Love Story” lightens a painful story with dark humor. The small cast generates big sound in the Klezmer score, while always returning to the somber undertones of transience and instability. Soon, the troupe will be heading on so get to Theater J while you can!

“Old Stock: A Refugee Love Story” runs through September 25, 2022 at Theater J, 1529 16th Street NW, Washington, DC 20036. For more information and tickets, click here. All patrons in the Goldman Theater are required to wear masks covering their nose and mouth. Masks are optional but encouraged in the Q Street and 16th Street lobbies, hallways, and other public spaces.