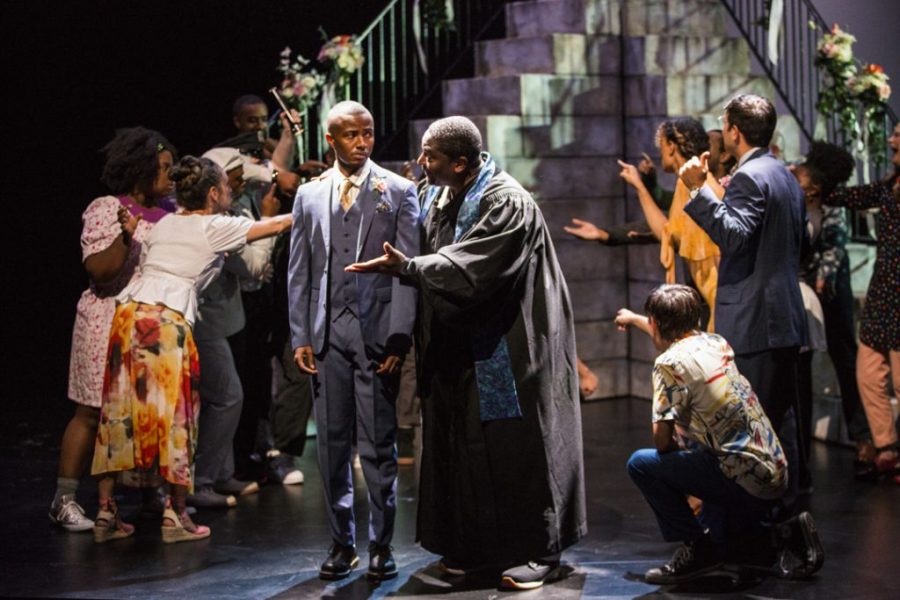 When I heard Center Stage was going to put a Baltimore spin on “Our Town,” I wasn’t sure what to expect but this production definitely has a Baltimore influence. The result is a play written nearly 100 years ago with a modern spin. The script from Wilder’s original is the same, but the characters make a play written in 1938 seem fresh and current.

Lance Coadie Williams plays a Stage Manager with a big personality, speaking directly to the audience to draw us into the action. Although the play is set in 1901, Williams wears a jumpsuit and durag, bringing in a bit of Baltimore and letting us know that this play is not your run-of-the-mill “Our Town.” Continuing with this contemporary twist, Howie Newsome (O’Malley Steuerman) delivers the milk on a bike he calls “Bessie” and Joe Crowell (Dagan Brown) brings the newspaper on his scooter.

Director Stevie Walker-Webb draws us into the play by having the cast walk onstage from the aisles in the audience rather than backstage. When the Stage Manager calls for Professor Willard (Nancy Linden) to give us a bit of history about Grover’s Corners, an older lady pops up from her seat in the audience and walks onto the stage. Walker-Webb does a great job of keeping the play current and the action moving. Linden comes onstage to a round of applause, wearing a mask and dropping all the papers she’s holding. When Editor Charles Webb (Derek Garza) tells us more about Grover’s Corners, questions come from actors in the audience (regarding the culture of the town and social justice).

Scenic Designer Anton Volovsek, Costume Designer kindall houston almond and Lighting Designer Josh Martinez-Davis capture the flavor and texture of Baltimore. Sound Designer Nina Field also contributes to the success of the performance. The Grover’s Corners choir sings gospel while the actors continue to speak. Simon Stimson (Michael David Axtell) plays the piano and even brings in a bit of Stevie Wonder at the end of Act I. We hear the train whistling, the rain falling, and a clap of thunder at different parts of the show, enhancing the setting with sound.

Parts of the play are also quite funny. When Emily (Kimberly Dodson) and George (Avon Haugton) are about to get married, Editor Webb comments that his dad advised him to always show his wife who’s boss and never let her know how much money you have…but George should do the opposite. When Myrtle Webb (Rebecca L. Hargrove) comments how a bridegroom shouldn’t see the bride on the day of his wedding, Editor Webb comments that no bridegroom should see his father-in-law on the day of the wedding either. In addition to his role as Stage Manager, Williams adds humor playing the man running the ice cream soda shop, the minister performing the wedding, and a neighbor.

Although the language is all Thornton Wilder, this is an “Our Town” filled with big personalities and the spirit of Baltimore—with the sights, sounds, and audience interaction. If a “hey, hon” was thrown in, the transition would be complete.

Advisory: This production contains the use of strobe/pulsing lights, discussions of death and dying, and depictions of alcohol abuse.

“Our Town” runs through October 9, 2022 at Baltimore Center Stage, 700 North Calvert Street
Baltimore, Maryland 21202. For information and tickets, call the box office at 410.332.0033 or go online. Masks are required, and ID and proof of vaccination need to be shown prior to entry.