Theatre Review: ‘Songs for a New World’ at Rep Stage 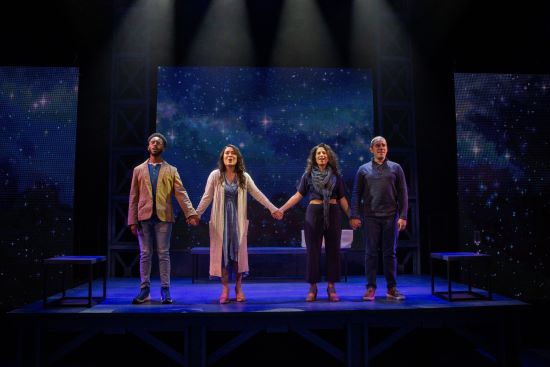 Rep Stages production of “Songs for a New World” is a collection of songs by Tony Award-winner Jason Robert Brown (The Last Five Years, Parade, and Bridges of Madison County) and is a retrospective of lives in a time of change. It is a series of loosely tied musical vignettes examining a person or people at a specific time in their lives and at a time of decision. This production is directed by Joseph W. Ritsch, the Producing Artistic Director at Rep Stage.

This production is similar in a way to Stephen Sondheim’s “Side by Side” except this was Brown’s first off-Broadway musical. The performers change roles from scene to scene as does the mood—from the humor of “Just One Step” performed by Sarah Corey, which looks at a woman threatening suicide as she berates her husband for all his flaws that have brought her to this point to “The River That Won’t Flow” which focuses on homelessness as sung by Trés McMichael and Benjamin Lurye. Some of the numbers were moving and passionate. Justine “Icy” Moral sings almost rapturously for all mothers in “Christmas Lullaby.”

There is something for everyone. “The Flagmaker” (Corey) and “Flying Home” (McMichael) point out that death is often the real by-product of conflicts. “King of the World” (McMichael) reflects on the false imprisonment of people of color. “The World Was Dancing,” sung by Lurye and Moral, looks at a couple that separates but realize that they were better together. My favorite, “Surabaya-Santa” (Corey) is just flat-out hilarious as Mrs. Santa bemoans being left home Christmas Eve again. The vocal performances are superb. These are highly trained singers, and all four can belt out a number whether it’s a love song or a lullaby.

More of a concert, Ritsch just allows the music to flow, with minimal choreography. “With joy, poignancy, and passion, ‘Songs for a New World’ celebrates life, love, and the choices we make,” states Ritsch.

The set by Daniel Ettinger is comprised of projections on three screens behind the performers and include the exterior of New York City apartments and stores, the rooms inside those buildings, a jail, and snow. The lighting design by Conor Mulligan and sound design by Adam Mendelson compliment the projections.

“Songs for a New World” is a satisfying way to look at our lives as we have come out of isolation and begun anew after this challenging period in our world history.

Running time: One hour and 50 minutes with one intermission.

Advisory: Subject matter may not be suitable for young children.

“Songs for a New World” runs through October 2, 2022 at the Studio Theatre at the Horowitz Visual and Performing Arts Center on the campus of Howard Community College, 10901 Little Patuxent Parkway, Columbia, MD 21044. The Box Office is open for in-person and over-the-phone ticket purchases (443-518-1500, ext 0) on Wednesdays – Fridays from 12:00-4:00 pm. For more information and to purchase tickets online, go to this link. Face masks are encouraged in Horowitz Center venues.