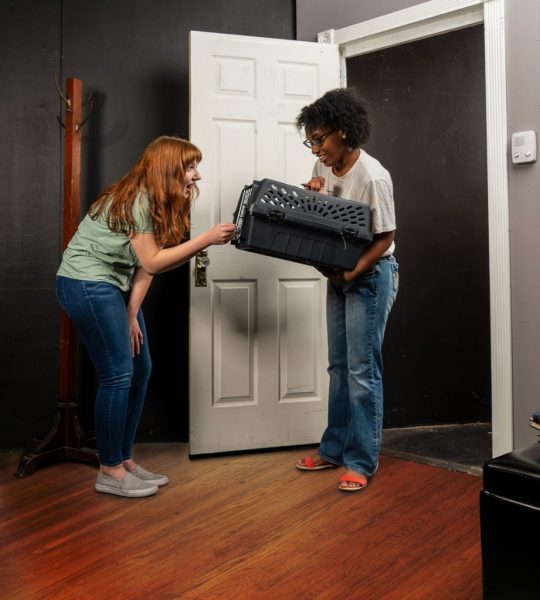 How vividly can you recall your first kiss? It is usually full of awkward moments, giggles, rushing in your ears, and your stomach in knots hoping the other person likes you as much as you like them. For most of us, that first kiss with someone we are falling in love with is a joyful triumph and usually doesn’t end in disaster. For those of us who identify within the LGBTQ+ community, there is always a level of shame, guilt, and even danger that can be associated with such a proclamation of intention. We are not always safe to publicly express who we love. This is the crux of the poignant and gripping play, “Stop Kiss” by Diana Son. In the current production at Vagabond Players, the ensemble has created an intimate, tender, heartfelt, and comedic rendition of a relevant piece of theatre that speaks to radical love and acceptance of who we truly are.

…the ensemble has created an intimate, tender, heartfelt, and comedic rendition of a relevant piece of theatre that speaks to radical love and acceptance of who we truly are.

The play weaves through snapshots in time, a hairpin structure following the developing relationship between two opposite personalities—Callie and Sara. Conflict-averse, traffic reporter, Callie, mirrors intrepid public school teacher, Sara. Neither of them truly know how to express their feelings for the other but getting so close, it hurts. The action starts on the first day they meet, followed immediately by the aftermath of a horrific hate crime perpetrated against the two. The details of this are not immediately clear to the audience, as Son carefully reveals the specifics of the assault through police interviews juxtaposed against the couples burgeoning affections. The scene are rapid-fire and every one is an emotional gut-punch of feeling, ranging from heart-break to elation and to that moment when you just want to scream in a pillow because the sexual tension is unbearable.

Azure Grimes as Sara and Morgan Wenerick as Callie were truly the evening’s highlight. Both Grimes and Wenerick shone with empathy and strength—their characters were clearly relatable. Wenerick’s comedic timing was impeccable and she brought honesty and vulnerability to the role that anchored the volatile chronology of the action. Grimes was equal parts sweet and sassy, with a hard job moving between a vivacious and utterly wounded woman. In a scene where Callie helps Sara to dress in the hospital, Grimes spoke not a word, and yet it could not have been more clear the pain and frustration she felt. To me, any actor who can tell such a clear story without speaking is deserving of the highest praise. The actors’ chemistry was beautiful, and left me feeling the warmth that Son imbued in her script. The work of intimacy director Sierra Young was evident here, as the couple navigated their feelings for one another, ultimately leading to a thoughtful and safe on-stage kiss.

Ari Juno as George was humorous and played the aloof bartender and sometimes lover of Callie with panache. Andy Belt as Peter, Sara’s long-time partner and now ex, was thoughtful and sweet, obviously still in love with Sara and trying desperately to do right by her. Tom Piccin as Detective Cole was simultaneously tough and sensitive as he eked out the truth around the horrific assault, seeing through half-truths and distrust. Kellie Santos-DeJesus as Mrs. Winsley/The Nurse played both roles with equal talent, clearly defining their personalities and mannerisms to the point where you must check the program to be absolutely sure they are the same actor.

Overall, the action was clear and well-paced, if not a little rushed in places which I feel is attributed to opening night nerves. Director Belle Burr utilized the space effectively, and there was clear attention shown to the relationships between characters. The only thing that divested me of the energy of piece were the scene transitions. The nature of the story requires many scene changes spanning weeks of time, meaning there are costume and set transitions every few minutes. This is a huge challenge. While the transitions did not drag, the music selection felt randomized and did not alway sync to the emotional through-line of the scenes, ultimately pulling me as the audience out of the incredible catharsis found by the clear tenor of each scene.

The director’s choice to update the setting from the 1990s to a more current time was clear and well supported by scenic design (Moe Conn) and props (Maeve Koch) without sacrificing the text. The contemporary NYC apartment was well constructed and felt lived in, with Callie’s personality evident. My favorite (if not a little unsettling) prop was a automatized cat that actually meowed which was an interesting and humorous addition. Lighting design by Brad J. Ranno kept the playing spaces and locations clear, a challenging task on the small stage at Vagabond. Sound design by Stephen Deininger also clearly supported the action.

“Stop Kiss” is one of my favorite pieces of contemporary American theatre and the team at Vagabond did it justice. There is heart and conscience evident, and the material remains relevant as violence against those in the LBGTQ+ community—currently and especially trans women of color—is on the rise. Stories like these that show our shared humanity need to be visible. The care taken with this production goes a long way in amplifying the importance of love and acceptance for all.