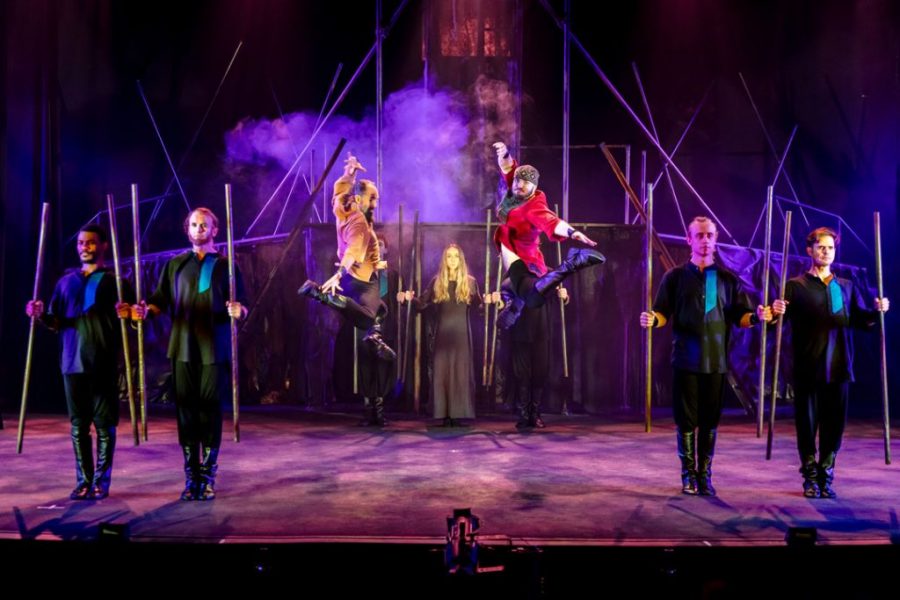 With apologies to T.S. Eliot, Synetic Theater opened its 20th season with a big bang— actually two bangs—and closed “Host & Guest” to an even bigger bang. Throughout the 90-minute production, the movement was brilliant, the energy, fierce and unrelenting, as the theme of war’s futility—with brother fighting brother—unfolded in a spectacular production that deserves to be seen by our world leaders. Before that explosive opening, director Paata Tsikurishvili bounded onto the stage to welcome the audience and acknowledge his many supporters.

…the movement was brilliant, the energy, fierce and unrelenting…Everyone should take an extra bow for this unique and inspiring work.

“We first put on this powerful play following the tragedy of 9/11. In 2008, Russia invaded my home country again, and I brought ‘Host & Guest‘ back to advocate for peace. Now in 2022, I feel déjá vu with the war in Ukraine, and the ‘Red State, Blue State’ divides here in the U.S. I feel like I am traveling in time and watching history repeat itself,” noted Tsikurishvili. His warm smile and enthusiasm for his company, especially in this work, radiated throughout the theater. No doubt this Republic of Georgia artist knows the subject all too well with his homeland so close to Ukraine. He dedicated this run to the “great people of Ukraine.”

Newly appointed Managing Director, Ben Cunis, followed with some lighthearted quips. “We are born to our family, but we choose our company,” said the former performer at Synetic. He compared making bread to a performance. “There’s more to making bread than yeast and water,” he acknowledged, “we need an oven and a cooling stand for the bread to settle. We, the audience, are those needed items as we make bread together tonight. And do let the performers you are with them.”

“Host & Guest,” based on Vazha Pshavela’s narrative poem of the same name, was first published in 1893 in Tbilisi, and it is considered to be the “masterpiece of the Georgian literature.” The plot lends itself to fantastical interpretations. Both the poem and the play deal with a conflict between an individual and a temi (community) is depicted in the epic. The principal characters in both works come to question and ultimately to disregard outdated laws upheld by their respective communities, moving forward in their personal journey toward a greater humanity.

Synetic’s new re-staging of its original 2001 production by director, Paata Tsikurishvili, and choreographer, Irina Tsikurishvili, brings to the stage some brief but much needed mysterious joy to this somber work. There’s a poignant moment when Joqola’s wife Agaza (Helen Hayes award-winner, Irina Tsikurishvili,) thinking he was dead, caresses her husband’s jacket in a dance solo reminiscent of Martha Graham’s “Lament.” Another special moment takes place soon after the men first meet. After the host kills a deer, he invites the guest to join him in this feast. Together they lift a brown blanket that represents a full-grown deer, and together their bent-over bodies jump for joy when they reach home.

The crisp, clear movement of men lacing their boots and brushing dust from their imaginary gauntlets is both touching and foreboding—brothers about to kill each other. As the host, Joqola (Dan Istrate), and his new friend/brother, Zviadauri, a Muslim, share a dinner of deer meat, the war rages on outside the home, a lean-to hut that doubles as a lookout for the fighting gangs. The battle  began when Mula (Philip Fletcher, a Helen Hayes award-winner for previous Synetic shows) rallies his boys to do harm on the visitor. Flashes of white supremacist groups bulling Blacks in our country ran through my mind. The director is not subtle in his belief in decency, humanity, and appreciation for others.

This show brings to mind other productions like Shakespeare’s “Henry V” and the “St. Crispin’s Day” speech when Henry urges his men, vastly outnumbered by the French, to imagine the glory and immortality that will be theirs if they are victorious. With bodies strewn across the stage, some are in unusual, creative poses—one perched on his stick that’s used as a gun in the opening. For these “band of brothers,” the enemy, Zviadauri (played by Vato Tsikurishvili, son of the director and choreographer), then brings his tribe to the battle, but there’s no one to cheer.

Throughout the play, the husband emphasizes over and over, “The guest is the last to die.” One of the few spoken lines in the play. And, indeed, Zviadauri remains at his host’s home, perhaps comforting the widow Agaza. Or not. This is a dark Synetic production without a silver lining. It is what Synetic is known for and why audiences jump to their feet to applaud.

I would be remiss not to mention the Lighting Designer Brian Allard, especially his effects at the closing, and Sound Designer Irakli Kavsadze for taking us to a faraway country where unfamiliar instruments play haunting melodies. The water sounds for men drinking from an unseen river was especially nice. Gogi Alexi Meskhishvili designed the set in the original production with smoke billing from the center. Everyone should take an extra bow for this unique and inspiring work.

COVID health and safety requirements: All guests 5 and older must provide proof of vaccination OR a negative PCR test along with their I.D. prior to entry. Guests without proof of vaccination or a negative test will not be admitted. Masks are required at all times in its facilities. Note the seats are comfy for the no-intermission show.