Theatre Review: ‘The Outsider’ at The Keegan Theatre 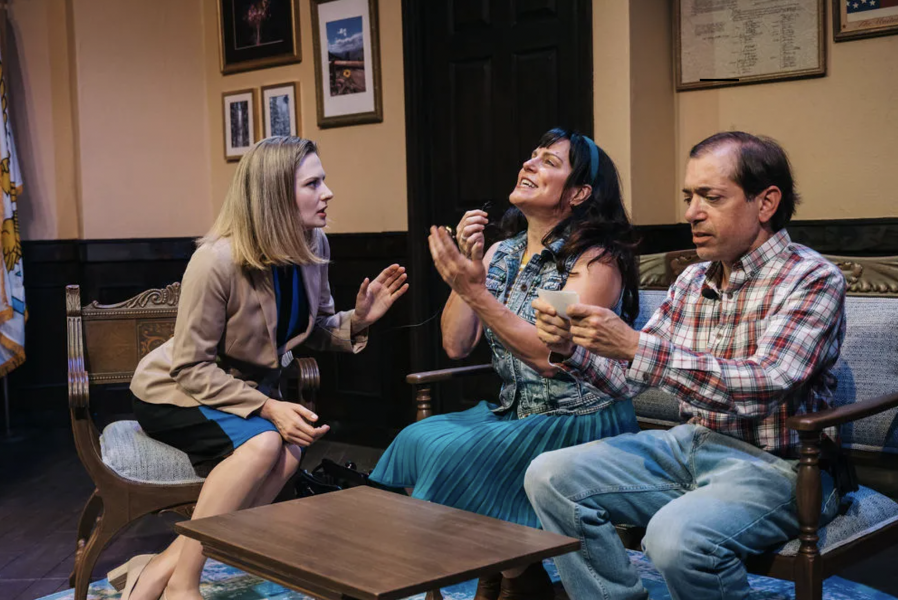 Rebecca Ballinger, Susan Marie Rhea, and Zach Brewster-Geisz in “The Outsider” at the Keegan Theatre. Photo by Cameron Whitman Photography.

“The Outsider” by Paul Slade Smith feels unstuck in time. First performed in 2015, the politics of this agreeable, light satire are those of 2008, and the tone and style evoke smart sitcoms of the mid-1970s. While I enjoyed it, I came away wondering why the Keegan chose to open its season with this show at this time.

The entirety of the play takes place in the gubernatorial office of an unnamed, mid-sized state. (The set by Matthew J. Keenan captures the blandness and attempted grandeur of many officeholders’ digs.) The lunkheaded but serious-visaged governor has just resigned because he had one consensual extramarital affair, the sort of thing that has rarely brought down a politician since Gary Hart (who is mentioned in passing). Ned Newley, the brilliant but awkward state treasurer who had reluctantly agreed to be tapped for lieutenant governor, has just ascended to the top job.

Newley (played with sympathy and heart by Zach Brewster-Geisz) is the most fully realized character in “The Outsider.” Though he first appears as a caricature of introversion—literally creeping into his office once he’s sure it’s empty—he finds his footing by letting his deserved confidence in his intellect overcome his severe social anxiety. “The Outsider” stresses the difference between being the worst person for a political job and the worst candidate to run for it. Newley is like another political figure from the 1980s, Michael Dukakis—quite good at governing, but quite bad at getting elected.

Ned’s counter is Louise Peakes (played by Keegan Artistic Director Susan Marie Rhea). A spunky and outgoing temp who has never been asked back for the second day on any job, Louise wanders into a camera shot and into politics. Louise is Sarah Palin without the vitriol and defensiveness, a genuinely sweet and caring person with no brain at all (as she cheerfully attests). Big-time political operative Arthur Vance (DeJeanette Horne), brought on board to turn Ned into a politician, finds raw talent in Louise’s ability to spit out an endless word salad of platitudes that captures the public’s attention.

Ned’s sole staff member, Dave Riley (Michael Innocenti), watches with growing horror and impotence as Arthur makes Louise into a star. Riley only works for politicians he believes in, and so has never worked on a winning campaign. He is overjoyed to see Ned as governor, only to have his hopes trampled as Ned begins to become corrupted by Arthur’s flash.

Smith’s overall message—that voters often prefer the dangerously under-qualified to those who would be wise leaders—was hardly new even in 2015, and “The Outsider” seems musty in the wake of the rise of Donald Trump. Strangely, this play about politics has never before been produced in this most political of cities—the Keegan production is its regional debut. It missed its moment.

Smith also does not trust his own writing. Overly long, Smith often presents a scene that makes its point, followed by a scene in which characters discuss what just happened to make sure the audience gets it. A romantic subplot between Dave and jaded television reporter, Rachel Parsons (Rebecca Ballinger), is set up but doesn’t go anywhere.

Director Ray Ficca’s production is fine for an evening of chuckles, but the political insights don’t go beyond those that could be found in an old episode of “Benson.” While it’s true that many of us would love to be able to vote for someone like Ned, after the last few years, we might not even be too quick to reject Louise. She at least means well.

“The Outsider” runs through September 24, 2022 at The Keegan Theatre, 1742 Church Street NW, Washington 20036. For tickets and information, click here. NOTE: Patrons are not required to show proof of vaccination, but must wear masks throughout the performance.