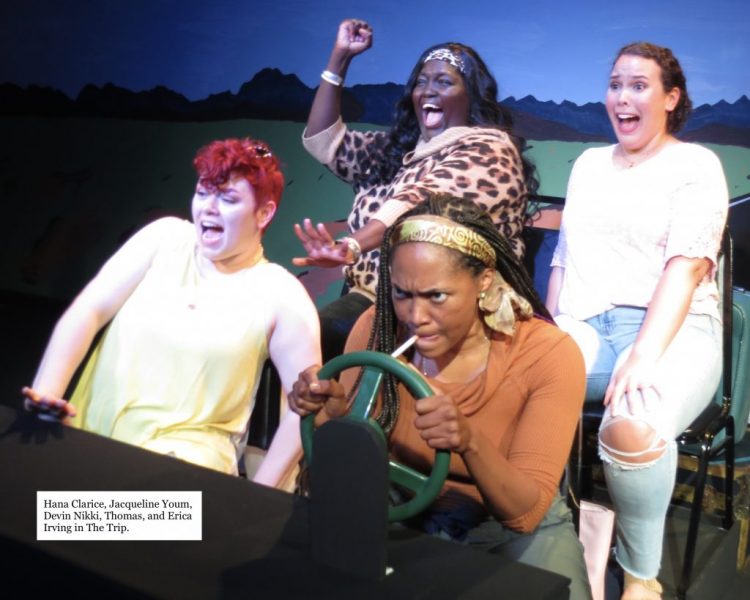 Victoria (Devin Nikki Thomas) is determined to get down the mountain as Ginny (Hana Clarice), Joanne (Jacqueline Youm), and Nikki (Erica Irving) hold on for dear life in Best Medicine Rep’s production of “The Trip” by Crystal V. Rhodes. Photo by Elizabeth Kemmerer.

Best Medicine Rep Theatre Company kicks off its sixth season with “The Trip” by Crystal V. Rhodes. Four life-long friends take two road trips, 20 years apart. The play looks at how fragile friendships are—and however close you may seem, there may be hidden agendas and ordinary incompatibilities that can overwhelm the illusion of closeness over time, across distance, and amid personal successes and failures. A true ensemble piece, all four characters equally share their stories and claim our attention.

A true ensemble piece, all four characters equally share their stories and claim our attention.

As the play opens, four young women are sandwiched together in the car as they leave Chicago and head west to Los Angeles for a two-week break from the Windy City. Cheerful good-byes from three of them are interspersed with a firm “Good Riddance!” from Jo Anne (Jaqueline Youm) immediately defining her character in opposition to her friends. They all are turning 30, but only Jo Anne is currently married and gives the appearance of someone fully in charge of her life. Ginny (Hana Clarice) gets the first shift as driver and she gamely keeps the car on the road despite the arguing, eating, and lack of alternative entertainment when the rental car’s radio is found to be broken. Victoria (Devin Nikki Thomas) smokes continually and shares with Jo Anne a childhood growing up in public housing projects. Nikki (Erika Irving) seems sweet, quiet, and accommodating but we soon learn of her sadness over her failed marriage. Nikki begins to reach for self-determination when she calls out Jo Anne for her mean comments and orders her friends to call her Nicole from now on. The disagreement with Jo Anne leads to a dramatic reveal that drives a stake firmly into the heart of the group.

The second act is set 20 years later and Ginny, attempting some leadership, invites the others on a second road trip to California in an attempt to reconnect and, in some cases, reconcile their differences. Jo Anne’s fourth (or fifth?) husband has died, Victoria has found love and had children relatively late in her life, and Nikki has married and divorced. Act Two tries to weave Nikki and Jo Anne’s broken friendship back together and into the larger tapestry of their four, intertwined lives.

Best Medicine Rep aims to “lighten our shared burden of existence for a short while.” Although the play is structurally, and in intent, a comedy, “The Trip” is oddly serious. The dialogue is at times relentlessly mean. It’s hard to imagine these women were ever very close friends, let alone would reunite after 20 years for something as intimate as a road trip. Director Yvonne Paretzky faced a huge challenge finding humor in the situations faced by these women given the sometimes dreary dialogue and constant carping at each other. The script often uses trite language (“water under the bridge” and “nail in her coffin”, for example) and resorts to the over-used trope of “funny” hot-flashes during menopause. The action is unnecessarily constrained by the single set, car interior. This might work well in a film, but on stage, there could have been more roadside moments of levity. The cramped quarters did help ratchet up the stakes and the intensity a bit—no one could escape the personal quirks and unpleasant habits of their seat mates.

The pacing in the first act is slow until the women’s focus is galvanized by a terrifying mountain road as a unity of purpose suddenly became a real moment of action. Act Two moves along quite well.

One could say fifty percent of good directing is good casting and Paretzky assembled an entertaining crew. Devin Nikki Thomas stands out in believability and for her wonderful sense of comic timing. At times, she seemed to be in a different play than the other members of the able cast, but, as a true ensemble should, the actors all support one another.

John Morogiello’s projections were delightful and helped clarify the progression of the characters’ physical and emotional journeys. Elizabeth Kemmerer’s costumes were excellent throughout, but particularly so in the second act, where they show the characters’ maturity while continuing to explore their unique personalities. The song selection for the incidental music was especially good. “Say My Name” by Destiny’s Child and “I Get by With a Little Help From My Friends” were spot on!

Running time: One hour and 50 minutes including one 10-minute intermission.